Cameron … of great significance are the actions that Britain took to wipe slavery off the high seas and off the planet.

British Prime Minister David Cameron has told Jamaican reporters that reparation is not the answer to the issue of slavery which was perpetrated by England hundreds of years ago.

According to Cameron of great significance are the actions that Britain took to wipe slavery off the high seas and off the planet.

“… So I don’t think reparations are the answer,” he said.

It was the first time Cameron was publicly addressing the matter since he landed in Jamaica shortly before 4 pm Tuesday.

The matter of reparation was high on list of concerns for Jamaicans and Prime Minister Portia Simpson Miller says she raised it in bilateral talks with Cameron yesterday, but there was no opportunity for members of the press to probe the matter.

The Press Association of Jamaica (PAJ) tweeted yesterday that the Office of the Prime Minister in Jamaica reported that the exclusion of media interviews from Cameron’s agenda was made at Britain’s request.

The PAJ then wrote letters to the British High Commission saying it found the exclusion of media interviews unacceptable. 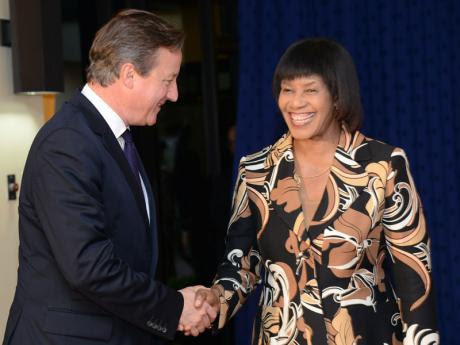 So this morning, while at Parliament Cameron made himself available for questions from the media.

He told the reporters that the £300 million infrastructure grant funding that Britain was providing for the Caribbean should not be viewed as recompense for slavery.

“It is nothing to do with that issue,” Cameron charged.

“It’s to say that actually I believe we have a shared interest. We both want the same things. We want growth, we want jobs, we want prosperity,” he said.

According to him, the grant is to be seen as a down payment on a new relationship he wants to see with the Caribbean.

“We’re not doing nearly enough,” he said. “I’m saying Britain is back here in the Caribbean saying we want to be your partners of choice and we are demonstrating with our climate funds, with this new infrastructure fund that the money is there to help build your economies and your prosperity and we’ll both benefit from that.”

In Harlem, President Maduro Pays Tribute To Malcolm and Fidel, While Denouncing “U.S. Interference” In Venezuela

In Harlem, President Maduro Pays Tribute To Malcolm and Fidel, While Denouncing “U.S. Interference” In Venezuela
We Need Your Support — Donate, Share, Sign-Up Ways to Support