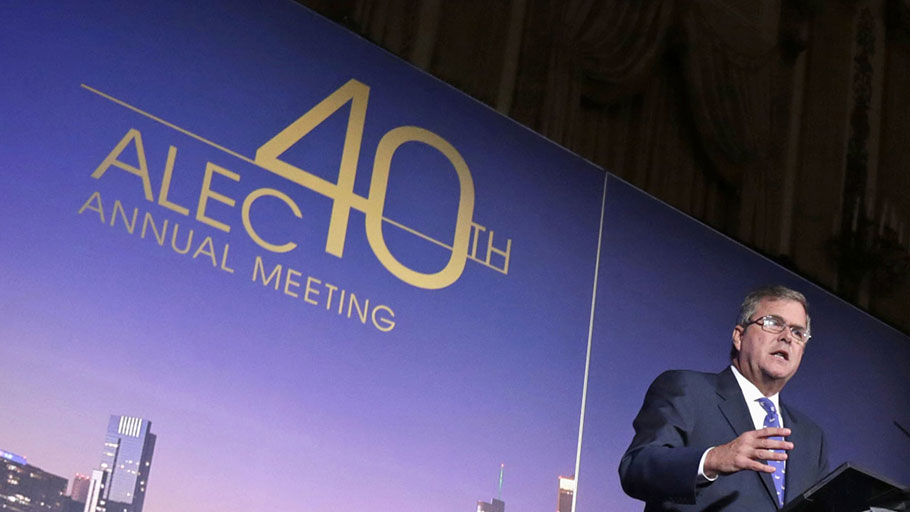 By Ed Pilkington, The Guardian —

Alec, the rightwing network that brings conservative lawmakers together with corporate lobbyists to create model legislation that is cloned across the US, has been accused of spreading racist and white supremacist policies targeted at minority communities.

A report published on Tuesday by the Center for Constitutional Rights (CCR) and other advocacy groups charges Alec with propagating white supremacy.

In one of the sharpest criticisms yet levelled at the controversial “bill mill”, the authors warn that “conservative and corporate interests have captured our political process to harness profit, further entrench white supremacy in the law, and target the safety, human rights and self-governance of marginalised communities”.

The publication comes on the eve of the latest gathering of Alec, officially known as the American Legislative Exchange Council, which will be attended by hundreds of largely Republican state-level legislators and their big business allies.

The four-day States & Nation Policy Summit will open at a resort in Scottsdale, Arizona, on Wednesday with an agenda touching on several of Alec’s core principles including “election integrity”, privatisation of education and support for homeschooling, and protection for pharmaceutical companies.

Watchdogs have also learned of a dinner to be held on Wednesday and jointly hosted by Alec and the Alliance Defending Freedom, an anti-LGBT coalition devoted to re-criminalising homosexuality in the US in the name of Christianity.

The Alec summit will be picketed by protesters convened by organisations at the forefront of the race equality movement such as Black Lives Matter and Puente Arizona. The demonstrators will seek to highlight one of the most contentious legislative moves made by Alec: 2010 Arizona law SB1070, which heralded the most extreme crackdown on undocumented migrants then seen in the US under a model bill drafted at an Alec conference the previous year.

The report, produced by CCR with Dream Defenders, Palestine Legal, the Red Nation and the US Campaign for Palestinian Rights, calls Alec a “highly effective incubator and platform for spreading a broad swath of corporate and conservative policies”.

The network, it says, amounts to a “shadow state apparatus” in which “private industry seizes control of the authority of the state, writing legislation and public policy for the general public behind the closed doors of a CEO suite”.

To support its contention that Alec is responsible for strengthening white supremacy, the joint report cites four of the network’s most hotly disputed policy interventions.

The first are the “Stand Your Ground” laws that became notorious after the 2012 killing of Trayvon Martin, an unarmed black teenager who was shot by George Zimmerman in a gated community in Florida.

In 2005, Florida had passed a “Castle Doctrine” law, SB 436, that extended the right to “stand his or her ground and meet force with force, including deadly force” to anyone in any public place who “reasonably believes” it is necessary to do so “to prevent death or great bodily harm”.

The law was picked up by Alec and turned into a model bill that, as the report points out, has now been adopted in some form in 27 states.

Alec insists it has never backed legislation allowing gun owners to attack people who pose no imminent threat and that it no longer lends its name to any “stand your ground” law.

The joint report argues the damage has already been done.

The second example used in the report is voter ID bills that require proof of identity in order to vote. CCR and its co-authors locate these efforts as part of the long history in the US of attempts to disenfranchise people of colour.

In 2009 Alec approved a “voter ID act” produced by one of its “task forces” that devise new model legislation. The provision required voters to show certain forms of personal identification before being allowed to cast their ballot.

Some 35 states now have voter ID laws. Numerous studies have found that non-white voters are much more likely than whites to lack photographic identification, and therefore face discrimination where ID is made a condition of voting.

Alec has distanced itself publicly from voter suppression efforts and says it now has no policy on voter ID.

Bill Meierling, Alec’s head of external relations, told the Guardian: “Alec members advance individual liberty and free enterprise across the states, creating opportunity for a better life for all Americans.”

He added: “Alec is routinely targeted because its member legislators are nearly 300% as effective as any other group of elected officials. In fact, this year, USA Today reported that of 10,000 bills analyzed in state legislatures from 2010-2018, 2,900 were based on Alec model policy and more than 600 became law.”

The other examples of measures allegedly supporting white supremacy cited in the joint report are “critical infrastructure bills” that originated with a 2017 law introduced in Oklahoma to clamp down on indigenous and other protesters against the Dakota Access pipeline.

Alec turned the Oklahoma template into a model bill that has spread through the US, threatening indigenous protesters with fines and jail time.

The final Alec intervention cited by the authors concerns moves to combat the boycott, divestment and sanctions (BDS) movement that seeks to pressure Israel to abide by international human rights laws.

As the Guardian reported last month, Alec has hosted discussions on banning criticism of Israel on US campuses.