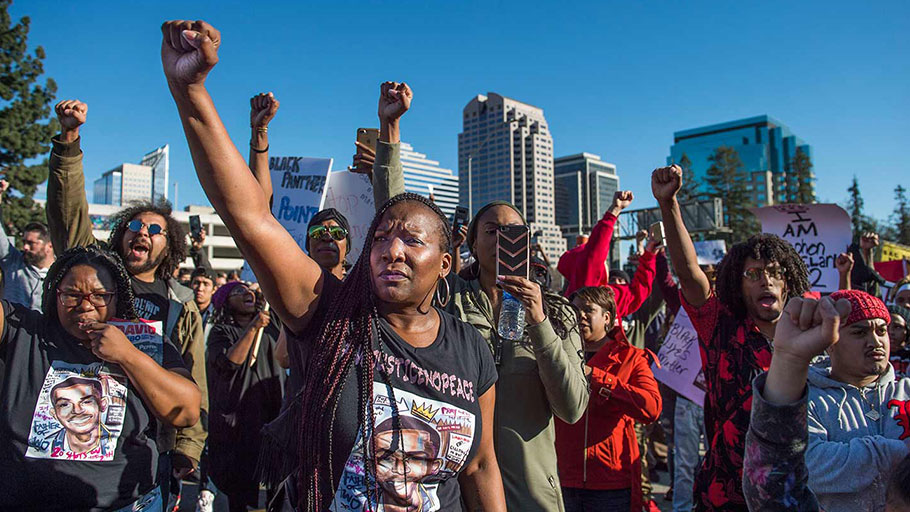 Sacramento Is Seething Over the Police Killing of Stephon Clark

You Are Here: Home » Blog » News & Current Affairs » Sacramento Is Seething Over the Police Killing of Stephon Clark

Veronica Curry and other Black Lives Matter activists and supporters during a rally on Interstate 5 in Sacramento, California, March 22, 2018. (Hector Amezcua / The Sacramento Bee via AP)

His fate has sent a collective shudder of horror through the city’s African-American community.

After the white hearse, trailed by a van from the funeral company that repaired Stephon Clark’s broken body, pulled into the Boss Bayside church in South Sacramento, dozens of mourners began filing in to view the dead man.

It was 1 pm on March 28, a hot, cloudless day, more than a week after Clark, wielding nothing more lethal than a cell phone, was gunned down by local police officers; more than a week into raucous, angry protests that have transfixed Sacramento and, in recent days, spread nationally. Black Lives Matter and an array of other groups have blockaded local light-rail stops, barricaded entrances to the city’s basketball arena before games—getting into angry verbal confrontations with fans who tried to enter—blocked freeways, stormed a city-council meeting, and surrounded the county DA’s offices with chanting, placard-waving protesters.

Twenty-two-year-old Clark was shot multiple times on the evening of March 18, after Sacramento police responded to reports that a young black man had been going up and down a street breaking car windows. He was spotted by a circling police helicopter, tracked down in what turned out to be his grandparents’ backyard by two officers, and brought down in a hail of bullets.

Clark’s elderly, disabled grandparents heard the shots, called the police to notify them of the gunplay, and then sat in their living room talking to the responding officers at length about what they had heard. At no point did the officers tell them that the Sacramento police had shot someone in their backyard. Only after they had left, when the grandmother pulled back the blinds and looked out the window, did they realize that there was a body in their garden, and that that body was their grandson. There is, even by the cruel standards of this era, a peculiar grotesquerie to this macabre sequence of events.

“Say his name: Stephon Clark!” chanted several hundred demonstrators repeatedly. Some of them were affiliated with Black Lives Matter, others with a local group called Voices of Youth, still others with an activist organization named Law Enforcement Accountability Directive. They challenged DA Anne Marie Schubert—who has avoided indicting officers in excessive-force cases in the past—to prosecute the two officers who shot Clark. “No justice, no peace!” they cried. “Indict; convict; send those killer cops to jail!” “The whole damn system is guilty as hell!” “You shoot us down, we shut you down!”

Says Tanya Faison, founder of the local BLM chapter, “We’re hitting things at city, county, and state level. We want the officers to get fired, and we want the DA to press charges.” And if that doesn’t happen? “We always escalate. Putting pressure on officials, the community, to show up with us; and we’re doing it in the most creative way possible.”

The protests in California’s capital city—a city that has, over the past year, helped craft the national political opposition to Donald Trump—present a peculiarly difficult challenge for local leaders. Mayor Darrell Steinberg, previously California Senate president pro tempore and a man who prides himself on his progressive values, is walking a tightrope, trying to preserve order in his city, trying not to alienate his law-enforcement agencies; he is also acutely aware of the anger here at Clark’s death. “It’s a very difficult time,” he admits, a day after California Attorney General Xavier Becerra announced that his office would supervise the investigation into Clark’s death. “Our job is to keep the peace and achieve justice and change. We’re going to continue to listen to the pain and the grief, and work together to minimize the risk that people get hurt. That’s our focus.”

Clark has become a symbol as potent as that of Trayvon Martin, Eric Garner, and the myriad other men and women of color killed by police in recent years.

As of Thursday, the day of Clark’s funeral, the White House hadn’t reached out to Steinberg to offer support, had issued no comment on the police killing, and had not sent condolences to Clark’s family. The Justice Department has remained similarly mute as the protests have intensified. Absent federal efforts to tamp down the volatile situation, the burden has fallen squarely on the Sacramento leadership, leaving Steinberg trying gamely to “be most supportive of the family,” while also keeping the capital city functional. He talks of increasing police training on how to chase down misdemeanor suspects, and he talks of the need to better recognize, and deal with the consequences of, implicit bias among police officers. “We must,” the mayor says, “put as much time and effort into de-escalation as we do teaching how to use a firearm. We are in a moment where intensifying our effort around implicit bias is key.”

Faison dismisses these efforts. The mayor, she believes, is fence-sitting, “just talking” instead of taking meaningful action. And so BLM has decided to escalate, its demonstrations getting bigger and noisier by the day. Heading into the weekend, there is clearly potential for the protests to spiral out of control. There is a feeling of menace in Sacramento, born of anger at yet another entirely avoidable, pointless killing at the hands of law enforcement. The Sacramento Bee has reported that regional, county, and city police and sheriffs have killed 16 people in the past two years, three of whom were unarmed, and several more of whom were armed with weapons other than guns. Only a few of those 16 were firing guns or reaching for guns when shot.

In the space of little more than a week, Clark has become a symbol as potent as that of Trayvon Martin, Eric Garner, and the myriad other men and women of color killed by police in recent years. His fate has sent a collective shudder of horror through Sacramento’s African-American community. “My own son always say, ‘Mama, the police searched me, and they stopped my car,’” explains Barbara, a 60-year-old prayer-meeting friend of Clark’s grandmother Barbara, who had come to pay her respects and didn’t want to give her last name, added, “They’re always harassing that way.”

Boss Bayside, a drab concrete structure, looks more like a low-end office building than a house of worship. It is surrounded by warehouses—a FedEx truck pulled out of the parking lot just after the hearse pulled in—and the warehouses are surrounded by overgrown empty lots, the whole block backing onto Highway 99. Across 44th Street, empty lots alternate with bungalows and low-end apartment complexes, the inner doors to each apartment barricaded by a white metal outer security door. Around the corner, on a long, desolate patch of road abutting the highway’s concrete noise barriers, several abandoned shopping carts form islands on the asphalt.

“They target us like we’re bears or wildlife out here.”

The church hosted Clark’s wake on the 28th and, on the following day, his funeral, which was presided over by Al Sharpton. An hour before the funeral began, the chapel and the overflow room were already full. Several hundred more mourners, many of whom had taken time off work to be there, stood in line in the parking lot outside, gamely hoping for late admission. Their presence is a testament to the grief and fury unleashed by this latest law-enforcement killing of a young, unarmed black man.

Clark may or may not have been vandalizing cars the night he was killed. But that’s entirely beside the point. Whether he was a “good” person or not, however that word is defined, is also beside the point. What is relevant is that a young father of two sons, and a caregiver for his disabled grandparents, was gunned down despite the fact that he presented no clear and credible threat to the officers who shot him. The police fired no warning shots and made no effort to shoot to wound, but instead shot repeatedly, and then, according to multiple reports, handcuffed Clark’s body after he was clearly dead.

Clark’s grandmother’s friend Barbara felt that “we are all of the rainbows of God. It’s a life lost, and children left behind. It saddens my heart.” But she wasn’t just sad, she was angry. “They target us,” she said, “like we’re bears or wildlife out here.”