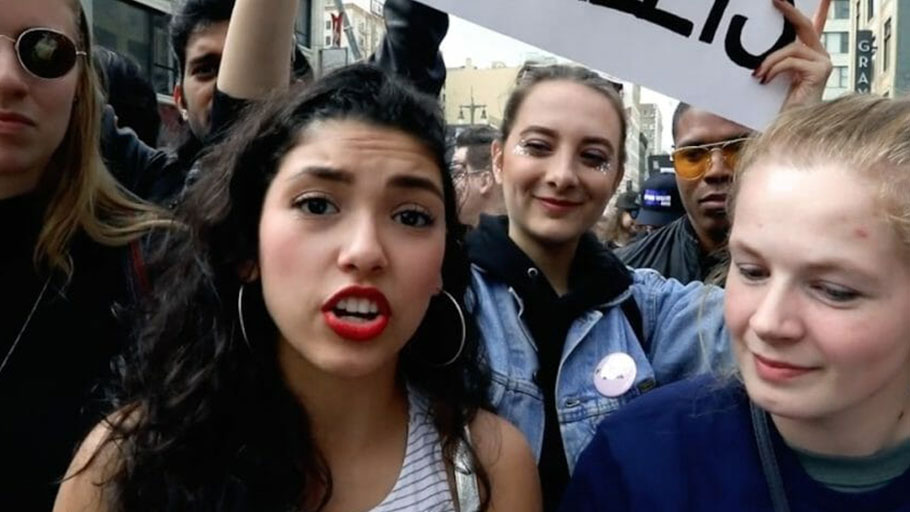 You Are Here: Home » Blog » Commentaries/Opinions » Why Focusing on People of Color Will Help the Movement for Gun Control Succeed

Protesters against gun violence at the March for Our Lives in Los Angeles. (Rising Up With Sonali / Vimeo)

Any discussions of gun violence and the regulations needed to curb it are incomplete unless they include an analysis of how racism plays a role. Government data show that “black Americans are, on average, eight times more likely to be killed by firearms than those who are white.” Gun violence by police against ordinary Americans also disproportionately affects people of color—a fact that the Black Lives Matter movement has been organizing around for six years. Thankfully there is a strong connection growing between the movement and the burgeoning youth-led push for gun control.

Only a week before the historic March for Our Lives protests that drew more than a million people out on the streets of the nation’s capital and other cities, law enforcement officers fatally shot a 22-year-old black man named Stephon Clark in his own backyard in Sacramento, Calif. The police story of Clark’s killing followed a familiar script: He matched the description of a suspect, and officers shot at him because they thought he had a gun and feared for their safety. After firing 20 bullets into Clark’s body, police handcuffed the dying young man before starting medical procedures to try to save him. Ultimately, Clark was found to have been “armed” only with a cellphone.

Just two days before the March for Our Lives, local activists and residents protested Clark’s killing. They showed up at Sacramento’s City Hall, blocked traffic on Interstate 5 and even delayed the start of an NBA game. They made it clear, as other Black Lives Matter protests have been doing, that there will be no business-as-usual while black people continue to be murdered by police.

Over the past several years, Black Lives Matter has repeatedly attempted to make the case to the American public that black lives need to matter because at present they simply don’t. Clark’s life clearly did not matter to Sacramento police, just as the lives of countless unarmed black men and women have not mattered. Even in the most well-documented and blatantly unjust police killings, such as that of Alton Sterling in Baton Rouge, La., authorities have refused to prosecute killer cops. Meanwhile, Nikolas Cruz, the 19-year-old white man who confessed to massacring 17 people with an assault rifle at Marjory Stoneman Douglas High School in Parkland, Fla., was easily captured alive by police, just as so many other white, male, mass shooters have been.

It was in Florida, where the massacre took place and where the new movement for gun control originates, that Trayvon Martin was gunned down by George Zimmerman six years ago. It was that specific instance of gun violence that gave birth to the now-famous hashtag, #BlackLivesMatter. In the years since the coining of that profound phrase, black activists have led movements all over country, relentlessly drawing attention to how gun violence—by vigilantes as well as by police—affects African-American communities, and demanding justice for victims of that violence.

While the largely white Parkland survivors appear to have been embraced more wholeheartedly by mainstream America for their courageous fight to end gun violence than Black Lives Matter was, the young activists have shown themselves to be critical thinkers. One white student, Jaclyn Corin, said during her speech at Saturday’s rally in Washington, D.C.: “We recognize that Parkland received more attention because of its affluence, but we share this stage today and forever with those communities who have always stared down the barrel of a gun.” Student activist David Hogg called out the media for failing to include the voices of black survivors of the Parkland shooting, even though a quarter of the students at his school are black.

The organizers of the March for Our Lives did a far better job of centering the voices of people of color than the mainstream media did. Some of the most powerful and noteworthy speeches in D.C. were by black and brown speakers, most of them young girls. Yolanda Renee King, the 9-year-old granddaughter of Martin Luther King Jr., demanded a “gun-free world” in the name of her grandfather’s legacy. Parkland survivor Emma Gonzalez brought masses of people to tears with a powerful silence during her speech that lasted the same duration as the school shooting. Eleven-year-old Naomi Wadler proudly represented black women and girls who have been victims of gun violence. And 17-year-old Edna Chavez, from South Central Los Angeles, who lost her brother to gun violence, described how she “learned how to duck from bullets before I learned how to read.” And attendees at the march appeared to be a diverse representation of black and brown communities.

Black journalist Jason Johnson, who attended the rally and march in D.C., published an account of it in The Root, titled “Yes, the March for Our Lives Was About Black People, Too—and It’s About Time.” Johnson lauded the Parkland students’ decision to use their privilege to broaden their struggle. “If you have to wrap some Black Lives Matter rhetoric in L.L.Bean and Lululemon in order to get some press coverage and meaningful change, I’m all for it,” he wrote, adding that the speaker list offered a “seamless organic integration of black perspectives and black lives.”

Rachel Gilmer, co-director of Dream Defenders, a black-led Florida organization formed in the wake of the Martin killing, wrote an op-ed in USA Today about how black organizers joined the March for Our Lives. “We shouldn’t conflate the bias in the Parkland students’ reception with the students’ own politics,” she wrote. “They don’t have to be told that they have privilege, and they have been among the most vocal in calling attention to the plight of communities of color.”

Even Lucy McBath, whose 17-year-old son, Jordan Davis, was killed by a white gun owner, explained why she was “proud” to attend the march: “Inspiring young people—no older than my Jordan was when he was taken from me—are demanding a better future from our leaders and each other.” She drew a critical link between the core intersecting issues, saying “I will march for my son, for [Stephon] Clark and for all the black men and women, boys and girls, affected by racism and gun violence.”

When Black Lives Matter activists challenged the Democratic Party during the 2016 primary elections and insisted that racial justice be an integral part of any progressive electoral platform, their demands and activist strategies often were misunderstood by mainstream Americans. They were even derided for their steadfastness by the so-called liberal adults in the room, including the nation’s first black president, the candidate who might have become the nation’s first female president and her husband, a former president.

So one might have forgiven the young students who now lead the movement for gun control if they too had failed to address the racial aspect of violence in our society. But thus far, they seem to instinctively understand the importance of demonstrating that all lives matter equally to them, even if American society has deemed the lives of people of color to be less worthy than white lives. That understanding is precisely what will help the linked movements succeed.