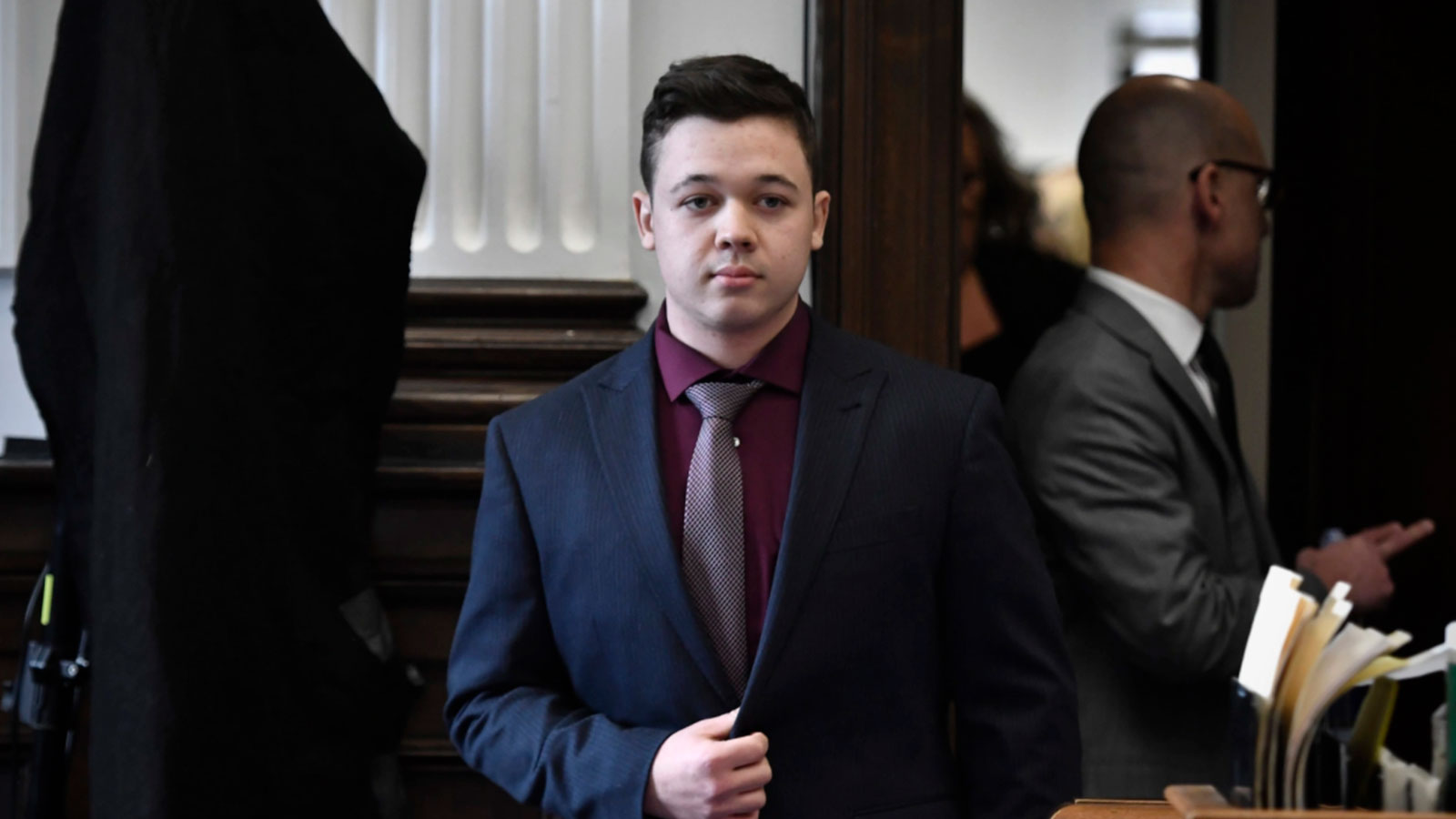 ‘Sad and angry and frustrated’: Black moms on the Rittenhouse verdict

You Are Here: Home » Blog » News & Current Affairs » ‘Sad and angry and frustrated’: Black moms on the Rittenhouse verdict

Many parents of color see the not guilty verdicts as just one example of what their children face every day.

Last week a 12-person jury acquitted Kyle Rittenhouse of all charges related to his shooting and killing two people and injuring a third during a Black Lives Matter protest in the summer of 2020. Rittenhouse argued that his actions were self-defense. After deliberating for four days, the jury agreed.

Many expressed genuine shock about the verdict on social media, posting tweets detailing their surprise. But for Black mothers and other parents of color who spoke to “TODAY” Parents, the verdict was no surprise at all.

Each of the mothers say that far too frequently, they see just how differently their own children are treated compared to their white counterparts. And while Rittenhouse’s lawyers said the case was about self-defense, these moms say that, based on their experiences, race played a role. Their lack of surprise is also the result of other verdicts involving young Black victims, from Tamir Rice to Trayvon Martin to Michael Brown.

“Surprisingly, I felt really sad and angry and frustrated,” said Jehava Brown, 37, a mother of three boys living in Pennsylvania. “And when I say ‘surprisingly,’ it’s because it was very much expected.”

Legal experts said Rittenhouse’s taking the stand and crying during his testimony, in addition to his mother’s audibly crying in the gallery during the trial, may have helped his lawyers win the case. After the verdict, Rittenhouse told Fox News’ Tucker Carlson that he supports the Black Lives Matter movement and “is not a racist.”

“He was 17 at the time of the offense,” said Steven Wright, a law professor at the University of Wisconsin. “Having someone who looks like a child there might make some jurors see their younger selves in him or their children in him, and they might think, ‘What would my younger self have done or my son or daughter have done in his position?’”

The parents who spoke to “TODAY” wonder when their tears and the tears of their children will ever have the same impact.

“Black moms deal with a lot, and we have to compartmentalize in order to put smiles on our faces and move forward,” Brown said. “Because either people don’t get it or they think it’s ‘too heavy’ or it’s ‘too frustrating’ or it’s ‘too much of a debate.’”

Brown said the verdict is a microcosm of what her children face in school, on playgrounds and in public; these experiences exemplify the ways Black children are seen as innately threatening, while white children are viewed as innately innocent.

Her children have started to notice in school that, “depending how they dress, their teachers will treat them differently,” Brown said. “If a Black kid is reprimanded unjustly, the reaction is: ‘Well, we don’t know the whole story. It can’t just be what we saw.’ It’s automatic to justify the reasons behind a harsh punishment for a Black kid, while white kids get the benefit of the doubt. And people are less likely to speak up for Black kids because they think maybe they did something to provoke the situation.”

Hill, 52, said she sees the system at work when she watches how her two children are treated differently based solely on their skin tone.

“I have two beautiful daughters, and one looks white, and she is treated differently. People don’t realize that I’m her mom until she clarifies it,” Hill said. “My other daughter is … dark … and I have watched my own children be treated differently, whether it’s at a park or at school, because they’re completely different shades.”

Hill said that when she enters a store with her two daughters, people will watch and even follow her and her older daughter, but “no one pays attention” to her younger daughter, who presents as white.

“So am I surprised by the verdict? No,” she said. “As a Black person in this country, I am not surprised. And as a Black parent, I worry about my children’s safety.”

A study published this year by Elsevier in the Journal of the American Academy of Child and Adolescent Psychiatry found that Black students ages 9 and 10 are 3.5 times more likely to be suspended or put in detention than their white peers are. In another study, conducted by researchers at the Yale University Child Study Center in 2016, scientists fit 132 early education teachers with eye trackers and asked them to watch clips of four children — a Black girl, a Black boy, a white girl and a white boy — and to look for misbehaviors. None of the children actually misbehaved, but the eye trackers found that the teachers spent more time watching the Black boy.

“I go to Black and brown schools and find that there’s a perception that these kids have the potential to do something wrong — a potential of violence, a potential of wrongness, the potential to lie,” said Christoper Emdin, the associate director of the Institute of Urban Minority Education at Columbia University. “It’s the belief that the worst is expected of them and they’re treated accordingly.”

Emdin said he sees a different situation at play in predominantly white schools.

Thomishia Booker, 37, a mom of two kids ages 5 and 20 months, said her older child was only 2 when a day care worker treated him differently from his peers.

“The teacher was concerned about him making Legos,” Booker said. The teacher said her son “was building a gun,” and “I asked her how she knew, and she said because my son was making an ‘L’ shape and shooting sounds — ‘pew pew pew.’ She made an assumption about the limitation of his creativity, and an assumption about what he was making, which had to be a gun.”

Booker added that the teacher also deprived her son of having a childlike creativity, because many of her son’s favorite superheroes have guns or other shooters. “Instead, she saw my son as aggressive and had to have a conversation with me about it.”

Research published in 2012 by the American Psychological Association found that Black boys as young as 10 are not viewed in the same light as their white peers and are instead mistaken as older, are perceived guilty instead of innocent and face police violence if they are accused of crimes.

“I can’t say the Rittenhouse verdict has made me feel hopeless, because the hope has already been lost,” Booker said. “I can only do what I can as a mother and as a parent to protect my children. But it’s difficult to do it alone in a system that’s specifically designed to only protect one group of people.”

The Rittenhouse verdict “made me feel hurt, knowing the world hasn’t changed and will not change,” said Tammy, 26, who has a 2-year-old and an 8-year-old step-daughter. “My kids are people of color, and there’s no doubt as they get older they will experience some racism and/or notice how people around the world view them.”

Tammy, who asked that her last name be withheld to protect her family’s privacy, said her step-daughter is already noticing how others perceive her hair.

“She has beautiful big curly hair, and now she wants to straighten it,” she said. “I always tell her no, and I can see that it upsets her. She doesn’t want her curly hair anymore. She says she wants straight hair like the girls at school. And that hurts my heart, because her hair is beautiful.”

Sentiments like the ones shared by Tammy’s daughter inspired Emdin, of Columbia University, to enter education. “When I started doing my work, it was to create the conditions that allow Black children to have the freedom to simply be,” he said. “Basic things like the right to be there, the right to be in a school building without someone thinking they’re trying to steal things or cause a problem.”

Emdin said children of color need the right to emote without having their emotions be seen as fundamentally nefarious.

“If I’m quiet, it’s ‘Why are you so sinister?’” he said. “If I’m laughing, it’s ‘Why are you high?’ If I’m upset at something, it’s ‘You’re out of control.’ Black and brown kids have the right to be and to feel and to express those emotions without being seen as a criminal but as a child.”

That’s what Suka Nasrallah, 31, said she wants for her three children, ages 8, 6 and 4. She said the Rittenhouse verdict made her feel sad for her children, who are a visible minority as Muslims living in Canada.

“I have been exposed to racism many a time before and continue to on a regular basis. I’ve been living it since I was very young,” Nasrallah said. “But it breaks my heart to know my children will be exposed to such hate through no fault of their own.”

A 2017 study found that 42 percent of Muslim children in K–12 schools reported being bullied because of their faith. The study also found that teachers, school officials and other staff members have themselves participated in 1 in 4 bullying incidents that involved Muslim students.

“I felt like my hands were and will remain tied and no matter what may happen in the future, my children will not have a fair and fighting chance because the world we live in today has a preference,” Nasrallah said, “and we are not the first, second or third choice, for that matter.”

Booker said: “Black women are often reluctant to express their full range of emotions and have to worry about how they will be perceived. We aren’t allowed to be angry and express how we really feel. We are pleading for our children’s lives, but our cries go unheard.”

Featured image: Kyle Rittenhouse enters the courtroom to hear the verdicts in his trial before he is found not guilty on all counts at the Kenosha County Courthouse in Kenosha, Wis., on Nov. 19. (Sean Krajacic, Getty Images)