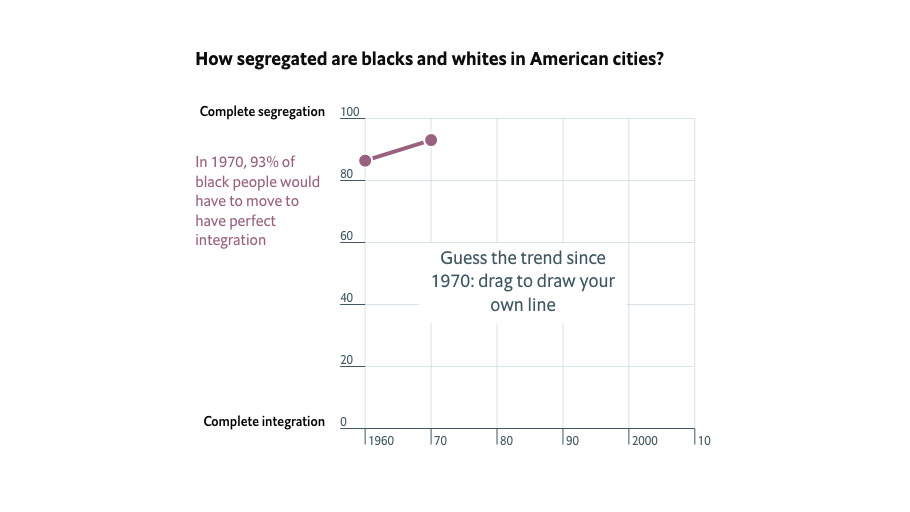 Where a divided nation stands, half a century after Martin Luther King’s death

By The Data Team, economist.com —

FIFTY years ago, when Martin Luther King was assassinated, America was a nation on the edge. The ensuing riots in more than 100 cities seemed to threaten the entire project of civil rights. Despite the landmark legislation passed in the 1960s, including the Civil Rights Act, Voting Rights Act and Fair Housing Act, the country remained starkly divided along colour lines. One society was white, the other black—separate and unequal.

What strides has the nation made towards integration? The most common measure used by social scientists of segregation is referred to as the black-white dissimilarity index—which ranges from 100, meaning complete clustering of black people in separate neighbourhoods, to 0, which represents a perfectly even distribution. In 1970 the dissimilarity index was an astonishing 93 for American cities—meaning that 93% of blacks would have had to move to produce a completely integrated city.

Using the interactive above, you can draw your guess for how American racial segregation has evolved since 1970. We’ll show how your guess compares to the actual data—and to the typical guesses of other readers.

The data, calculated by the academics Richard Sander, Yana Kucheva and Jonathan Zasloff for their forthcoming book “Moving Toward Integration”, show a substantial improvement in residential integration between 1970 and 1980. Since then, racial segregation has dropped more slowly. In 2010, the date of the most recent census, the dissimilarity index stood at 70. Despite widespread concerns about backsliding, that figure is the lowest in the past half-century, though it remains high in absolute terms.

For most of American history, black people have suffered the greatest discrimination in the South. When it comes to residential integration, however, cities in the region have made great strides. In contrast, northern Democratic strongholds like New York, Chicago and Philadelphia seem stuck in the past: not only are they among America’s most racially segregated cities, but they have also shown the least improvement. In 1970, New York’s dissimilarity index was 86%. The index has barely budged since then, and now stands at 84%. 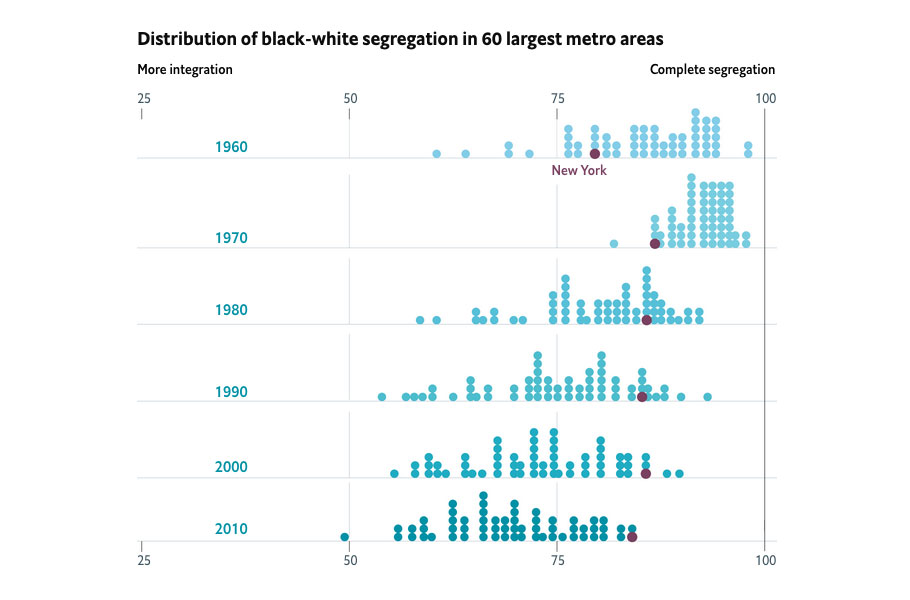 The human costs of such stagnation are enormous. David Cutler and Edward Glaeser, two economists, have calculated that young blacks in highly segregated cities have dropout rates that were 19% higher and wages that were 16% lower than those in more integrated cities do. Black people living in such racial enclaves suffer unusually high rates of unemployment, mortality and single-parenting. 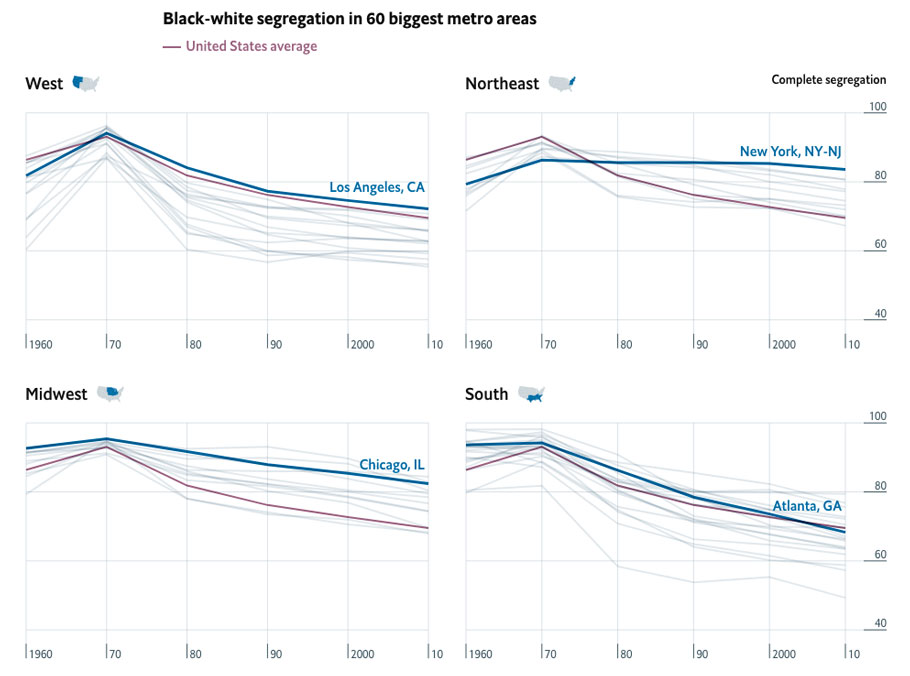 Another aim of the civil-rights era was to dismantle legally enforced school segregation. The Supreme Court officially invalidated “separate but equal” arrangements in its 1954 decision Brown v Board of Education. Nonetheless, obstinate school districts remained heavily segregated for more than a decade afterwards—until federal courts began enforcing mandatory integration orders. As with housing, it is possible to calculate a black-white dissimilarity index for elementary-school students, and observe how it has changed with time. Contrary to the idea that American schools are resegregating, the dissimilarity index does not appear to have changed much since 1980—after much improvement the decade before. It was near 80 in 1970, and is now 47. The same is true of the South, where school segregation and opposition to court-ordered integration schemes were highest. 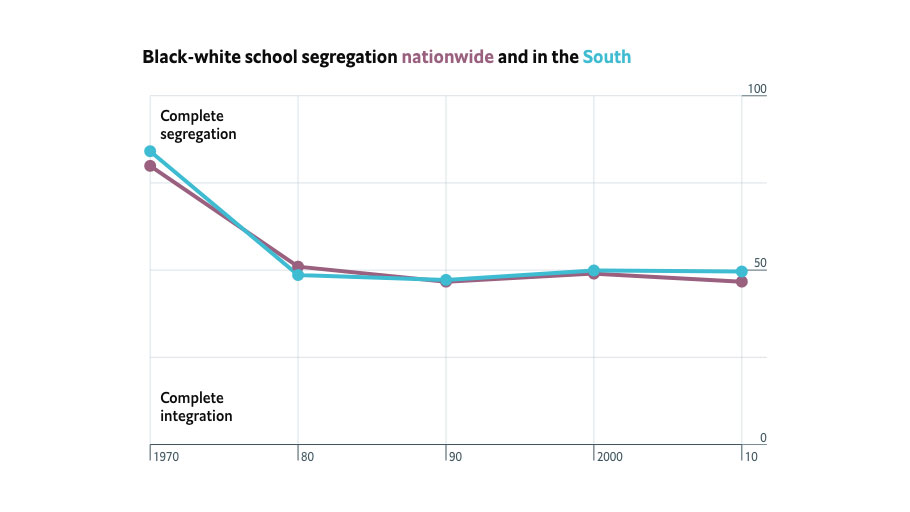 But despite the halting steps forward America has taken with regard to racial segregation, the country is indeed coming apart in another way: along the lines of wealth. Just as poverty is concentrated in a few neighbourhoods, so too are the wealthy increasingly cloistering themselves in fewer and fewer rich enclaves. Worsening income inequality seems to be driving this dispiriting trend. And the reduction in racial housing discrimination has enabled middle- and upper-class blacks and Hispanics to move away from minority neighbourhoods—leaving the poor behind and stuck in place. Public schools are also starkly separating along class lines. Between 1991 and 2012, segregation of poor pupils rose by 40%. 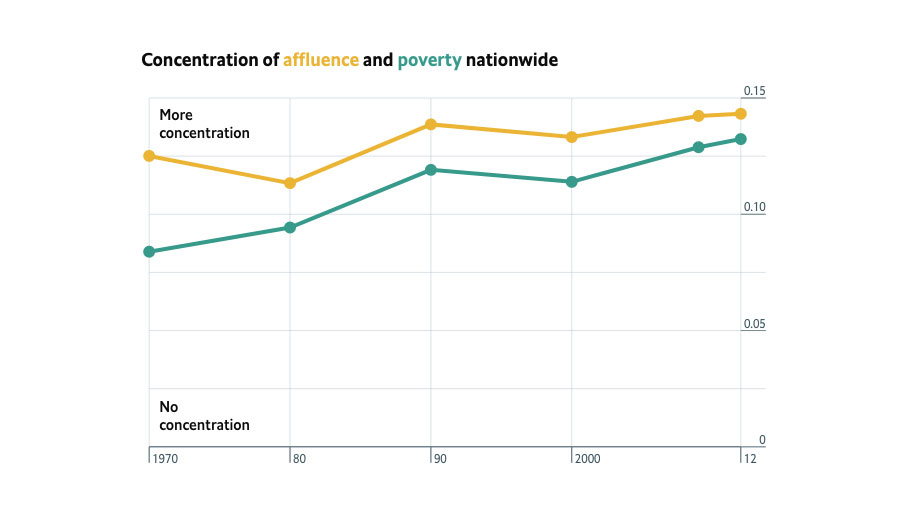 For those concerned about the flagging American dream, this unwinding is disturbing. The human costs to children growing up in concentrated poverty run deep, increasing the chances of incarceration and premature death. Worse, it often harms the next generation as well. Research by Patrick Sharkey, a sociologist at New York University, shows that children living in ghettos have considerably worse outcomes than their better-off peers—but those whose parents grew up in similarly desperate milieus do even worse. Since 2000, the number of Americans living in extremely poor neighbourhoods has nearly doubled, from 7m to 14m.

Half a century since the death of America’s most prominent civil-rights icon, race is no longer destiny. Overt housing discrimination, which kept black communities tightly packed into confined, cordoned-off neighbourhoods, has been all but eliminated, though subtler forms still exist. Today, those who can afford to move to better neighbourhoods are able to. Of course, race and class remain tightly intertwined. The left behind—those stuck in place—face the harsh, self-reinforcing consequences of poverty. A disproportionate share of them are black and Hispanic. For those who want a good life for themselves and their children, race does not matter as much as it did when Dr King was murdered 50 years ago. But it still matters too much.