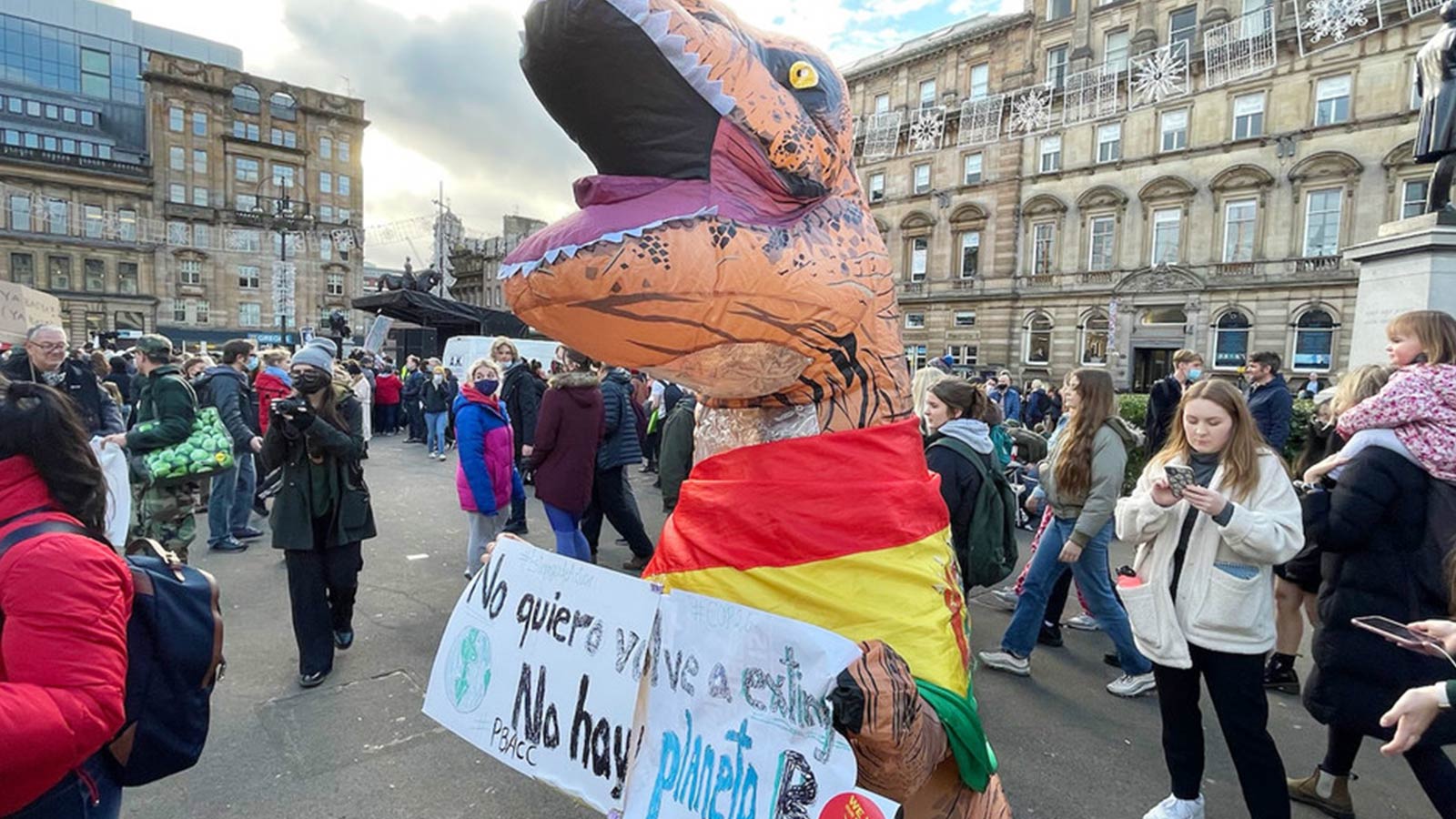 One element that runs through all social movement climate summits is their rejection of the official meeting of the United Nations Framework Convention on Climate Change (UNFCCC) and the low ambition of its outcomes – and the treaty’s 26th Conference of the Parties (COP26) was no exception.

The leaders of the UNFCCC gladly welcome those responsible for the crisis and “COP26 hasn’t done anything more than simulation and greenwashing,” Mitzi Jonelle Tan, a member of the non-governmental organization Youth Advocates for Climate Action from the Philippines, told IPS during a rally at the Glasgow Screening Room, a few blocks from the venue where the official meeting is being held until Friday, Nov. 12.

The COP26 Coalition, the alternative summit to the climate conference, has been a motley crew of organizations and movements whose common demand was a real effort to fight the climate crisis through concrete and fair measures and whose 200 events in this Scottish city included workshops, forums, artistic presentations and protests, which ended on Wednesday, Nov. 10.

Among the demands with which the alternative meeting in Glasgow lobbied the 196 Parties to the UNFCCC were the abandonment of fossil fuels, the rejection of cosmetic solutions to the climate emergency, the demand for a just transition to a lower carbon economy and the call for reparations and redistribution of funds to indigenous communities and the global South.

The movement also called for a gender perspective in policies, climate justice – that those primarily responsible (developed nations) take responsibility and pay for their role -, respect for the rights of indigenous peoples, and a halt to air pollution.

Due to logistical issues and the limitations imposed by the covid-19 pandemic, which postponed the official summit for a year, the parallel sessions of the social movements were held in this Scottish city in a hybrid format, combining face-to-face and virtual participation. Exhibitors and online participants struggled with the quality of their internet connections.

One of the most unanimous and loudest criticisms from non-governmental social and environmental organizations focused on the exclusion of civil society groups from Latin America, Africa and Asia, due to the UK host government’s decision to modify the admission criteria according to the level of contagion in each country and the extent of vaccination.

In addition, they complained about the strict hurdles imposed by the COP26 presidency, held by the United Kingdom, supported by Italy, to the presence of NGO observers at the official negotiating tables, which undermined the transparency of the Glasgow process, whose agreements are to be embodied in a final declaration, which is weakening every day and whose final text will be released on Nov. 12 or 13, if the negotiations stretch out.

The alternative movement also had a formal but unofficial space in the so-called COP26 Green Zone, located in the same area as the official negotiations, in the center of Glasgow.

One of their key proposals was for a Fossil Fuel Non-Proliferation Treaty aimed at moving towards the end of the era of coal, gas and oil, the consumption of which is primarily responsible for the growing planetary climate emergency.

The initiative, which imitates the name of the treaty against nuclear weapons, demands an immediate end to the expansion of fossil fuel production, a fair phase-out and a just energy transition.

“Countries and corporations keep investing in the production of the stuff. We need to see efforts to leave out fossil fuels, stop financing, subsidies and exploitation of fossil fuels,” Tzeporah Berman, the Canadian chair of the anti-fossil fuel initiative, told IPS.

The idea for the treaty emerged in 2015 from a call by leaders and NGOs from Pacific island states – whose very existence is threatened by the climate crisis – and it was formally launched in 2020.

So far it has received the support of some 750 organizations, 12 cities, more than 2,500 scientists, academics, parliamentarians from around the world, and religious leaders, indigenous movements and more than 100 Nobel Prize winners.

Climate policies are the focus of COP26 which has addressed carbon market rules, at least 100 billion dollars a year in climate finance, gaps between emission reduction targets and necessary reductions, strategies for carbon neutrality by 2050, adaptation plans, and the working platform on local communities and indigenous peoples.

Indigenous people and rights of nature tribunal in the spotlight

Indigenous people, especially from the Amazon jungle, have been key participants at the latest edition of the alternative summit, with at least 40 activists present in Glasgow to complain about harassment by the government of far-right Brazilian President Jair Bolsonaro and demand more protection for the rainforest, whose destruction can have dramatic effects on the environmental health of the planet.

“Our main demand is demarcation of our territories,” because this guarantees a number of rights, Cristiane Pankararu, a member of the Pankararu people and leader of Brazil’s non-governmental National Association of Indigenous Women Warriors (ANMIGA), told IPS.

Her organization belongs to the Association of Indigenous Peoples of Brazil, whose demands are demarcation, climate solutions based on indigenous peoples’ knowledge and practices, and investment in forest protection.

One of the most symbolic activities of the counter-summit was the Fifth International Rights of Nature Tribunal, which tried the cases of “False solutions to the climate change crisis” and “The Amazon, a threatened living entity”.

In the first verdict, the tribunal, which sat for the first time in 2014 and was composed this time of seven judges from six countries, found the UNFCCC at fault for failing to attack the roots of the climate emergency.

In the second ruling, the jury, composed of nine experts from seven countries, accused developed countries and China, as well as agricultural, mining and food corporations, of destroying the Amazon, the planet’s main rainforest ecosystem, which is threatened by these extractive activities.

Nick Dearden, director of Global Justice Now, listed three serious problems: the role of large corporations, the protection of corporate intellectual property, and the power of corporations to sue states that want to protect the environment, in international arbitration tribunals.

“It’s a deep symptom of how the global economy protects the interests of big corporations, especially the extractivists, and that’s not in the COP,” he told IPS.

A dialogue of the deaf has prevailed between the UNFCCC and civil society, as the official summit has ignored the demands of social movements.

“They haven’t heard us. We are here to demand actions. We don’t need another COP to resolve the climate crisis, we need changes,” Tan complained.

Despite the obstacles, “we will not stop participating actively. The women’s movement is unifying. It is a slow process, because people are not used to being led by women,” Pankararu said.

IPS produced this article with the support of Iniciativa Climática of Mexico and the European Climate Foundation.

Featured image: The climate summit COP26 was accompanied by protests by social movements, with demonstrators arriving in Glasgow from all over the world and expressing themselves in their own language or dressing up as dinosaurs to symbolize their criticism. But government delegates did not listen to their demands for ambitious and fair action to contain the global warming crisis. (Credit: Laura Quiñones, UN)