SVG has ‘no geo-political axe to grind’: UN envoy

You Are Here: Home » News & Current Affairs » SVG has ‘no geo-political axe to grind’: UN envoy 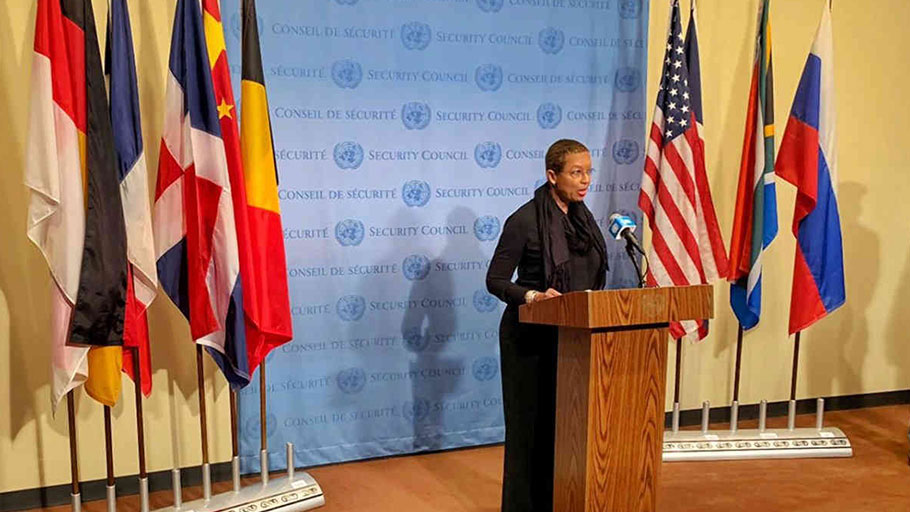 St. Vincent and the Grenadines Ambassador to the UN, I. Rhonda King addresses Flag Planting Ceremony on assumption of seat on UN Security Council.

In becoming the smallest nation ever to serve on the prestigious United Nations Security Council, St. Vincent and the Grenadines Ambassador to the UN, I. Rhonda King, says the country has “no geo-political axe to grind.”

“This day is a historic one, not only because we are the smallest nation ever to sit on the Security Council but also, perhaps, because the urgency of now calls for fresh, disinterested and impartial perspectives on the seemingly intractable problems of our day,” said Amb. King in addressing the Flag Planting Ceremony on Thursday, as St. Vincent and the Grenadines officially assumed a non-permanent seat on the UN Security Council.

“St. Vincent and the Grenadines has no geo-political axe to grind,” she declared. “We are just a young nation that yearns for a better world.”

King said that “all over the world, there is a growing disquiet,” stating that “people are rising up, many (if not most) are young, and they are calling on those with power to correct the current trajectory of our planet and our politics.

“Today, St. Vincent and the Grenadines, a Small Island Developing State – mere 40 years after reclaiming its independence from colonial powers (Great Britain) – will take up its seat for the first time as an elected member of the Security Council,” she added.

The ambassador said St. Vincent and the Grenadines comes to the task with a team “that largely comprises young, well-educated, enthusiastic and creative thinkers.”

In alluding to a quote from the country’s Prime Minister, Dr. Ralph E. Gonsalves, King said: “We, metaphorically speaking, ‘comprise the songs of Caribs (our indigenous people), the rhythm of Africa, the chords of Asia, the melody of Europe and the lyrics of the Caribbean itself.’”

“With this uniquely blended psyche, we take up our seat at the horseshoe table in the Security Council Chamber,” the diplomat said. “We go forth with the audacity and the hope of making a small contribution toward the creation of transformative, resilient, new realities.”

King thanked the Member States of United Nations General Assembly for “placing their trust in St. Vincent and the Grenadines.

“We will endeavor every day, for the next two years, to maintain that trust by discharging our duties and responsibilities with integrity, steadfast adherence to the rule of law, the values and principles enshrined in the United Nations Charter,” she said.

Earlier, the top Vincentian diplomat said that St. Vincent and the Grenadines’ “historic journey” began with “Three Stories and a Prayer: The Manifestation of the Prophetic Imagination.”

“With the audacity of David, the widow’s faith, the spirit of Chatoyer (the Carib chief and St. Vincent and the Grenadines’s lone national hero), the prayer of Saint Francis of Assisi, we begin a historic journey,” she said.

King noted that St. Vincent and the Grenadines enters the Security Council “on the cusp of its 75th anniversary and at a time when the world is riddled with challenges, and the rules-based system is increasingly under threat on many fronts.”

“As a young nation, we will be remiss if we believe the fight for our independence to be [is] a done deal,” King said. “Small states, by definition, are vulnerable in a world, where international law is compromised and only might makes right.

“This makes us natural defenders of the international order that protects us,” she added. “Indeed, it is the responsibility of a small state.”

“The Small Island Developing State cannot afford to wait,” she added. “Our independence is an ongoing project that must be protected and defended, simultaneously, on all fronts.”

King said that charting St. Vincent and the Grenadines’ course through “the multifaceted challenges endemic to globalization is buttressed” by the country’s faith, alluding to a line from the national anthem: “Our faith will see us through.”

She said St. Vincent and the Grenadines can, today, converse with the powerful, permanent five members of the Security Council.

“We can speak Russian, Mandarin, French and English, and we speak Spanish, too,” she said.

King said small St. Vincent and the Grenadines takes to “the high table (of the Security Council) the fresh perspectives of a Caribbean society which, according to George Lamming, ‘was perhaps the first global experiment in human history’.” Lamming is a renowned Barbadian novelist, essayist and poet.

“Today, this nation (St. Vincent and the Grenadines) can stand up for and with the people of Africa as an elected member of the United Nations Security Council,” King affirmed, adding that it is “a manifestation of the prophetic imagination.”

“This uniquely blended psyche makes our nation, Hairouna, the land of the blessed, ideally suited to the task up ahead,” she added. “We embody the world. We go forth to create transformative, resilient new realities by becoming more the transformed, resilient people we are destined to be.”

Jubilation ripped through the Vincentian community at home and in the Diaspora last June when St. Vincent and the Grenadines was elected as a non-permanent member of the United Nations’ Security Council.

UN General Assembly rules state that candidates running for a seat on the Security Council must win a two-thirds majority of votes to succeed, even if they are running uncontested.

“I will like specially to reach out to the people of El Salvador and its people,” Gonsalves told reporters at the UN immediately following the vote, when asked about El Salvador’s challenge to St. Vincent and the Grenadines for the non-permanent seat. “We’re about peace and security. I’m grateful to all who aided in this campaign.”

Other countries elected in the June vote in the UN General Assembly were Estonia, Niger, Tunisia and Viet Nam.

The four states, along with St. Vincent and the Grenadines, took up their seats as non-permanent members of the Security Council on January 1, 2020, replacing Cote d’Ivoire, Equatorial Guinea, Kuwait, Peru and Poland, the UN said.

Every year, it said five countries are elected to the 15-member Council (10 of whom are non-permanent) for a two-year term, according to a geographical rotation set by the General Assembly in 1963.

The UN said this is to ensure fair regional representation: five from African and Asian and Pacific States; one from Eastern Europe; two from Latin American States; and two from Western European and Other States (WEOG).

While Niger, Tunisia and Viet Nam were elected unopposed, according to the UN, two of the five seats were contested: El Salvador competed with St. Vincent and the Grenadines to represent the Latin American and Caribbean group (GRULAC); and Romania lost out to Estonia in the East European group.

Five permanent members of the Security Council are: China, France, Russian Federation, the United Kingdom and the United States.

“We’re committed to the principle of the equality of state,” Gonsalves said. “We intend to work closely with many countries of the Security Council.”