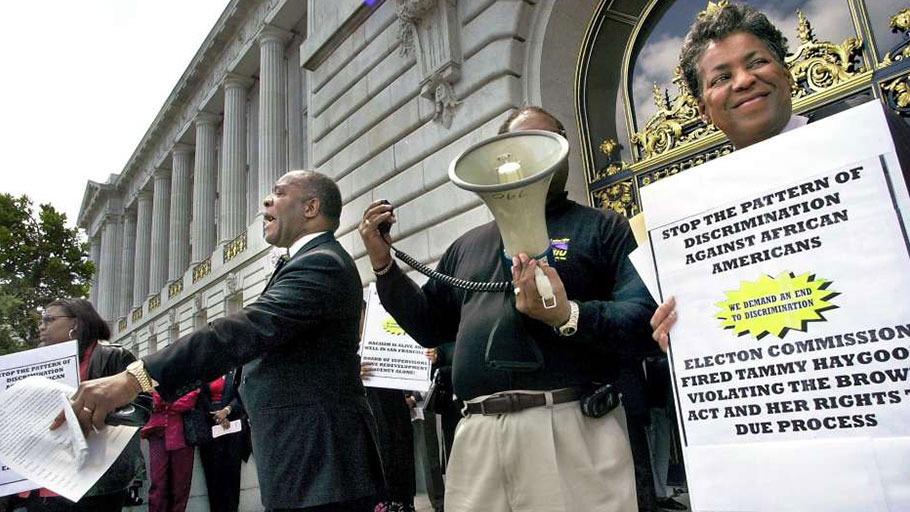 For the city’s black community, it is long past time for San Francisco to prove it’s “the city that knows how” — to prove it knows how to make amends for its historic injustices to that community. As we mark the celebration of the life and work of Dr. Martin Luther King Jr., it is time for San Francisco to establish a reparations fund that restores equal opportunity, equal rights, and dignity to African Americans living here as well as those who have been forced out of the community by injustice.

The black community here — what remains of it — continues to suffer from the fallout of the human degradation of slavery, compounded by the city’s failure to guarantee its black residents their human rights. These injustices go back to the 1850s, when blacks were denied the right to sit on juries, denied jobs, denied housing, and denied the opportunity to be full, equal members of the community.

San Francisco as we know it today would not exist without the African Americans who came here in huge numbers during World War II to toil in the defense plants and shipyards. Without them, our nation would not have won that war against fascism and tyranny. They also built a vibrant community in the Fillmore District, a business and entertainment area that was hailed as the Harlem of the West, and a vital economic engine for a booming city.

Yet, a few years after the end of the war, the city repeated its pattern of injustice. So-called “urban renewal” programs destroyed the economic heart of the black Fillmore and devastated the proud black neighborhood around it. Based not in progress but in racism, these programs were coupled with substandard public education, substandard housing, and denial of economic opportunity.

Rampant, visible discrimination continued to batter our community in the following decades, and the unchecked gentrification today continues to drive blacks out of the city they helped to build. Blacks represented 13% of the city’s population in 1970; today they account for less than 4% of its residents, even though the overall population has grown steadily for 40 years. That has had a devastating effect on black businesses, black cultural centers, black churches and every other part of the black community.

The city today is culpable. These are not past injustices, but injustices that remain unaddressed.

The results cannot be laid at the feet of former generations. They are the responsibility of the current generation.

If San Francisco wants to know how to correct this injustice, it can look to the city of Evanston, Ill., which last year created a reparations fund for its African American residents, paid for by the city’s hotel and marijuana taxes. Our city has the same revenue sources — on a far larger scale — that the Board of Supervisors should set aside to an ongoing reparations fund and dedicated to four major community initiatives.

First, we redress our failure to meet the unique needs of black children in the city’s public school system. Black students face challenges their peers do not. Not only must the educational component of their schools improve with the addition of tutoring and mentoring programs, but students also require wraparound services that address the mental health issues they face because of violence in their community.

Second, we must resolve the ongoing housing crisis that has affected the black community far more than any other. While we talk about creating affordable housing for teachers or families, we systematically ignore the fact that blacks have been forced out of their communities for decades. The existing housing lottery system fails those who remain and struggle to find adequate housing. It must be changed to prioritize the needs of those forced out and give them preference in nonprofit developments, public housing, and new affordable housing.

Third, we must redeem this promise for the San Francisco black diaspora, those thousands of residents pushed out to nearby counties beginning with urban renewal and continuing today. They are owed reparations as much as those who remain here, and San Francisco must work with those neighboring counties to direct funds to former residents to provide economic empowerment, education and other opportunities.

Fourth, we must restore the incredible black community that once existed in the Fillmore, built by African Americans and demolished by racism. The reparations fund should be directed to rebuild that community and afford African Americans the opportunity, through both private and public sector investments, to re-establish it as a thriving cultural and business hub.

As a crucial part of this restoration, the city should transfer ownership and control of the Fillmore Heritage Center to a community-based organization that would then fund and manage its operations as the cultural center and gathering place for the community. If the city could transfer the old Main Library building to the Asian American community for one dollar, as a means to preserve that community’s culture, it surely owes the black community the same opportunity on the same terms.

Finally, the city must recognize this as a moral obligation, not a chance for political opportunism. Year after year, as we remember the legacy of Dr. King, we hear the city’s leaders praise him and what he stood for. Then they stand by as the community continues to suffer the fallout of the human degradation of slavery and the treatment of their ancestors as tools, not human beings. We need action, not oratory.

The African American community has waited long enough. This year of 2020 must be the year of repentance for injustice, the return of vibrant black culture and business, and reparations to make amends and provide the means to move forward.

This city knows how.