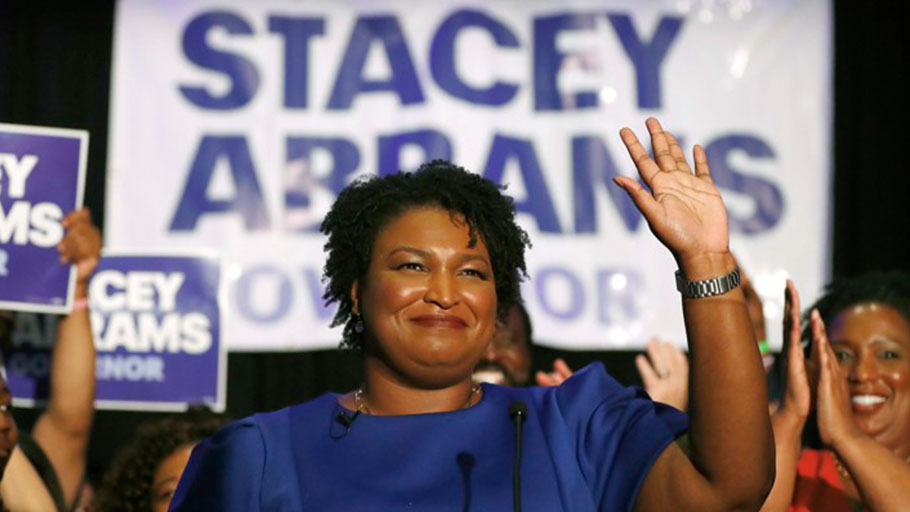 The Democrat Stacey Abrams is vying to be the first African American woman governor in U.S. history. John Bazemore, AP

The DNC’s bid to energize African American turnout this fall began with these words from Chairman Tom Perez in Atlanta: “I am sorry.”

By Russell Berman, The Atlantic —

ATLANTA—Swanky fund-raisers don’t often begin with an apology to the well-heeled donors who shelled out thousands of dollars to sip wine, eat steak, and listen to pep-rally speeches. But as he looked out over a predominantly black crowd gathered at the Georgia Aquarium on Thursday night, Tom Perez, the Democratic National Committee chairman, felt compelled to issue a mea culpa.

At first, it seemed like Perez was voicing one more generalized regret for the 2016 election that put Donald Trump in the White House—the squandered opportunity that abruptly ended the Democrats’ hold on the presidency and immediately put at risk its policy gains of the previous eight years.

Perez, however, soon made clear that his apology was much more specific. “We lost elections not only in November 2016, but we lost elections in the run-up because we stopped organizing,” he said. “We stopped talking to people.

“We took too many people for granted,” Perez continued, “and African Americans—our most loyal constituency—we all too frequently took for granted. That is a shame on us, folks, and for that I apologize. And for that I say, it will never happen again!”

Applause broke out before Perez could even finish his apology, heads nodding in acknowledgment and appreciation.

That he would choose this event, and this city, to try to make amends with black voters was significant. Thursday’s gala was the party’s first major 2018 fund-raiser to be held outside Washington, D.C., and the I Will Vote initiative it supported aims to bolster DNC efforts to register new voters; fight voter-suppression efforts in the United States; and, ultimately, turn out Democrats across the country in November.

High turnout among black voters was key to Barack Obama’s two presidential victories, and dips in participation when he was not on the ballot contributed to the Democratic wipeouts in 2010 and 2014, and to Hillary Clinton’s narrow losses in states such as Michigan, Wisconsin, and Pennsylvania in 2016. But there are signs of a revival, not only in response to Republican efforts to reverse Obama’s legacy, but also in response to efforts to erect barriers to voting that disproportionately affect African Americans. In Virginia, strong black turnout helped elect Governor Ralph Northam and the state’s second black lieutenant governor, Justin Fairfax, last November. A month later, black voters—and black women in particular—powered Doug Jones to victory over Roy Moore in Alabama’s special Senate election.

This year, nowhere will black turnout be more crucial to Democratic hopes than in Georgia, where Stacey Abrams is vying to become the first African American woman elected governor of any state. Her nomination over Stacey Evans, a white woman, in May drew a surge of national attention, and the DNC’s decision to hold Thursday’s gala alongside an African American leadership summit in Atlanta brought major party donors to Abrams’s home base.

“Welcome to Georgia,” Abrams told the DNC donors on Thursday, before adding a gentle dig of her own at the party: “It’s about time.”

“Georgia is not a red state,” she continued, setting up one of her signature campaign lines. “We’re just blue and confused.”

Abrams will find out her general-election opponent on Tuesday, when Lieutenant Governor Casey Cagle and Brian Kemp, Georgia’s secretary of state, face off in a Republican primary runoff. Cagle, endorsed by the outgoing Republican Governor Nathan Deal, had been the favorite. But Kemp has caught up to him with a campaign targeting Trump voters, sometimes in an over-the-top fashion. He ran one ad in which he points a shotgun at a fictitious teenage suitor of his daughter. In another, he notes he’s got “a big truck, in case I need to round up criminal illegals and take ‘em home myself.

“Yep, I just said that,” Kemp says in the latter spot. “If you want a politically incorrect conservative, that’s me.”

Trump rewarded Kemp with a tweeted endorsement on Wednesday, and Vice President Mike Pence is headed to Georgia on Saturday to campaign with him. To defeat either candidate, Abrams will need the support of the white Democrats and disaffected Republicans who in 2016 kept Trump to the lowest share of the statewide vote, 51 percent, for any Republican presidential candidate in 20 years. But she’ll also need supercharged turnout from black voters. That was, in part, the goal of Thursday’s event, which featured a speakers lineup of prominent black Democrats, including Senator Cory Booker of New Jersey, former Attorney General Eric Holder, and Georgia’s own Representative John Lewis.

“We have to get out and vote like we’ve never voted before,” Lewis said in an off-the-cuff address that fired up the crowd more than any of the speeches from the party’s younger stars.“If Doug Jones can win in Alabama, Stacey Abrams can win here in Georgia.”

Throughout the night, speakers paid tribute to civil-rights icons such as Lewis; Martin Luther King Jr., a son of Atlanta; and Fannie Lou Hamer. But despite the presence of two of his former Cabinet members, there was curiously little mention of Obama. His name wasn’t uttered at all until Booker, the evening’s final speaker, invoked his memory by way of a joke.

“I want to tell you the truth: I miss Obama,” said the senator and potential presidential aspirant. “And,” he quickly added to laughs, “I miss her husband, too.”

Indeed, the evening’s themes were, in some ways, an implicit critique of the first black president and the shortcomings of his tenure, beginning with Perez’s apology to the very voters who twice put him in office. Obama has long faced criticism that, under his leadership, Democrats neglected voter mobilization and were unable to extend the president’s personal brand to candidates up and down the ballot. The party lost the House and Senate, governors’ races, and hundreds of state legislative seats during his two terms.

Representative Cedric Richmond of Louisiana, the chairman of the Congressional Black Caucus, chided Democratic politicians for not talking to black voters “in a language they can understand.”

“We can’t talk to them in these Ivy League terms,” Richmond added. He went on to rib the Yale-educated Booker, but he could also have been referring to the often high-minded, Harvard-educated former president.

Booker, possibly testing out a stump speech for his own White House run, listed an array of problems facing the country, from economic inequality to mass incarceration. “Everything I mention,” he said pointedly, “was going on before Donald Trump got elected.”

A year and a half after Obama left office, the Democratic Party seems finally to be moving on from his presidency. Gone were the tributes to his legacy so common in 2016 and the first months of the Trump presidency, along with ritual campaign-trail exhortations to “build on” the progress he had made. For the DNC, and for the party more broadly, Thursday’s event was aimed at promoting a new generation of black leaders—Abrams and Atlanta’s new mayor, Keisha Lance Bottoms, in Georgia and, perhaps, Booker on a national level. From the underappreciated black electorate—first with an apology and then with a rallying cry—Democrats hope they can earn a fresh start.