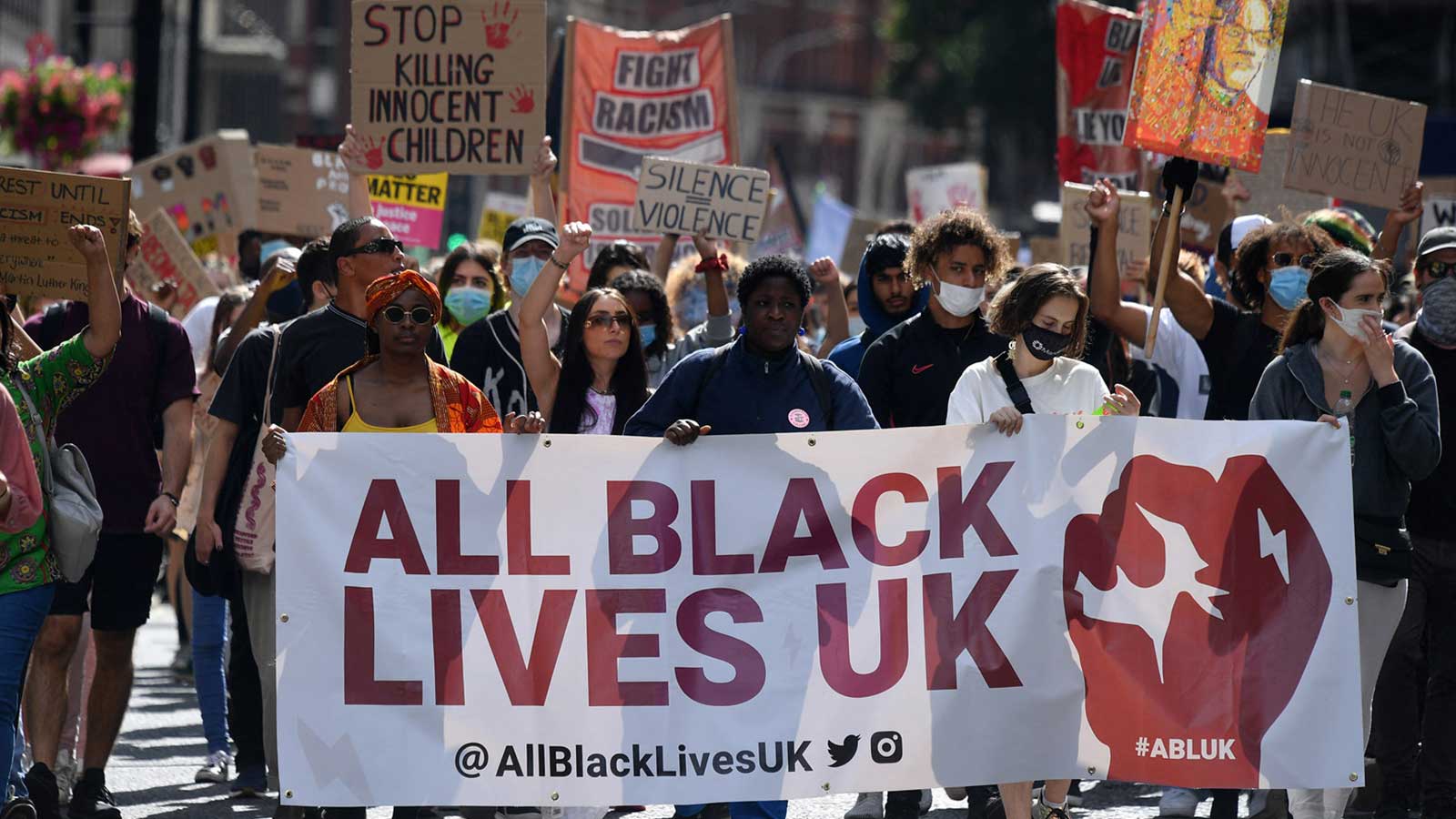 The global impact of George Floyd: How Black Lives Matter protests shaped movements around the world

George Floyd’s murder in Minneapolis in May 2020 sparked the largest racial justice protests in the United States since the Civil Rights Movement. But the movement went far beyond this nation’s borders — it inspired a global reckoning with racism.

This time last year, countries across the globe had some of the largest Black Lives Matter protests in their history, all inspired by the video of Floyd brutal death in police custody on May 25, 2020. Crossing continents and cultures, Black activists saw Floyd’s death as a symbol of the intolerance and injustice they face at home.

Some of these countries had their own George Floyd — a Black person whose death by police brutality or racial violence created national outrage. Everywhere, activists knew there was no going back to the way things were before they witnessed Floyd’s final moments.

President Biden said that when he met with Floyd’s young daughter Gianna, she told him, “Daddy changed the world.” These worldwide protests show how right she was.

The United Kingdom had the largest Black Lives Matter protests in the world last summer outside of the United States. Even before George Floyd, protesters were already galvanized by a death in their own country.

Belly Mujinga, a Black transport worker in London, died from COVID-19 in April 2020 after saying that a White man spit on her in a racist attack at work. Coworkers said Mujinga had complained before the incident about not having proper protection while working during the pandemic.

Police closed the case, citing a lack of evidence, which mobilized a first wave of protests. Floyd’s death fueled this into a larger movement confronting the country’s historical and systemic racism.

But the time to be polite was over.

Protesters and police clashed at some of the demonstrations. Some protesters tore down and vandalized statues of slave traders and political leaders — even some who were considered national heroes. A statue of Winston Churchill in London’s Parliament Square was spray-painted with a message calling him a “racist.”

Within days, London’s protests exploded from about 20 people outside the U.S. embassy to more than 20,000 people flooding the streets. Celebrities joined, including Madonna and John Boyega, who gave an impassioned address to protesters.

Months after the protests, the government commissioned a report examining institutional racism in the U.K. But its release in March 2021 stunned activists because it simply rejected their claims of systemic problems.

“Put simply we no longer see a Britain where the system is deliberately rigged against ethnic minorities,” the report from the Commission on Race and Ethnic Disparities said.

“Too often ‘racism’ is the catch-all explanation, and can be simply implicitly accepted rather than explicitly examined.”

That same month, Parliament introduced a bill that would give police greater power to restrict protests. Ironically, it inspired a new round of protests with the rallying cry “Kill The Bill,” that also called attention to the problem of violence against women.

“We have taken one step forward and about five steps back since the BLM movement in the U.K.,” Ayton said.

“Seeing Black and White people galvanized, standing against racism, scared the living daylights out of the government, out of the Metropolitan Police, out of a lot of people. I think it’s purely due to the fact that there was a huge shift in power in that moment.”

THE GLOBAL IMPACT OF GEORGE FLOYD: This time last year, the United Kingdom saw the largest #BlackLivesMatter protests in the world outside of the U.S. Activists say England has more covert racism than the United States — but they are still fighting many of the same issues. pic.twitter.com/w7HLvl4Caf

New Zealand has a global reputation for peace and tolerance. But Black Lives Matter protesters there say that comes from a reluctance to speak directly about race and discrimination. George Floyd finally started those conversations.

“New Zealand’s probably one of the most difficult places to be Black in this world,” Guled Mire, an organizer for the protesters in the capital city, Wellington, told CBS News. “Imagine you are Black, but you’re not allowed to be Black. That’s literally how it is over there.”

Protests coincided with New Zealand conducting a trial run of arming its police officers — something not routinely done there. The experiment was a response to the 2019 mass shootings at two mosques in Christchurch, which were committed by a white supremacist. But Black and Indigenous populations worried that armed police would only put them in danger.

“We addressed the prime minister directly and the government and we said, ‘We’re not gonna stand for this, and we oppose this,'” said Mazou Q, a rapper who helped organize protests in Auckland. “Because we don’t want to end up like the United States.”

The government announced days after the first protests that it would scrap plans to arm police, though it did not credit the protests for influencing that decision.

People of African descent compromise less than 1% of New Zealand’s population. But the protests brought Black protesters together with Indigenous Māori and Pacific Islanders, creating a movement for racial progress unlike anything the country had seen for years. One protest in Wellington drew more than 20,000 people.

“The kind of escapism that we indulged in in the past wouldn’t suffice anymore,” Mazbou Q said. “We had to reckon with what was happening, and we had to take a side…There was no more status quo as an option.”

New Zealand has a global reputation for peace and tolerance. But George Floyd’s death last summer moved Black activists to speak up about problems they say the country is “in complete denial” about. pic.twitter.com/cqsQHDEwXB

In France, protesters rallied against their nation’s own history of racial injustice and police brutality, which has very different roots from the U.S.

In 1960, 17 sub-Saharan African nations, including 14 former French colonies, gained independence from their former European colonists. Today, many of the Black people living in France emigrated from those colonies.

With an eye on the United States, children of immigrants from Africa and the Caribbean are bringing race into the French public discourse.

“There is this refusal to take into account the history of slavery and colonization, and how race was part of it and how we’re still dealing with the legacy,” said Nathalie Etoke, an associate professor of Francophone and Africana Studies at the City University of New York Graduate Center.

The thousands of protesters in Paris were joined by the family of Adama Traore, who died on his 24th birthday in 2016 under circumstances similar to Floyd. Three police officers put their weight on him to restrain him, and he could not be revived after being brought to a police station. There were no charges for his death.

“We’re demanding acts of justice, not discussions,” Adama’s sister Assa Traore said in a press conference last June, as protests continued into their second week. “We’ll protest in the streets every week if necessary.”

George Floyd was killed in Minneapolis. But thousands of miles away in France, his death sparked unprecedented protests against anti-Black violence – the roots of which are far different than the United States, but the experience of which is all too familiar. pic.twitter.com/qn6cnSwvQr

In Colombia, the news of Floyd’s death was bookended by two notorious police killings domestically.

On May 22, 2020 — just three days before Floyd’s killing — a young Black man named Anderson Arboleda was beaten to death by police for allegedly violating coronavirus curfew restrictions. Protesters soon marched to the U.S. embassy in Bogota, moved by the deaths of both Arboleda and Floyd.

Then on September 9, 46-year-old Javier Ordóñez died after being brutalized in police custody — which was caught on video. In the footage, Ordóñez is heard saying “I am choking” and “Enough, no more, please” as officers kneel on him and use stun guns on him.

The deaths set off months of protests, some of which ended in violent and even deadly police crackdowns. During recent protests in Colombia over inequality and police brutality, local activist groups say at least 43 people have been killed by police. More than 2,900 cases of police brutality have also been reported.

Activists say the cases of Floyd and Ordóñez inspired people to record incidents with police. And protesters say that even the threat of death isn’t stopping them from continuing to challenge police violence and systemic brutality.

“A lot of people tell me, ‘Yolanda, don’t risk your life by marching in the streets knowing it can put you at risk,'” said Yolanda Perea, a human rights defender in Chocó. “But I’ll continue to march and defend our lives. Because if we don’t unite to defend life, they will continue to crush us more every day.”

In Colombia, where police brutality has notoriously been a problem, George Floyd’s death added fuel to the fire, sparking #BlackLivesMatter protests and inspiring citizens to film confrontations with police. pic.twitter.com/NrElZrlfvu

As the summer of protests blazed through the U.S., Washington, D.C. became a national center for the Black Lives Matter movement. The city created Black Lives Matter Plaza, near the White House, less than two weeks after Floyd’s death, and it is now a regular gathering space for protest and activism.

Washington was also the site of the nation’s most notorious crackdown on protesters. On June 1, law enforcement used tear gas and riot control tactics to push peaceful protesters from Lafayette Square so that then-President Trump could cross the cleared-out street and pose in front of the vandalized St. John’s Church, holding a Bible.

The photo-op and use of force drew condemnation from military officials and even some of Mr. Trump’s supporters, who believed it crossed a line.

On August 28, thousands gathered for the 2020 March on Washington at the Lincoln Memorial, with George Floyd’s brother Philonise addressing the crowd.

Meanwhile, the local Black Lives Matter chapter started mutual aid initiatives in all eight wards of the city to work to bring about some of the changes that they’ve yet to see from institutions.

“We have built a stronger community and reimagined a world where we keep us safe and we can build a world without police,” Neenee Taylor, the former mass engagement and rapid response coordinator for Black Lives Matter D.C., told CBS News. “And so that’s what has changed for our community since George Floyd in D.C. But as far as the government — hasn’t nothing changed.”

Last summer, in the aftermath of George Floyd’s death, Washington D.C. became a focal point for the country’s #BlackLivesMatter protests – inspiring a new, younger generation of activists in the process. pic.twitter.com/ZORecd3DcY

Featured Image: Protesters march through London towards Parliament Square in support of the Black Lives Matter movement on July 5, 2020, in the aftermath of the death of George Floyd in police custody in the U.S. Credit: Justin Tallis, AFP via Getty Images