The Movement for Black Lives Steps into the Electoral Arena

You Are Here: Home » Blog » News & Current Affairs » The Movement for Black Lives Steps into the Electoral Arena 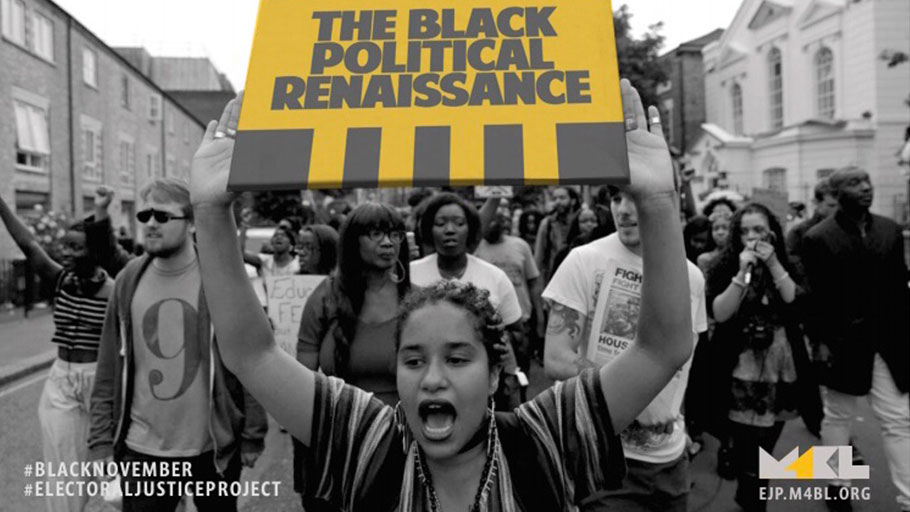 In 2017, the Movement for Black Lives launched its Electoral Justice Project (EJP). The EJP is building a strategic political home with organizers from more than 50 Black Organizations around the country that are winning Black civic power and seeking transformative political change. Just this year, they launched the Electoral Justice League, a cohort of Black campaign managers that will develop the expertise to win campaigns where they live. In this interview, experienced electoral organizer Jessica Byrd from the M4BL Electoral Justice Table talks with Organizing Upgrade editor Rishi Awatramani about the EJP strategy for electoral engagement, the need for an independent political organization, and the centering of Black communities in civic engagement work.

What is the Electoral Justice Project, and what is the strategy that it’s pursuing in this period? What does EJP hope to accomplish in terms of electoral impact and building power?

The Electoral Justice Project is a project of the Movement for Black Lives. It’s driven by Black-led organizations across US that are engaged in radical political work. We’re in deep connection with each other to engage in shared strategies around radical Black politics. Our main strategies in the short-term include creating a ‘help desk’ where we offer confidential and loving advice on electoral work to Black-led organizations around the country, and the Electoral Justice League which is working directly with 12 Black campaign managers to support their engagement in this 2018 election cycle. Our approach is to engage in electoral tactics while guided by a framework and commitment to Black Liberation.

The day after election day, we want to have mobilized thousands of voters through organizations that link their work directly to the Movement for Black Lives. As a part of that, we want to see, through our voter work, how our framing of the problems confronting our people impacts the way voters think about these issues.

An ongoing question for us is, can we transform a part of the protest energy that built up the Movement for Black Lives into concrete electoral strategies? It’s definitely hard, but totally possible.

How will the EJP be using the 2018 and 2020 elections to accomplish your broader goals? What are your markers of success?

First, we’re all going to continue engaging in deep structural change work wherever we can. That means challenging the two-party system, money controlling politics, disenfranchisement of currently and formerly incarcerated folks, and other structures that don’t work for us or for anyone, but especially for Black voters. Second, we’re working at keeping people alive. That means electing candidates with radical policy visions. We view electoral work as also being about reducing harm to Black people. Third, we’re building Black progressive infrastructure and an independent political ecosystem.  We know we’re not going to get every voter on our side and that’s ok, but we believe that most voters are actually progressive, and so we believe that we can mobilize voters on a fundamentally progressive platform.

What lessons from past rounds of Black-led progressive electoral fights are you and EJP drawing into your strategic thinking?

The most successful moments in Black political history have all been people-powered and people-centered. They’ve happened when Black people are able to organize their friends and neighbors and to build on the strength of the relationships in their lives. M4BL does this very well. We do it by linking the immediate issues and crises that pop up in the communities we’re based in to a broader analysis of the conditions affecting Black people around the country. And we do it where we organize by pushing lawmakers and people in power for change now, not on the timeline that works for them.

We also draw on lessons from our experiences in the electoral arena, where it’s easy for people to invest in the wrong tactics because of misconceptions many organizers have that we can win through TV ads and other high-profile tactics alone. The EJP is trying to reorient our folks and to focus our work with groups building with people based in real communities.

M4BL has embraced a wide-range of tactics to achieve its goals, from protest to organizing, communications, and electoral engagement. How does the M4BL EJP view electoral politics within your broader social change objectives? How do you engage with the argument made in many movements that we should abstain from electoral engagement because it’s a lost cause?

People are correct and righteous about the failures of electoral work to deliver the goods to our communities. That perspective comes from real experience. But we argue that electoral strategies are just one tool in our tool belt. And we argue that we have to engage here because there’s a lot at stake in this work. So, our job is less about convincing people that this is a righteous place for us to work, but we say that it’s a place we absolutely have to engage.

In the past decade, and especially after 2016, many new electoral efforts have emerged amongst progressives and leftists. How does the EJP view this landscape,  and who are the forces you think M4BL and the EJP need to be in closest alignment with moving forward?

For the M4BL, we’re focused first on other Black independent political organizations that share our vision from our policy framework. Black people have often been the mules of other people’s political dreams. We’re trying to build the EJP to prepare Black people to contend for power in a long-term way. Along the way, multi-racial solidarity will be important with other communities. We can use intersectional moments to engage in public policy that allows us to develop genuine solidarity based on an attempt to understand the issues facing other communities.

You have a lot of personal experience working directly with the Democratic Party. Many groups are extremely concerned about cooptation or demobilization of our movements by the Democrats if we work inside that Party, while others are concerned about the structural challenges of building Independent political power because of the resilience of the Democrats and two-party system. How does EJP think about the pitfalls of engagement and non-engagement with the Dems?

I was trained in and got a lot of my formative experience in Democratic campaigns. I am clear that the job of the Democratic party is to protect incumbents already serving and gain ground over Republicans by flipping seats to blue. That is not a binary that has been transformational for Black people and public policy that positively affects our lives. While the Democratic party does its job this cycle, the Movement for Black Lives intends to do its job which is to engage in a multi-tactical fight for the health, joy and prosperity of all Black people. Anyone who gets in the way of that will be held accountable.

The phrase ‘Inside/Outside’ has been adopted as a strategic orientation by groups arguing for building independent power outside of the Democrats while also working inside that party to shift it to the left. Since 2016, there has been a renewed struggle for power inside the Dems, in part waged by progressives and leftists organized or motivated by the Sanders campaign. Do you or the EJP view this as an important struggle, and is there a role for M4BL in this struggle?

I don’t need to convince Dems or the White left to care about intersectional issues and Black lives. I’m focused on deep Black organizing and electing Black leaders. I understand why people ask that question, but I want to build power for Black people which takes intention and deep work. We will be organizing our friends and neighbors, but we’re not going to beg national organizations and formations to care about Black people. In 2020, if a Democrat is elected, this resistance movement will dissipate, while, for Black and Brown communities, many of the same struggles will continue. So building independent political power is a priority. If we can keep building power and connected strategy, then I know that we can win. And we’ll see you at the finish line.

Jessica Byrd is the Founder and Chief Doer of the Three Point squad. She founded Three Point Strategies in 2015 to provide a home for electoral strategy that centers racial justice and is transformational rather than transactional. Jessica has worked on campaigns in 43 states and you can find her at the side of the most exciting races to elect Black women in the country, training hundreds of leaders, and building tools to serve the Movement. In 2016, Jessica was named the January Woman to Watch by Essence Magazine, “12 New Faces of Black Leadership” by Time Magazine, and Rolling Stone named her one of the most influential millennials shaping the 2016 election.

Now in graduate school at Johns Hopkins, Rishi Awatramani brings a wealth of on-the-ground organizing experience to Organizing Upgrade. He was the Lead Organizer and Communications Director at Virginia New Majority from 2009 until last year. He previously worked as Leadership Development Director at Just Cause Oakland and as a union organizer for homecare providers and low-income women of color with both SEIU Local 1199 in New York and SEIU Local 715 in San Jose. Rishi has also worked with social movements in India and South Africa.

Why are so many of San Francisco’s black mothers and babies dying?

Why are so many of San Francisco’s black mothers and babies dying?
We Need Your Support — Donate, Share, Sign-Up Ways to Support