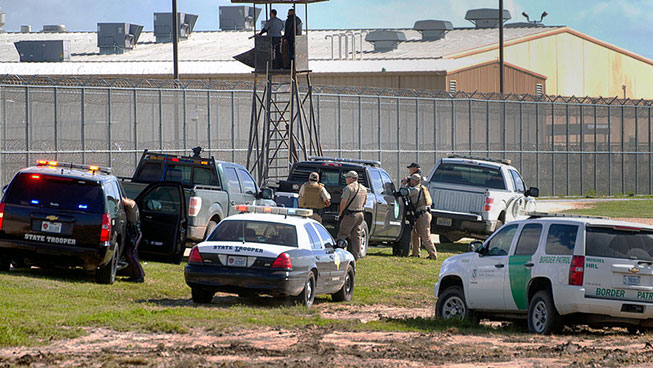 This Notorious Private Prison May Soon Reopen Under Trump

It was once known as Ritmo — the Gitmo of Raymondville, Texas.

The notorious private prison, sometimes compared to the U.S. detention facility at Guantanamo Bay but officially named the Willacy County Correctional Center, was forced to close in 2015 after hundreds of inmates rioted over grim conditions, inadequate medical care, and overcrowding.

But now, thanks to President Donald Trump’s ongoing crackdown on immigration, Ritmo is set to reopen. County officials say they’re scheduled to meet Tuesday evening to review competing offers from two private prison contractors who want to refurbish the damaged facility and turn it into an immigrant detention center.

“We’ll see who gives the best deal, and whoever does, we’ll go with that company,” said Willacy County Commissioner Eliberto Guerra. “There’s a lot of options on the table.”

Guerra said the county has been in talks with both Management and Training Corporation (MTC), the Utah-based private prison contractor that first opened the Willacy County facility in 2006, and the GEO Group, America’s second-largest private prison operator.

MTC spokesperson Issa Arnita declined to comment, saying it was “premature to talk specifics.” GEO Group spokesperson Pablo Paez denied that the company is in “negotiations/discussions to either purchase the center, reopen it, or operate it.”

Guerra said the potential reopening of the prison was made possible by Trump’s Jan. 25 executive order on immigration, which authorized the department to “allocate all legally available resources” to “establish contracts to construct, operate, or control facilities to detain aliens at or near the land border with Mexico.” Raymondville is located about 50 miles north of Brownsville, which sits on the border in the southernmost corner of Texas.

Stock in private prison companies has soared since Trump’s election, with investors expecting the new administration to significantly ramp up detention of unauthorized immigrants. The U.S. already keeps at least 34,000 immigrants locked up on any given day, relying heavily on the private prison industry for space. The Justice Department announced near the end of President Barack Obama’s tenure that it would phase out the use of private prisons due to concerns about security and cost effectiveness. The Trump administration almost immediately reversed the move.

Private prisons have repeatedly been criticized for mistreating inmates and profiting from mass incarceration, and the Willacy County facility was often singled out as the worst of the worst. A 2014 ACLU report called it “a physical symbol of everything that is wrong with enriching the private prison industry and criminalizing immigration.”

Before the riot, Willacy had space for more than 3,000 inmates, most of them housed outdoors in huge dome-shaped tents made of Kevlar. The ACLU interviewed multiple inmates who complained about “vermin, unsanitary bathrooms, deprivation of natural light, and spoiled and inedible food.”

During the riot, which occurred on Feb. 3, 2015, inmates used shaving razors to cut through the walls of the tents, then proceeded to ransack the prison and set several fires. It took nearly two days for authorities to get the situation under control, at which point the prison was virtually uninhabitable. The Bureau of Prisons cancelled its $532 million contract with MTC and transferred the prisoners — mostly low-level “criminal alien” offenders facing deportation — to other facilities across the country. Guerra said that aside from some basic cleanup, the prison has sat empty and in ruins ever since.

Willacy County, which received about $2.5 million in annual revenue from the prison, was forced to slash its budget by a third. The county sued MTC, alleging that “abysmal mismanagement” and “deplorable” conditions led to the riot; that lawsuit is still pending. Guerra declined to comment on reports that the county would drop or settle the suit if MTC agrees to reopen the prison.

Carl Takei, a staff attorney at the ACLU’s National Prison Project, called the possibility that Willacy County would again partner with MTC despite the lawsuit and riot “the definition of turning a blind eye to abuse.”

“They know exactly what they’re getting into,” he said. “And if they were ever sued themselves for deliberate indifference to constitutional violations, that would be part of the evidence.”

Takei also noted that several studies show that private prisons have a negative long-term economic impact on communities, and he warned that the government could once again choose to cancel MTC’s contract if the company fails to address the issues that plagued the prison in previous years.

Guerra, however, said county officials were focused on the immediate boost that reopening the prison would provide to the local economy.

“The most important thing is jobs for the people in the county,” he said. “That’s what everybody is looking at, the jobs that were lost two years ago.”