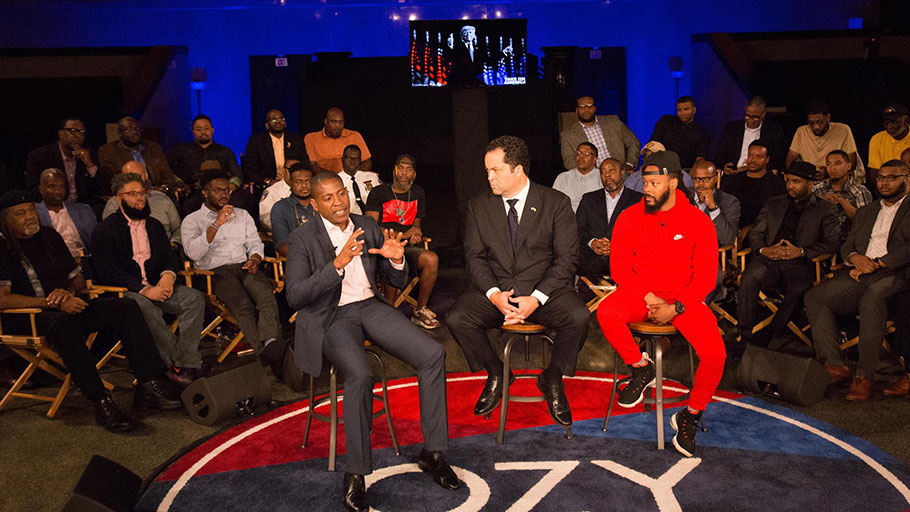 The conversation is happening. Will you be a part of it?

What happens when you get a room of 100 Black men from Baltimore discussing new Supreme Court Justice Brett Kavanaugh? Or Colin Kaepernick and policing? What about President Donald Trump and the economy?

You get the first episode of Take On America With OZY, taped at the War Memorial in Charm City with the midterm elections right around the corner. Unlike most town halls, this wasn’t about politicians answering questions from a cherry-picked crowd. The spotlight wasn’t on the celebrity guests but the people: civic leaders, businessmen, activists, students, educators and everyone in between. Before a televised audience, they tackled stereotypes and assumptions head-on. And they had plenty to say.

“You’re dealing with a white supremacy agenda,” Duane “Shorty” Davis, a longtime Baltimore activist and Black Republican, said of Kavanaugh. Yet others backed the controversial justice. “What happened to due process?” asked Derrick Hollie, president of the conservative group Reaching America. “We’re in a room full of Black men. What if we were accused and didn’t have a chance to prove ourselves?” Horace Cooper, a fellow at the National Center for Public Research, defended the presumption of innocence: “Fifty or 60 years ago, any one of the men here, all it would have taken was the accusation. You might not have even gotten to trial.”

We blame our fathers for the system murdering us. We’ve got to start blaming the system for the oppression it puts on us.
— J.C. Faulk, Diversity and Inclusion Consultant

Should Kaepernick be considered a hero? Columnist for The Atlantic and former ESPN anchor Jemele Hill — part of a star-studded panel including activist DeRay Mckesson, Maryland governor candidate Ben Jealous, actor Lawrence Gilliard Jr. and Senate candidate Tony Campbell, among others — said yes, the former 49ers quarterback is heroic. “The NFL, which has no problem welcoming in people who have been accused or convicted of domestic violence or sexual assault, have decided to blackball somebody from the league who stood up for justice,” Hill said.

“I will not uplift Kaepernick on a higher level than any other Black person who has been talking about this same issue for decades,” said 26-year-old poet Duke Porter, who nonetheless thanked Kaepernick for his protests. One audience member suggested hero worship is dangerous. Another believed Kaepernick’s Nike deal was a cynical profit play. “I’m going to call him a hero because they call White guys heroes for lesser things,” snapped back J.C. Faulk, a diversity and inclusion consultant. “I don’t care if somebody gets on their knee or stands on their head, the system that oppresses us has no right to tell us how to fight for our freedom.”

McKesson, a leader in the Black Lives Matter movement, noted how laws protect officers from prosecution, from California to Ohio. In Maryland, one statute says you can file an anonymous complaint for an officer for everything except brutality. The Baltimore police department’s chief spokesman, T.J. Smith, a Black man whose brother was shot and killed last year, said police agree they should be held to a higher standard. “Police leaders are more aware of that today than they were before,” Smith said. 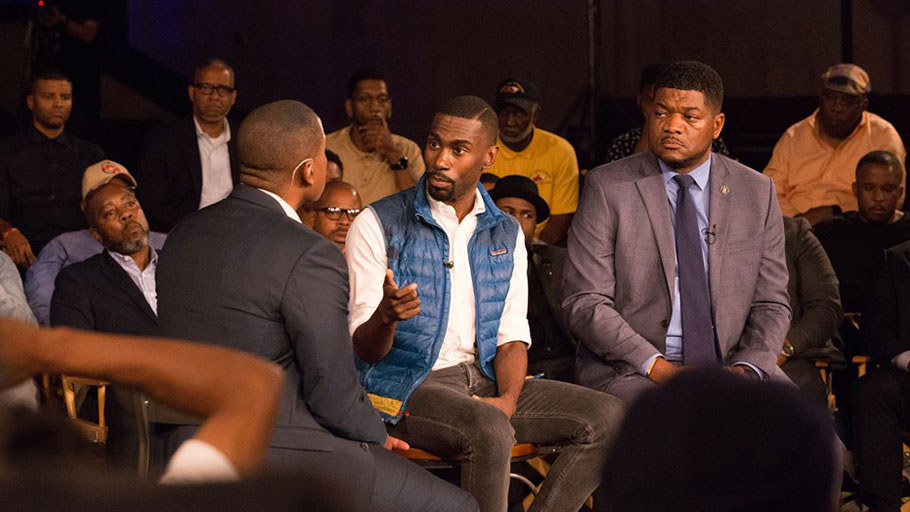 “When a 10-year-old is shot and killed in the city, very little changes,” said James Evans, a local ad executive. “When an officer is shot in the city, neighborhoods are closed down; there are 10-mile-long processions. That’s the implicit bias.”

When fatherhood came up, emotions rose. Gilliard Jr., known for roles in The Wire and The Walking Dead, spoke about growing up with a Vietnam veteran father who was addicted to drugs. “I try my best to not be my dad,” he said. Hill also spoke of her father’s heroin addiction and how, although he reformed his life, “once you create that distance, it’s there.” The diversity consultant, Faulk, is a single parent whose dad died at 31 from liver problems caused by alcohol abuse. He said he learned to channel his anger to another culprit. “We blame our fathers for the system murdering us. We’ve got to start blaming the system for the oppression it puts on us,” he said.

The day after the Baltimore event, Smith resigned as chief spokesman for the Baltimore police, a department in shambles with three chiefs this year alone — and a fourth coming after the interim chief announced he wouldn’t seek the full-time post. Although Smith said he made the decision beforehand, he appreciated how Take On America brought together the community. “It’s a good, noteworthy conversation to have,” he said.

Ties between African countries and China are complex. Understanding this matters

Ties between African countries and China are complex. Understanding this matters
We Need Your Support — Donate, Share, Sign-Up Ways to Support