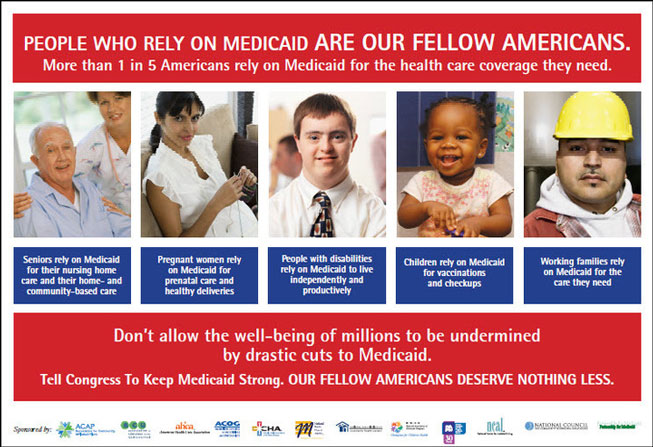 Why The GOP Really Hates Medicaid

President Trump made news again when he abruptly switched gears and said that he wouldn’t keep hands off Medicaid as he kind of, sort of promised to do during the campaign. Now, says Trump, it’s fair game for a quick assault, namely, the part of the program that some governors, including GOP governors, used to expand coverage in their states. This was made possible under a provision of the Affordable Care Act. Trump ignored the warning that by attacking Medicaid it could screw up the time table for the GOP congressional assault on Obamacare.

This is incidental to the real reason Trump broke his promise and why the GOP’s manic obsession with savaging Medicaid. The GOP’s stock arguments that reining in Medicaid is about cutting costs, federal intrusion in health care, and restoring health care to the states is hogwash. It’s the program itself, who it benefits, and what it means politically to the GOP.

The root of the GOP attack and loathing of Medicaid starts with who created it and what it was created to do. It was a Lyndon Johnson era, Democratic Great Society, War on Poverty Program, that was unabashedly aimed at covering welfare recipients, and the poorest of the poor. Though the outrageous, and very serviceable, myth that is still happily fanned by conservatives, and many in the media, that Medicaid is a gigantic taxpayer health care give-away to the black poor, the majority of Medicaid recipients have always been whites. In time, Medicaid was tweaked, reconfigured, and expanded to provide health care for millions more who had absolutely no access to affordable, if any, health care coverage. The greatest beneficiaries, though, remained the poor, and especially their children. Medicaid cover the cost of prenatal care and hospitalization.

Medicaid has been wildly successful in controlling health care costs, providing the poor and working families with coverage unobtainable in the private insurance market, and in providing a brake on run-away medical care cost coverage in the states. Conservatives have seen deep political peril in this. And they saw even deeper peril when Obamacare expanded coverage even more and bumped the numbers of those now receiving health care coverage under the program to nearly 20 million persons. When conservative GOP governors such Ohio’s John Kasich publicly took the expanded coverage deal with Medicaid, and publicly said it was a boon to the state, the die was cast; Medicaid had to be assailed. The political horror to the GOP is that as long as Medicaid is seen as a Democratic measure, and more specifically an Obama measure, to aid the needy, the possibility is real that many of those millions of voters in crucial swing states such as Ohio, will began to connect the dots. The dots being that Medicaid is a health care program that helps families in need, the Democrats support it and fight for it, while GOP conservatives bitterly oppose it. Therefore, come election time, those families might, just might, cast a vote for the friends, not the enemies, of Medicaid.

This is an especially fragile political proposition for the GOP given that Trump won by only the barest margin in a handful of states, nearly all of Congress is up for re-election in 2018, and GOP governors and legislatures have only tenuous control in several states. Medicaid, and the lies and stereotypes told about it, appear to be a tailor-made issue to rally conservatives, and hopefully keep the GOP political ducks in contested states in line. That’s only the start, since Medicaid, because of those lies and stereotypes, is regarded as the easiest of pickings to go after, if successful, then it opens the gate wide to the next two perennial right-wing targets, Social Security and Medicare.

As with Medicaid, Trump claimed during the campaign that he wouldn’t touch Social Security and Medicare, but that almost certainly will go the way of his Medicaid hands-off promise. The two programs are, and have always been seen, as Democratic inspired and backed programs, and that has made them conservative whipping boys with the usual storehouse of lies about run-away costs, waste, and heavy handed federal intrusion.

Medicaid then is the proving ground to convince the millions that benefit from these foundational federal programs, they aren’t really in their best interests. The GOP will try to pound home that there are better alternatives, and the GOP, not the Democrats, is the party that can provide those alternatives. Trump got that message and will take the point in trying to deliver it to those voters who have grave doubts about hacking away programs that have been life-savers to them. For tens of millions, Medicaid has been at the top of that list of those life-saving programs. This is what makes it the enduring political target it is, or put bluntly why the GOP hates it.

Earl Ofari Hutchinson is an author and political analyst. He is the author of In Scalia’s Shadow: The Trump Supreme Court ( Amazon Kindle). He is an associate editor of New America Media. He is a weekly co-host of the Al Sharpton Show on Radio One. He is the host of the weekly Hutchinson Report on KPFK 90.7 FM Los Angeles and the Pacifica Network.