The House Judiciary Subcommittee on the Constitution, Civil Rights, and Civil Liberties held a hearing on H.R. 40, the Commission to Study and Develop Reparation Proposals for African-Americans Act, on February 17, 2021. The 10:00 a.m. ET hearing examined the legacy of slavery, its continuing impact on the Black community, and the path to reparative justice.

Witnesses slated to testify at the hearing included:

If passed, H.R. 40 would establish an expert federal commission to study the legacy of slavery in the United States and its ongoing harm and develop proposals for redress and repair, including reparations.

The announcement of the hearing comes after more than 300 organizations, businesses, faith leaders, and city leaders – including Human Rights Watch, the American Civil Liberties Union, the National African American Reparations Commission, N’Cobra, Color of Change, the Leadership Conference on Civil and Human Rights, and Amnesty International USA– sent Speaker Nancy Pelosi and House leadership a letter urging immediate congressional action on H.R. 40, as part of the We Can’t Wait project. Following the protests over the killing of George Floyd and other Black people at the hands of police, the bill garnered a record number of cosponsors.

“The historic racial and gendered injustices of slavery and its legacy, fueling the persistence of racial inequality today, remain largely accounted for,” said Heath. “The US must finally reckon with its long history of racial terror, indifference, and segregationist public policies that have created lasting harms within the Black community. That reckoning begins with H.R. 40.” 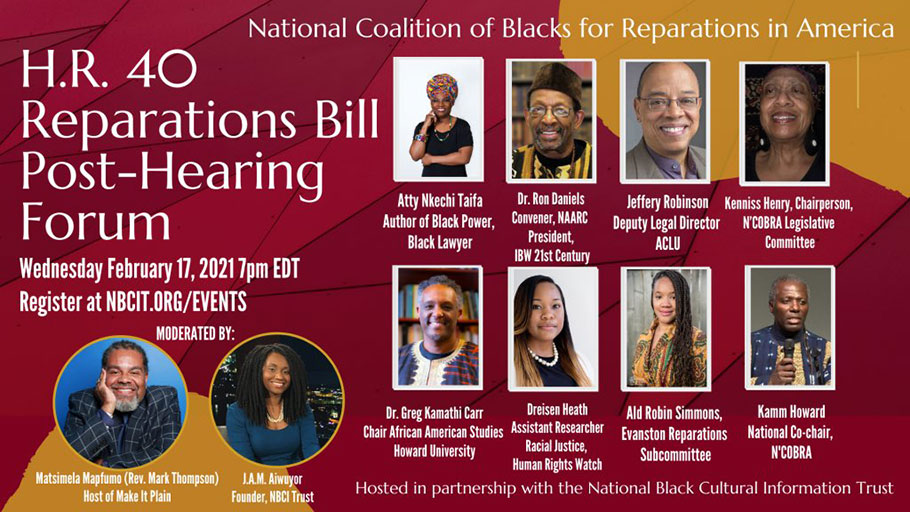 The House Committee on the Judiciary, Subcommittee on the Constitution, Civil Rights, and Civil Liberties held a hearing on “H.R. 40: Exploring the Path to Reparative Justice in America” on Wednesday February 17, 2021 at 10 am EDT. Following the hearing, the National Coalition of Blacks for Reparations in America (N’COBRA) and the National Black Cultural Information Trust (NBCI Trust) co-hosted the H.R. 40 Reparations Bill Post-Hearing Forum February 17th, 7 pm EDT. Watch/listen as reparationists, activists, scholars, and organizers discuss the H.R. 40 Bill and answer questions concerning the movement for reparations and how we move forward.

To My Fellow Reparations Advocates: Don’t Forget the Root Cause

To My Fellow Reparations Advocates: Don’t Forget the Root Cause
We Need Your Support — Donate, Share, Sign-Up Ways to Support