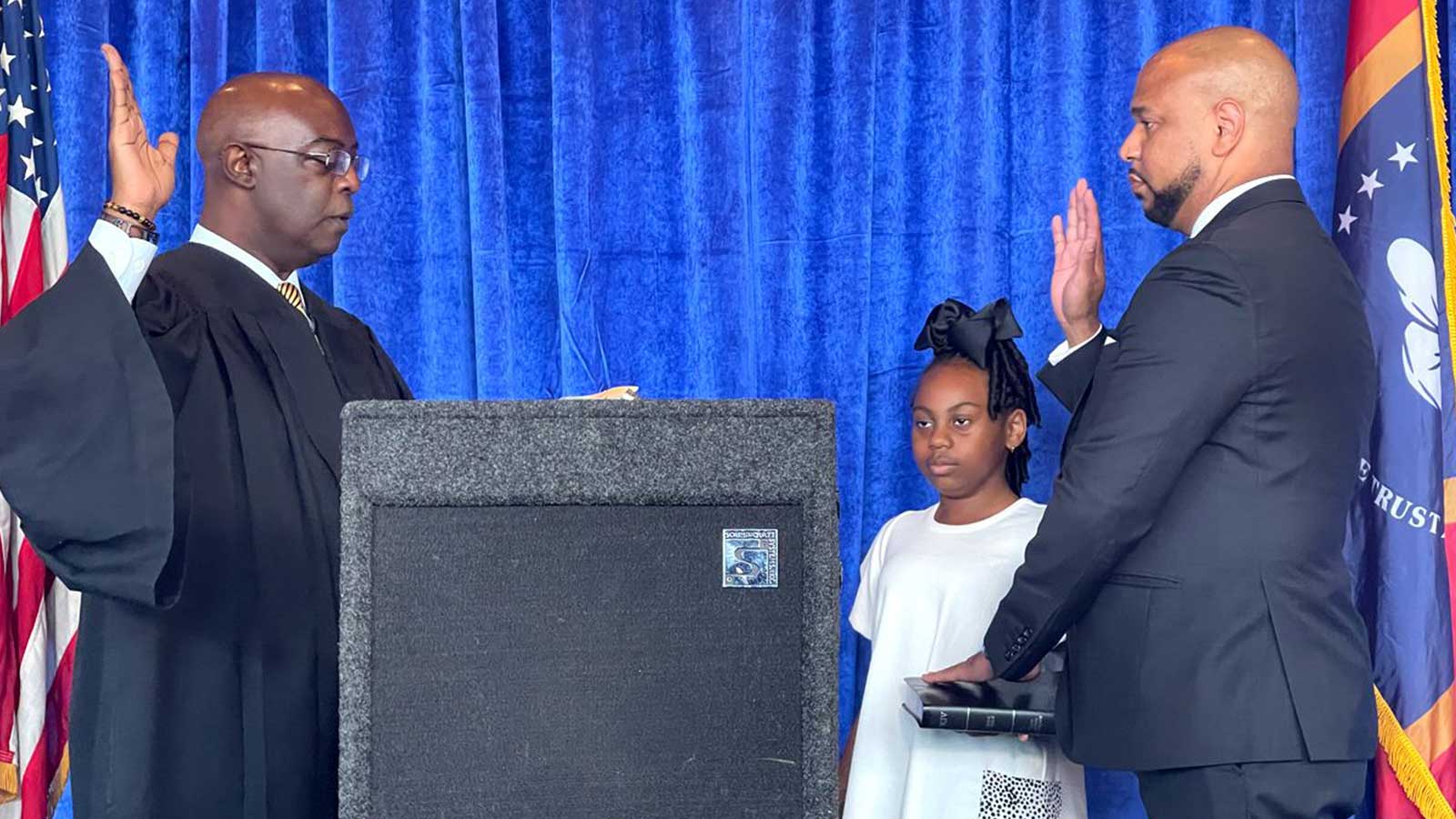 Hinds County Circuit Judge Winston L. Kidd swore Moore in as the 79th president yesterday at a hybrid ceremony held at the Capital Club on Congress Street in Jackson surrounded by his family, associates and friends.

Moore said that the theme for his tenure is, “Stand Up NBA—Strong, Tenacious Advocates for a New Deal, Uplifting Our People.” He named three policy and legislative goals: passage of the the John Lewis Voting Rights Act, the George Floyd Justice in Policing Act, and the Commission to Study and Develop Reparation Proposals for African Americans Act, constituting a “new deal” for African Americans in the United States.

“After 401 years of being brought over here as slaves, I just don’t believe Black and Brown people, especially Black people, have progressed as much as we should,” Moore told the Jackson Free Press after the event. “And I believe the laws that I mentioned will level the playing field. It would actually give us a shot of having an equitable playing field in America.”

Moore said that the John Lewis Voting Rights Act will strengthen the federal Voting Rights Act after the Supreme Court “gutted” some of its sections. “And so I believe this bill will restore Section 5 and make it where states have to (seek) pre-clearance before they change (voting) laws,” he added in the interview. “You see all these southern states have changed laws willy nilly now, and they are suppressing the vote.”

In Georgia, it’s now illegal to give someone a cup of water while they stand (in line to vote). That is asinine, purely asinine,” Moore continued. “And so, we know they had Black codes where they made everything illegal, even after we won the Civil War, and we had certain rights, but they basically terrorized Blacks from voting. So this was what we are headed to if we don’t change these laws.”

“The current wave of voter suppression is going to take us back to the Jim Crow days or before if we don’t get a handle on it,” Moore added.

Congress should be willing to lay tradition aside and pass those three laws even if it means doing away with the filibuster, a U.S. Senate rule that requires a two-thirds majority to end debate on a legislative item, and proceed to voting on it, Moore said. The filibuster means that a minority of senators can block a vote on legislation even with bipartisan support.

“We elected certain leaders to be put in place to make sure this happens in the Senate,” Moore said. “It’s run by Democrats, it’s run by progressives, and there should not be anything holding us back. We have the White House, and maybe we can get those 51 votes if they do away with the filibuster and the laws were passed. I don’t care about tradition. We put them (there) to do a job, and we expect them to do the job for which they were sent there to do.

“This is something that we cannot fail. It is vitally important to this generation and succeeding generations, and so we are going to fight hard.”

Moore said he has been handling police brutality cases since 2006 as a lawyer and believes that ending qualified immunity is important. That provision and creating a national police misconduct registry, the new president said, are in the George Floyd Justice in Policing Act.

“Qualified immunity is leading so many cops to get away with murder with impunity. And so if we do away with that, we will get more justice in the courtrooms,” he said. “That’s a very high hurdle to clear these days, and it’s just wrong.”

“You have to have an almost identical or similar act previously ruled unconstitutional before they can be held liable at this point. You do away with that, and you really curtail police brutality.”

Moore told the Jackson Free Press that he plans to host a reparation summit in Tulsa, Okla., in November during the 100th anniversary of the devastating Tulsa white massacre there. “HR 40 (Commission to Study and Develop Reparation Proposals for African Americans Act) is calling for a commission to study reparations, and while I support studying it, I want to study; I already know the end results: we need reparations,” he said.

Reparations for Black Americans should come from federal, state, and corporate and educational entities, Moore argues. “I believe the various states, especially states like Mississippi, that benefited greatly after the slave trade, they should have state-level reparations.” he said. “I believe there should be corporations, private corporations that give reparations because a lot of those corporations were built off the backs of slaves.”

Moore invoked the change in the Mississippi flag as a fruit of doggedness in the face of opposition in his speech urging the members to focus on getting a “New Deal” for Black Americans.

“Like through our heartfelt struggle that brought down and replaced the racist Mississippi flag, I aim to do everything with the power you haven’t trusted in me as your president to ensure that the struggles of our future generation are not the same as ours.”

The Moss Point native is the first Mississippian to lead the National Bar Association. He started practicing law 19 years ago and started his law firm in 2006, which merged with Cochran Firm two years ago, where he is now a managing partner.