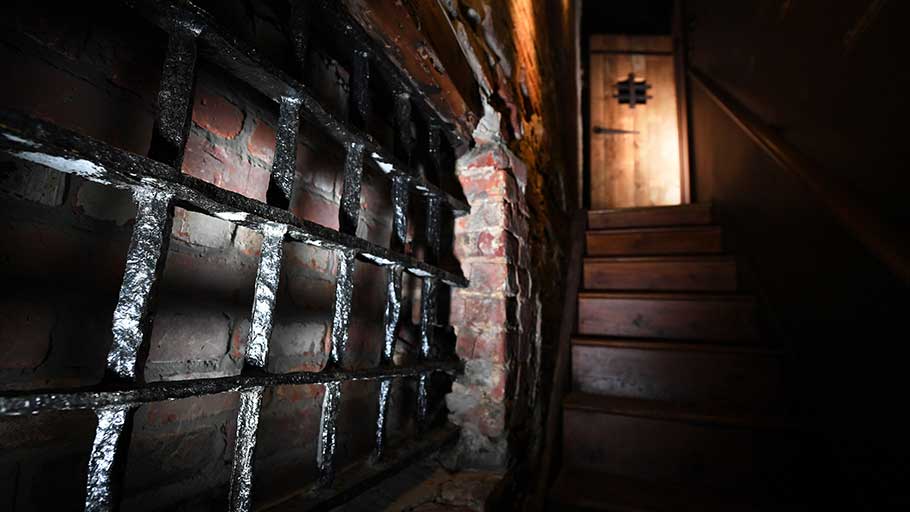 Original bars on a window in the basement of the Freedom House Museum in Alexandria, Va, where enslaved people were housed before being transported to the South. (Matt McClain/The Washington Post)

Americans have long looked to the decennial census for truths about themselves, and the 1840 version presented them with an improbable and incendiary notion.

Slavery was good for Black people, the figures indicated, and freedom led to insanity.

What else could this mean, advocates of slavery asked, but that Black people were mentally unsuited for freedom? The idea quickly spread to newspapers across the United States, the reports of elite European scientists and the halls of Congress.

“Slavery has a wonderful influence upon the development of moral faculties and the intellectual powers,” Edward Jarvis, a Louisville-based doctor wrote in a prominent medical journal, one of many such reports citing the census. It saves people “from some of the liabilities and dangers of active self-direction.”

As partisans battle this year over how to conduct the 2020 Census, the controversy over the 1840 count illustrates the harm that can come from bad numbers — and how hard it can be to correct a conclusion once it has been endowed with the government’s authority.

The numbers in the 1840 census were profoundly flawed, it would turn out, but for several years, advocates of slavery exploited them to portray Black people as better off enslaved.

Though often little more than a footnote in history texts, the debate over the 1840 census featured a cast of notables, involving, on the pro-slavery side, John C. Calhoun and on the other, John Quincy Adams and Harriet Beecher Stowe, the author of the influential anti-slavery novel “Uncle Tom’s Cabin.”

Its findings became a rhetorical weapon for slavery’s advocates, and for abolitionists, a source of exasperation.

For the pro-slavery side, Stowe wrote in 1853, the census “has been the very beetle, sledge-hammer and broad-axe.”

They frequently cited the findings, she said, with a “triumphant flourish,” exclaiming, “‘There, sir, what do you think of the census of 1840? You see, sir, the thing’s been tried, and it’s no go’…as it’s down in the census, and as ‘figures never lie,’ we must believe our own eyes.”

While moral controversies are often waged by uncompromising personalities, the rise and fall of the 1840 Census turns on what may be a rarer type in history — a person who admits a mistake and switches sides.

Edward Jarvis, the Louisville-based doctor who had written so cavalierly of the census and slavery’s “wonderful influence” in July 1842, recognized within 18 months that the numbers he had cited were at odds with reality.

He then waged a decade-long campaign for their correction, marshalling assistance from the fledgling American Statistical Association and John Quincy Adams, then a member of the House of Representatives.

Ultimately, he failed to move the government to correct or retract the numbers, but it is through his work that we know how badly flawed they were.

Jarvis had been drawn to the census through his interest in using population statistics to understand mental health, and the census of 1840 was the first to have a separate count for what were then called the “insane and idiotic.” Idiotic was the term used then for an intellectual disability.

Jarvis aimed, he wrote in his diary, to “show that insanity results in part from civilization.”

To his credit, Jarvis noticed immediately that there was something wrong with the census figures. Based on what he knew of the numbers of insane cared for by the governments in Massachusetts, New York, New Jersey and Connecticut, the totals reported by the census were much too small.

His mistake came in assuming that any errors in one direction would be balanced by other errors in the other — that is, taken together, the errors would offset one another and that the census was generally correct.

This assumption allowed him to draw what he felt were significant conclusions.

“[A]dmitting this report to be correct… there are important facts developed, which it is worthwhile here to notice,” he wrote in the Boston Medical and Surgical Journal.

Among his important conclusions: that slavery saved Black people from anxieties that lead to mental disquiet.

“Where there is the greatest mental torpor, we find the least insanity,” he wrote.

A chorus of pro-slavery advocates agreed.

In one prominent letter that appeared in newspapers across the United States advocating the annexation of Texas, Mississippi Sen. Robert J. Walker cited the census finding on Black people to assert that “in most cases, to live, to vegetate, is their only desire.”

“We have cited facts to prove,” said the Southern Literary Messenger, a prominent Richmond-based journal, that Black people “are not only happier in a state of slavery than of freedom, but we believe the happiest on this continent.”

Such arguments put anti-slavery forces in the unenviable position of having to impeach the government numbers.

“The whole hypothesis is founded in error — an error arising from a series of blunders in the returns of the census,” said The Liberator, the newspaper published by abolitionist William Lloyd Garrison.

Exactly what led Jarvis to reexamine the census data is unclear. There are scant indications in his diary or letters left at the Concord Free Public Library, where many of his papers are kept, that he would take on a prominent role in debunking the bogus pro-slavery statistics.

Though he eventually became a scientist of international stature, when the 1840 census figures were published, Jarvis was struggling, a physician who had for more than a decade failed to develop a thriving practice.

He’d tried his luck in three towns – Northfield and Concord, Mass. and then Louisville – and fell short in each one. It was a mystery, at least to Jarvis, why he couldn’t retain patients. In the telling of his biographer, Gerald N. Grob, he was a rigid figure with few close friends.

When someone hired him, Jarvis wrote in his diary, their “diseases are cured, they praise me, get others to employ me. But when they are sick again, they send for another physician … such is the fickleness of people here.”

Maybe even more aggravating, Jarvis held high, noble-sounding aspirations for himself and confessed to his diary his “secret bending for notoriety.”

A native of Concord, Mass., and a contemporary of Ralph Waldo Emerson and Henry David Thoreau, Jarvis also seemed little moved by the issue of slavery.

Though he’d grown up in a place where slavery was illegal, seeing enslaved people during a visit to the nation’s capital didn’t elicit his condemnation. Instead, he seemed to lament it more for its inefficiency than its inhumanity.

The enslaved are a “lazy, idle unprofitable race, doing not half the work a white can do… caring nothing for their owners interest,” he wrote. “It would be a blessing to this country to transport the whole to Africa.”

Later, when Jarvis moved to Louisville to try his fortunes there, his office was within a few blocks of what was, about the same time in the 1840s, a notorious slave market. But if Jarvis was horrified by the scene, it does not come up in the 30 pages of his diary that cover his time in the city.

His life, however, was changing. Between his first mistaken paper on the census and the second one correcting it, Jarvis had left Louisville to return to Massachusetts, where he set up a psychiatric practice based in Dorchester. Situated again in his home state, he was closer to the wellsprings of abolitionism.

But it may be that Jarvis’s turn against the bogus census was merely a matter of his cast of mind — his devotion to arithmetic precision.

In a prolonged passage in his biography, for example, he details how he resolved an eight-cent disparity in the $12,000 budget for a civic group he’d led. After days of searching, he explained, he discovered six cents in one mistake and a one-cent deviation in two others. He was unusually fastidious when it came to numbers and, apparently, proud of it.

His debunking of the 1840 census was equally painstaking, based largely on comparing census numbers on insanity to public records kept by state and local governments. The errors were abundant. He could see, for example, that in several towns, the count of insane Black people was greater than the number of Black people in the town. In Worcester, Mass., the census had counted the 133 White insane people as Black.

The most telling evidence against the 1840 Census, however, might be the results of the next census. In 1850, the number of free Black people considered insane or “idiotic” in northern states fell precipitously, according to simple calculations by The Post.

He wrote of the census errors as if he had been betrayed.

“We confess, we are disappointed, we are mortified,” Jarvis wrote of the 1840 census. “Such a document as we have described, heavy with its errors and its misstatements, instead of being a messenger of truth to the world…[is] a bearer of falsehood to confuse and mislead.”

He soon joined a concerted effort to correct the census. Enlisting the fledgling American Statistical Association, Jarvis co-authored a separate report detailing its errors regarding the insane, as well as others. John Quincy Adams, the former president who was then a member of the House, pressed repeatedly for a correction. James McCune Smith, a prominent Black physician, advanced the issue as well.

By February 1844, success at last seemed imminent. The House ordered the Secretary of State, who oversaw the census, to check the numbers for “gross errors.” congressional commitees, too, generally agreed with Jarvis and the other critics of the census.

But politics can trump statistics. The Secretary of State ordered to review the census was John C. Calhoun, a defender of slavery. He’d already been citing the figures to prove that slavery was a boon for Black people.

“Here is the proof of the necessity of slavery,” Calhoun said, in remarks Jarvis recorded in his diary. “The African is incapable of self-care and sinks into lunacy under the burden of freedom.”

Calhoun said he found nothing significant in the the exhaustive research by Jarvis and the American Statistical Association.

“That [the census] may contain errors, more or less, is hardly to be doubted,” he wrote in February 1845, yet in his view it was generally correct..

It “would seem hardly possible” that any such errors “materially affected the correctness of the general result.”

Moreover, Calhoun persisted in using the disputed figures to further his argument. The census, he reiterated, showed that for Black people ending slavery would be a “curse instead of a blessing.”

For abolitionists, the defeat that would sting for years.

“Every fable, allegory and romance, must have its moral,” Stowe wrote in 1853. “The moral of this ought to be deeply considered by the American people. In order to gain capital for the extension of slave territory, the most important statistical document of the United States has been boldly, grossly and perseveringly falsified, and stands falsified to this day.”