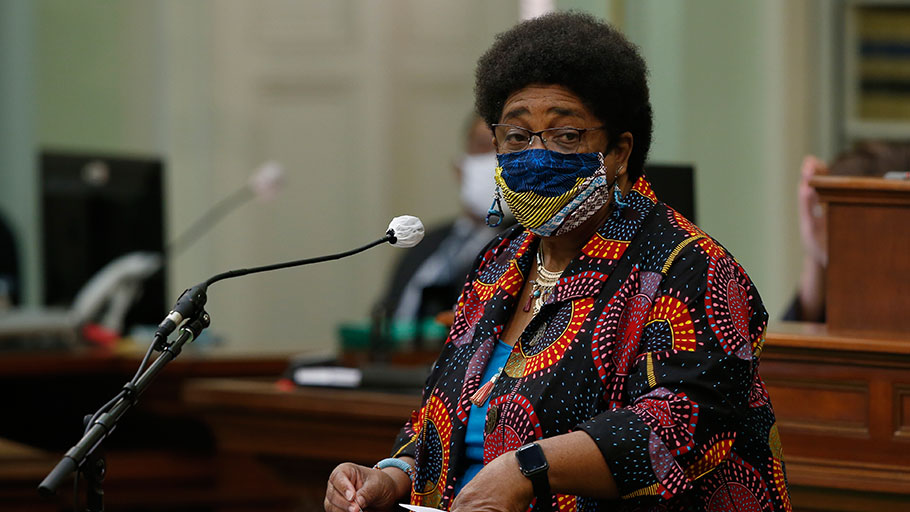 A first-in-the-nation task force in California to study and recommend reparations for African Americans held its inaugural meeting Tuesday, launching a two-year process to address the harms of slavery and systemic racism despite the federal government’s inaction.

The nine members of the task force, appointed by Gov. Gavin Newsom and legislative leaders, include the descendants of slaves who are now prominent lawyers, academics and politicians. The group’s newly elected chair is a young lawyer who specializes in intellectual property, and their vice-chair is a longtime civil rights activist arrested with the Rev. Dr. Martin Luther King, Jr. at a lunch counter sit-in in 1961.

“I’m so thankful to my ancestors, who survived so much trauma, so much pain, so much tragedy, so much brutality, so that I could live,” said Lisa Holder, a civil rights attorney in Los Angeles. “And I am ready to fight to deliver them — our ancestors —justice.”

Tuesday’s meeting of the first state reparations committee in the U.S. came as President Joe Biden commemorated the lives of hundreds of Black people killed by a white mob in what was then a thriving African-American community in Tulsa, Oklahoma, a century ago. It also comes just over a year after George Floyd, a Black man, was murdered by a white police officer in Minnesota.

Secretary of State Shirley Weber, who as a state assemblywoman authored the state legislation creating the task force, noted the solemnity of the occasion as well as the opportunity to right an historic wrong that continues today, in the form of large racial disparities in wealth, health and education. African Americans make up just 6% of California’s population yet were 30% of an estimated 250,000 people experiencing homelessness who sought help in 2020.

“Your task is to determine the depth of the harm, and the ways in which we are to repair that harm,” said Weber, whose parents were sharecroppers forced to leave the South.

Critics have said that California did not have slaves as in other states and should not have to study reparations— or pay for it. But Weber said the state is an economic powerhouse that can point the way for a federal government that has been unable to address the issue. It would not replace any reparations agreed to by the federal government.

Members of the task force pointed out that Black Americans have heard all their lives that they need to improve themselves, yet the truth is that they’ve been held back by outright racism and discriminatory laws that prevented them from getting conventional bank loans and purchasing homes. Their neighborhoods in San Francisco and Los Angeles were razed in the name of development.

“We have lost more than we have ever taken from this country. We have given more than has ever been given to us,” said task force member and state Sen. Steven Bradford. He would like to model a reparations program on the GI bill, allowing for free college and assistance with home-buying.

In 1988, President Ronald Reagan signed legislation providing $20,000 in redress and a formal apology to every surviving Japanese American incarcerated during World War II. But a federal slavery reparations bill, commonly referred to as H.R. 40, has languished in Congress since it was first introduced in 1989.

It passed out of the House Judiciary Committee in April, but it faces steep odds. The bill refers to the failed government effort to provide 40 acres (16 hectares) of land to newly freed slaves as the Civil War wound down.

Some people who called into the virtual meeting implored the group to come up with targeted proposals and cash payments to make whole the descendants of Black slaves specifically.

“This is really about lineage, it’s not just about color. The government owes a debt that’s long overdue,” said Harriet Barton, a longtime resident of San Fernando Valley in Southern California.

The task force’s duties include summarizing discrimination against Black people in law, and in the private and public sectors; calculating compensation and educating the public on its findings; and crafting an apology.

Newsom, a Democrat, issued a formal apology to Native American tribal leaders in 2019. He also announced the creation of a council to examine the state’s role in campaigns to exterminate and exploit indigenous people in the state.

Featured Image: In this June 11, 2020, file photo, then-Assemblywoman Shirley Weber calls on lawmakers to create a task force to study and develop reparation proposals for African Americans, during the Assembly session in Sacramento, Calif. A landmark California committee to study reparations for African Americans is meeting for its first time, Tuesday, June 1, 2021, launching a two-year process to address the harms of slavery and systemic racism. Secretary of State Shirley Weber, who as an assemblymember authored the legislation creating the task force, noted the solemnity of the occasion as well as the opportunity to right an historic wrong. Credit: Rich Pedroncelli, AP.