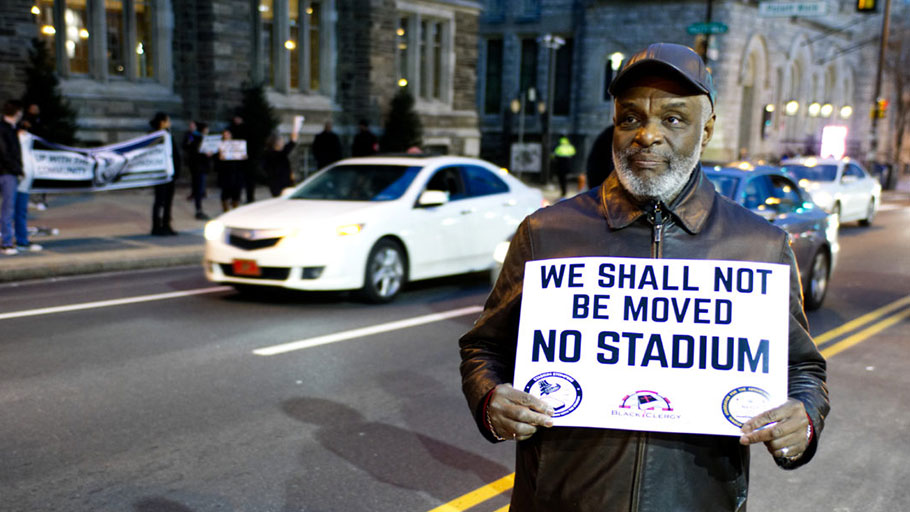 You Are Here: Home » Blog » Reparations » Gentrification, ‘Negro Removal,’ and a Housing Crisis

Gentrification involves the transformation of under-invested, predominately poor communities from low value to high value. During this transformation, long-time residents and businesses are displaced; unable to afford higher rents, mortgages, and property taxes.

For some, gentrification is a process of renovating deteriorated urban neighborhoods through the influx of more affluent residents. To others, gentrification magnifies the racial divide as it shifts a neighborhood’s racial composition as white residents move in and minorities are moved out.

According to a 2015 Governing survey, gentrification accelerated in several cities with nearly 20% of neighborhoods with lower incomes and home values experiencing gentrification since 2000. That’s compared to only 9% during the 1990s.

Gentrification is a hot topic. The Neighborhood, a recent comedic sitcom on CBS starring Cedric the Entertainer and Tichina Arnold, attempts to make light of white neighbors, moving into predominantly black neighborhoods. Although the sitcom creates opportunities for robust discussion, the results of gentrification are rarely viewed as a laughing matter.

The causes of gentrification are debatable. Some suggest it is caused by social and cultural factors, including family structure, rapid job growth, lack of housing, traffic congestion, and public-sector policies.

Coined “Negro Removal” in the 1960’s by James Baldwin, the process of gentrification can happen so gradually it appears to be a subtle phenomenon. To address gentrification, Marqueece Harris-Dawson, Los Angeles city council member (8th District), and congresswoman Karen Bass gathered local government officials and community and faith-based leaders for a discussion on the causes and responses to gentrification at the Congressional Black Caucus’ 48th Annual Legislative Conference. The conversation included Nefertiti Jackmon, Executive Director, Six Square Austin’s Black Cultural District; Tracey Ross, Associate Director, Policy Link; Mindy Fullilove, Clinical Psychiatrist and Author of Root Shock: How Tearing Up City Neighborhoods Hurt America and What We Can Do About It; and Ras Baraka, Mayor of Newark, New Jersey.

“It is inspiring to see the leadership on the panel committed to finding solutions,” said Bass. “We need to build more coalitions of government, community, and academics to address this critical community issue.”

“We studied the issue [and] we realized rapid displacement was happening in every big city across the country. I wanted to convene this discussion because this is a national crisis and we need a national discussion to identify concrete solutions,” stated Harris-Dawson.

Solutions like Destination Crenshaw, the first outdoor project of its kind in Los Angeles, using an iconic city street name to provide the context for public artwork and design, will formally establish and memorialize an African American neighborhood and set the tone for community revitalization.

Destination Crenshaw will also create and install a 1.1-mile long open-air street museum along Crenshaw Boulevard that will flank the new Crenshaw/Los Angeles Airport (LAX) Rail Line, serving as the gateway to the City of Los Angeles for riders from across the globe.

Other solutions steered by Harris-Dawson’s office include collaborating with academia to initiate case studies and needs assessments on how to preserve areas at risk; establishing partnerships to create social and economic programs to protect communities and prevent displacement; and introducing policy.

Pending solutions include a $700 million renovation plan to renovate the historic Crenshaw Baldwin Hills Plaza in South Los Angeles. It is estimated that the redevelopment project will generate thousands of new jobs in a community facing a 12% unemployment rate, while also helping to sustain several Black and minority-owned businesses in the plaza.

Since gentrification is exacerbated by the lack of jobs, education, and opportunities within the community; local business leaders play an integral part in how the state of the local economy affects gentrification. Here is how:

-Section 125 Plans – When asked ‘What can people of color do to avoid displacement?’ Ras Baraka quickly answered, “You have to own.” Section 125 plans like 401K plans and other retirement and savings vehicles can provide employees with a road map to financial freedom. Section 125 savings plans and other financial tools that companies offer for their employees can often be the only solution for those seeking to save money, save their property, or purchase. The majority of companies offer some matching contribution for an average of 2.7% of a person’s pay. The most common match is 50 cents on the dollar. For every $1 you contribute to the company’s 401(k), the company will contribute 50 cents. These type of plans provide the ability to receive a match and can be one method for a home buyer to secure a down payment or collateral they need to purchase a property.

-Credit Unions – According to Professor Fullilove, “Black professionals really want to help people build wealth. The problem is in many of these situations (for example with the foreclosure crisis), people went into buying houses to build wealth, but the wealth was stripped. A huge amount of wealth was lost in Black and Latino communities. So many big employers have credit unions that [can be a] tool.” Using credit unions to provide financial backing can benefit.

-Employee Assistance Programs – An employer-sponsored employee assistance plan (EAP) is a work-based intervention program designed to identify and assist employees in resolving personal problems that may be adversely affecting their performance at work, which include emotional issues and financial problems. EAPs may also offer a wide array of services covering basic legal assistance and referrals, help to find elder care services, wellness programs, and more. Employers usually pay for EAPs, and their services are often available not only to employees but to employees’ immediate family members or anyone living in employees’ homes. According to the 2016 SHRM Employee Benefits research report, 77% of surveyed employers offered an employer-paid EAP. EAPs may provide credit-counseling options, referrals to legal aid, and other advice for first-time homebuyers or those in need of retaining, securing, or transferring property.

-Recruitment and Hiring Practices – In Los Angeles, Newark, and other cities, local officials are putting pressure on companies through subsidies and penalties, ensuring residents are hired so they can work in the city where they live.

In Los Angeles, Harris-Dawson and other elected officials are guaranteeing that projects, including the Baldwin Hills Crenshaw Mall, have a “very aggressive commitment to hire local and to help make sure African American workers are a part of that process. Many companies working on big public projects like LAX and (our transportation system/Metro) have done the same thing,” explains Harris-Dawson. In Newark, companies such as Prudential, St. Barnabas Hospital, and Rutgers-Newark are being held accountable to hire from the community.

-Tuition Reimbursement Programs– Since displacement and the lack of opportunity are interrelated, the ability to receive tuition reimbursement to pursue a degree can narrow the gap. In a 2016 study, Cigna found that participants in a company offering tuition reimbursement program was 10% more likely to be promoted and made an average of 43% more, over three years, than colleagues who did not take advantage of the program. Increases in salary and position can mean the difference between losing or saving your home — especially in communities where residents are struggling financially. Employees can also benefit from employers that offer student loan repayment assistance.

Gentrification is a complex issue.  Most would agree we need a diverse community and people should not be driven out. At the same time, cities need development, legislation implemented, institutions built, and families strengthened.

Businesses that benefit from the community are being held accountable to be benefactors to the community. As we prepare for upcoming elections, it is essential to pay close attention to those ballot measures that may affect gentrification. Measures such as Proposition 10 in Los Angeles, deal with issues that can hurt or help struggling renters are now on the ballot.

Each city has its challenges, and there is not a one-size-fit-all solution. Businesses are now on the front lines and have the opportunity to collaborate with policymakers to find remedies.