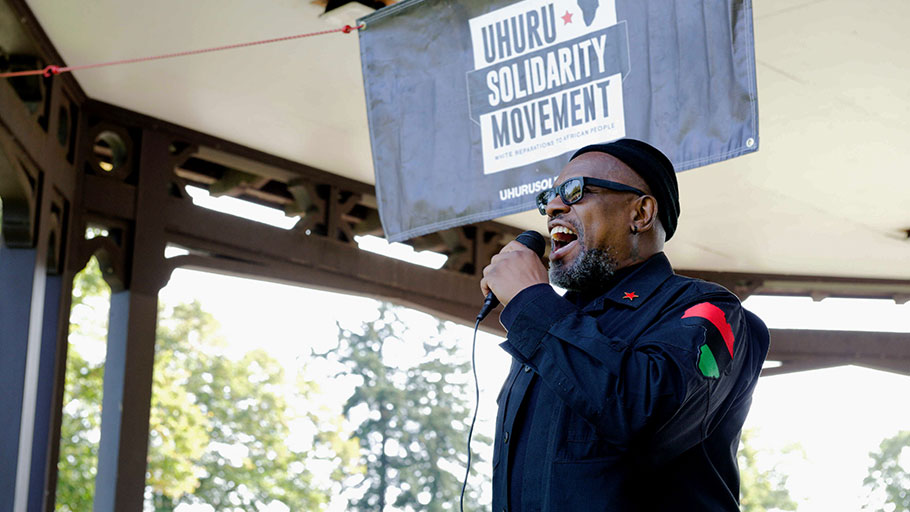 In the late morning of Saturday, October 17, a group of about 25 mostly white protesters gathered in a grassy lot next to Dawson Park in North Portland—land which once housed a vibrant Black community. A bright red banner tied between a tree and street sign read “March for Reparations to African People.” The Uhuru Solidarity Movement organized the march, which stretched across five other cities around the country.

A table with flyers and an email list stood in the grass, next to a stack of handwritten signs with phrases such as “Reparations Now!” and “Make Wall Street Pay Reparations to African People.” A woman who helped organize the event picked up a megaphone, leading the group through chants before the march.

The Uhuru Solidarity Movement is an organization of white people working towards reparations for African people, under the leadership of the African People’s Socialist Party. The group’s stated mission is to “organize in the white community to build a mass movement for white reparations to African people.”

“As a white person, this struggle needs your attention,” said Sobek Meri-Ra, head of the Los Angeles Chapter of APSP. He continued, “We are here demanding reparations. We are not asking.”

The march began next to Dawson park heading north on Williams Street, moving west along Fremont and north again up Mississippi Avenue.

“We have people gentrifying neighborhoods,” said Amber Edwards, an art educator, founder of Black Art Is and a member of Change the Museum, who was waiting in line for an artist’s pop up shop with her son. “It’s really in fact ignoring the history of the space and the ability to keep communities together.” She added, “to see Black people marching down their street and their neighborhood is uplifting; it’s a reminder of the history of this space, and hopefully it’s inspiring of all activists of all races.”

After winding onto Albina, the march ended at Peninsula Park where a speaker and microphone were set up at the gazebo stage. Two tables were set up with shirts, books, newspapers and snacks for sale. Meri-Ra spoke to the small crowd about reparations and class solidarity across race.

Other speakers discussed reparations owed by businesses, non-federal government bodies and individuals such as Bank of America, Oregon and Ted Wheeler.

After several speakers and a spoken word poem by local artist Jolly Wrapper, Uhuru volunteers moved through the crowd taking donations for their reparations fund. The group reached the day’s fundraising goal of $1000.

“I think we should be talking about reparations every single day now—I think that it’s time, it’s way overdue,” Edwards said. “We need to continue to advocate for that because if we’re not going to ask for it, who’s going to? 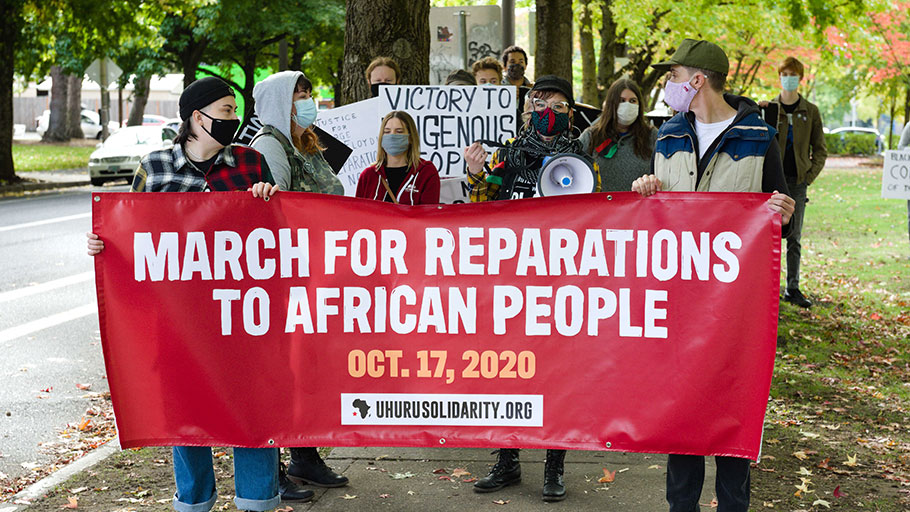 Protesters line up, ready to start the March for Reparations to African People

Featured image: Sobek Meri-Ra from the Los Angeles chapter of the African People’s Socialist Party speaks to the crowd gathered at the march’s end in Peninsula Park