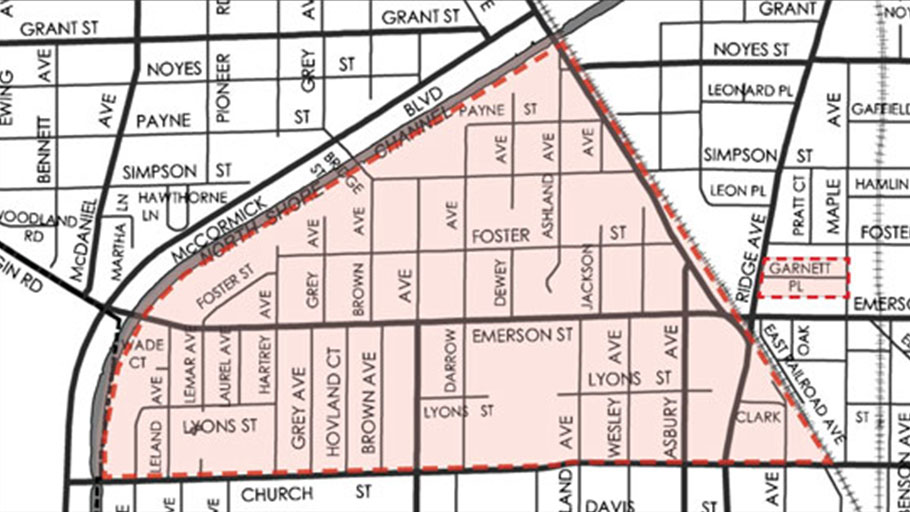 Reparations Subcommittee Decides on Three Housing Programs, $25,000 for Each

By Larry Gavin, Evanston Round Table —

On July 24, members of the Reparations Subcommittee continued to discuss how to use the Reparations Funds to provide a remedy for Black residents whose ancestors or who themselves suffered discrimination in housing due to actions of the City. The Subcommittee, composed of Alderman Robin Rue Simmons, Peter Braithwaite, and Ann Rainey, also talked briefly about a proposal to establish a Stakeholder Reparations Authority.

In this phase, the subcommittee is settling on three programs which would provide $25,000 to about 16 families, with a commitment that the subcommittee will attempt to raise a lot more money.

Last November, City Council decided to deposit into a Reparations Fund up to $10 million in City tax revenues collected from the sale of recreational marijuana. Council also created the Reparations Subcommittee and asked the committee to consider the viability of two recommendations: 1) housing assistance and relief initiatives for Black residents in Evanston and; 2) various economic development programs and opportunities for Black residents and entrepreneurs in Evanston.

On July 24, City staff provided a short description of these two programs and also proposed a new use of the funds: to help people pay down their mortgage balance.

Ald. Simmons noted that these programs would provide a remedy for both homebuyers and homeowners. “And it’s laid out into home purchase, home improvement, and mortgage assistance,” she said.

The three programs and a description of each program, as proposed by staff, are as follows:

? “Home Purchase Funds may be used by eligible individuals to purchase real property located within Evanston city limits and occupied as their principal residence. The down payment/closing cost assistance is provided in the form of direct payment to the approved homeowner. Purchase assistance shall be up to $25,000.”

? “Home Improvement Funds may be used by eligible individuals to improve the quality of existing property. Home improvement encourages the revitalization, preservation, and stabilization of Black homes. The home improvement assistance shall be up to $25,000.”

? “Mortgage Assistance Funds may be used toward mortgage principal, interest and/or late penalties for a residential primary residence in Evanston. This cannot go towards taxes. Help them to build equity. The mortgage assistance shall be up to $25,000.”

Subcommittee members concurred that an applicant could take part in only one of these programs.

Ald. Simmons noted, though, that if an applicant obtained funding through one of these programs, the applicant would not be disqualified from participating in other City programs, such as the first-time homebuyer grant program.

The initial budget for these three programs is $400,000, which the Subcommittee recognized could be increased in the future.

Members of the Subcommittee discussed some additional issues.

An issue was raised whether the amounts available under the Home Purchase Assistance program would be limited to the amount needed for a down payment, or if the homebuyer could receive $25,000 and apply the entire amount toward the purchase of the home.

Kimberly Richardson, Interim Assistant City Manager, said since one purpose of reparations was to assist Black people to build equity, they should be entitled to use the entire $25,000 toward the purchase of a home, even if they only needed $5,000 to make a down payment.

Ald. Simmons raised the issue, though, “There’s so much need and so little resources.” She said, if the initial budget for reparations is $400,000 and the assistance is $25,000 across the board, only 16 households would be helped.

She said the initial idea was to provide down-payment assistance “up to” $25,000, with the goal of assisting people toward home ownership. If the down payment assistance needed was less than $25,000, it would leave some funds in the program to assist other homebuyers, she said.

Ald. Simmons agreed saying, “Why don’t we move forward with that? If we move forward with $25,000 across the board, it’s the same amount of wealth investment to qualified residents. Then it will be our challenge to grow this program or find more partners willing to support the program. And that way it keeps it easy. There’s no disparity on how much of a housing, reparation any qualified resident is receiving.”

Ald. Rainey added, “We’re going to stretch it, and we’re going to get more funding. So let’s leave it. I’m fairly positive on that.”

Ald. Rainey said the mortgage assistance program “could actually overtake the other two.” She added, “This might be the provision that is most needed, and I’m concerned that putting this in is going to cause us anxiety because it might consume most of our $400,000.” She asked, “How are we going to decide who is most in need of this assistance?” and “If people would have to show they had received a foreclosure notices.”

Ald. Simmons said there would not be any requirement that there be a foreclosure or a threat of foreclosure. “There’s no income qualifications or financial status. This would be true to the vision of reparations for Blacks in Evanston, and it would build wealth,” which she said was “one goal of reparations.”

Ms. Richardson said some community members, especially seniors, asked “What about us?” One way to help people build wealth is to increase the equity in their homes, she said. “So an individual can use this assistance in any way to pay off the mortgage, to help pay down the principal or interest, to pay any penalties that they may have. … It allows for more people to use the funding in a way to bring equity into their home.”

Under the housing remedy proposal, people seeking to participate in one of the three housing programs must meet one of the following two criteria:

These criteria have not change since they were last discussed by the Subcommittee. Ald. Simmons said, “I think that is an area that we are going to have to rely heavily on our law staff.”

Nick Cummings, Deputy City Attorney, said applicants must demonstrate that they meet one of the two criteria. He said if an applicant was seeking to qualify under the legacy provision, there were a lot of historical documents, recorded deeds, census data and other records available. In addition, Dino Robinson, the founder of Shorefront, and Dr. Jenny Thompson, Director of Education at the Evanston History Center, are putting together a report providing information about historic policies and practices, both governmental and societal, that discriminated against Black people in Evanston. Whether an applicant could rely on this report to prove a legacy claim is not yet clear.

Mr. Cummings added that if a person was claiming they personally suffered discrimination at the hands of the City, “that is certainly something else entirely different and may require or may necessitate the assistance of an attorney,” Mr. Cummings said, “but I can’t say that for certain.”

The Subcommittee has not yet considered who would decide if an applicant satisfied one of the two criteria. Mr. Cummings said, “It certainly is the understanding, you don’t expect it to be City staff to make those decisions solely.”

He suggested that the determination might be made by the proposed Stakeholders Reparations Authority.

Use of the Word “Loan”

Under each program, the housing assistance is structured as a “forgivable loan,” as opposed to a “grant.” Under the programs, an applicant would be required to live in the residence that he or she was purchasing, improving or received mortgage assistance on for 10 years, and 10% of the assistance would be forgiven each year. If the applicant sold the property or moved before the 10 years expired, the applicant would be required to pay back the balance remaining, and it would go back into the Reparations Fund.

Ald. Simmons said some people in the community were confused about the terminology and asked if it could be called something else and if it could be structured as a gift.

Mr. Cummings said he would have to check whether a City could make gifts of this nature, and, if it were a gift, if the City would be subject to a gift tax on any amount above the annual exclusion.

Ald. Simmons said that a draft proposal to form a Stakeholder Reparations Authority was now posted on the City’s website. Lionel Jean Baptiste, a former alderman and current Cook County Circuit Court Judge, presented the proposal at an earlier Subcommittee meeting. If approved, the Stakeholders Reparations Authority would create an ongoing structure to recommend how to use reparation funds in the future.

Ald. Simmons said Dino Robinson, the founder of Shorefront, helped to prepare the draft. Mr. Robinson briefly discussed that the representatives would be appointed by the Mayor to serve for terms of two years. “Representatives will be pooled from active organizations that best represent the interests of Evanston’s Black community [which organizations are listed in an appendix to the proposal]. There shall be between 9 and 13 members, with about 50% rotating off every year.”

Mr. Robinson said they wanted community feedback on the proposal.

In public comments after the meeting, community member Tina Paden said the housing programs proposed by the Subcommittee will help only 16 households. She asked, what if 100 people apply? She also noted that the programs would not assist renters.

The next scheduled meeting of the Reparations Subcommittee is 9:15 a.m. on Aug. 28.