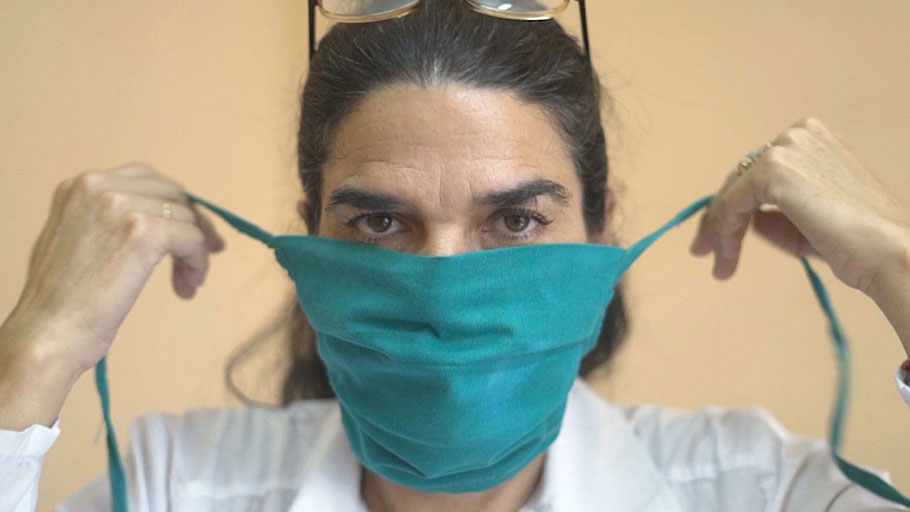 You Are Here: Home » Blog » Commentaries/Opinions » Belly of the Beast: Cuba’s Untold Stories

Dr. Liz Caballero putting on her mask before going door-to-door to check on residents in the El Carmelo municipality of Havana, Cuba, March 31, 2020, Belly of the Beast

In the last month, more than a thousand Cuban doctors and nurses have traveled to twenty countries to join the global battle against Covid-19. There’s historical precedence for this.

By Reed Lindsay, Belly of the Beast —

AVANA, CUBA—Every night at 9 PM, applause erupts across Havana, filling the city’s dark, empty streets. It’s hard to see where the clapping is coming from, but if you look up, you can spot people leaning out windows and over balconies.

I’m currently in Cuba with Belly of the Beast, a media organization that reports on the island through journalism and cinematography.

On most nights, after the applause for the doctors, I call my mother to check in. She lives in Blaine County, Idaho, which recently had one of the highest infection rates in the US. As of Thursday, there were 467 cases among the county’s 23,000 residents.

As a journalist, I’ve covered war, political violence, and natural disasters, and it’s typically my mother who is worried about my safety. She still is. Though, strange as it may seem, I feel I am safer in Cuba than she is in the US.

Cuba’s doctors, who are revered like servicemen and women are in the US, also fight, like soldiers, on the front lines in far-off places against deadly enemies. In the last month, more than a thousand Cuban doctors and nurses have traveled to twenty countries to join the global battle against Covid-19. There’s historical precedence for this. In 2011, Cuba was the first country to send doctors to Haiti to fight a cholera epidemic. In 2016, then US Ambassador to the UN Samantha Power called Cuba’s efforts to combat Ebola in West Africa “awe-inspiring.”

But while Cuban doctors have been welcomed from Andorra to Togo, the country’s medical internationalism has been condemned by the Trump administration. US officials claim the 30,000 Cuban doctors currently serving in medical missions in sixty countries are victims of “modern slavery.” Last month, shortly after fifty Cuban doctors arrived in Lombardy, Italy, the State Department tweeted that countries should “scrutinize agreements” with Cuba to “end labor abuses.”

I met some of the Italy-bound doctors at a small ceremony on the outskirts of Havana hours before they left on buses for the airport.

“Nobody is forcing me to be here,” said Dr. Graciliano Díaz Bartolo, a veteran of medical missions to Bolivia, Haiti, and Guinea. “Being humane is what’s most important, to share what we have with those who are in need. And right now, Italy needs us.”

My confidence in Cuba is not rooted in numbers. Cuba has 862 cases, giving it an incidence rate 265 times lower than that of Blaine County, Idaho. (Cuba is at an earlier stage of contagion and cases are expected to increase at a more rapid pace in the coming weeks.) Instead, my assurance is based on the country’s public health system and its extensive network of dedicated, community-based doctors. Even with so many doctors abroad, 70,000 physicians remain in Cuba, giving the country one of the highest doctor-to-patient ratios in the world—more than double that of the US.

On March 31, I followed one of these doctors, Liz Caballero, as she went door-to-door with two second-year medical students in the El Carmelo municipality of Havana. Dr. Liz, as she introduces herself, and her students hustled down alleys and up narrow stairways, knocking on dozens of doors, polling and educating residents on symptoms and best practices to avoid contagion. During dengue outbreaks, a small army of health professionals and students knock on every door across the country. This has become a daily routine in recent weeks—I received a check-in the other day from a pair of students while a doctor examined my ninety-five-year-old neighbor.

“They come every day around this time,” one resident told me. “I’m so grateful for what they’re doing,” said another.

Even in normal times, house calls are common in Cuba, where “family doctors” living in the same communities as their patients are the lynchpin of the country’s free healthcare system.

“The family doctor is playing a crucial role in fighting coronavirus because we have the community in our hands,” said Dr. Liz. “We’re working hard not just to avoid the worst-case scenario, but to alter the course of the disease.”

Three days after my visit to El Carmelo, it became the first neighborhood in Havana to be quarantined, after registering its eighth case of the coronavirus.

In spite of its inspiring public health system, Cuba is still facing immense challenges as it attempts to slow the spread of Covid-19. In the last three years, Trump has tightened the near sixty-year-old embargo against the island, devastating its already fragile economy. Shortages of food and medicine were common before the pandemic. They are worse now.

Lines for chicken, toilet paper, and detergent are long, and the supply often disappears before the line does. Earlier this month, Cuban officials said that a donation of facemasks, diagnostic kits, ventilators, and gloves was blocked when Avianca Airlines, a Colombian company, refused to deliver the aid from China because its major shareholder was subject to US sanctions.

And still, the greatest resource of Cuba’s health system is undoubtedly human.

In El Carmelo, I asked the two medical students following Dr. Liz if they were optimistic about the possibility of Cuba’s containing the virus. They laughed as if I’d posed a stupid question.

“Always,” said nineteen-year-old Talía González. “What kind of doctors would we be if we were pessimistic?”

Reed Lindsay is an award-winning journalist and documentary filmmaker who has sought to expose injustices and abuse of power and to create awareness about issues that have been ignored or misunderstood. He heads up Belly of the Beast, a media organization that shares Cuba’s untold stories through journalism and cinematography. (April 2020)

The article and video are part of an exciting project called Belly of the Beast that tells Cuba’s untold stories through rock-solid journalism and stunning cinematography. We’ve got a documentary series in the works called Trump’s War on Cuba, and in the meantime, we are covering Cuba’s unique response to Covid-19. Check us out and follow us on Twitter, Facebook and Instagram.