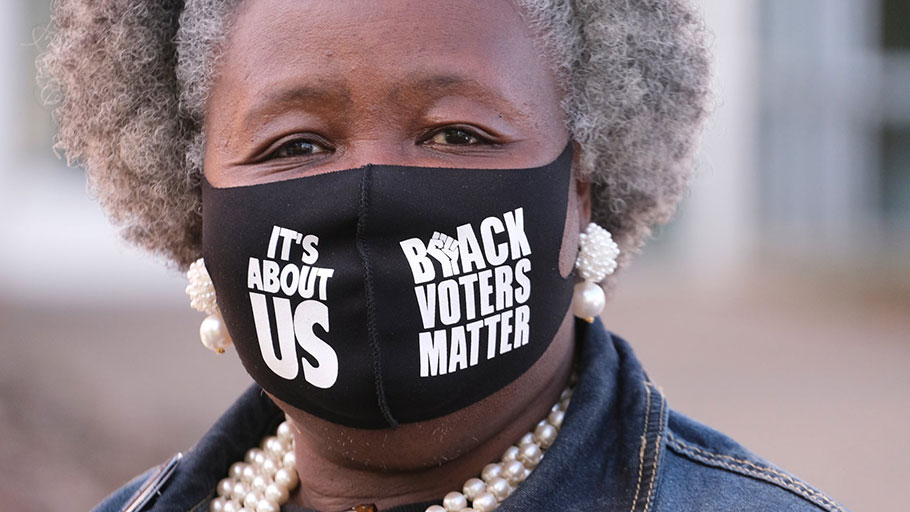 You Are Here: Home » Blog » Commentaries/Opinions » Black voters drove Joe Biden’s victory – and have offered this country a reboot

We have mountains yet to climb, but Black voters should feel pride in our incredible voter mobilization. Look at the numbers.

By Cliff Albright, The Guardian —

It is now certain that Joe Biden and Kamala Harris are our next president and vice-president. Black voters across the US are taking a well-earned victory lap. Not even the masks we must wear can hide the joy and hope on people’s faces.

For hundreds of years, Black folks have shown love and dedication to a country that has not reciprocated; still we show up for ourselves and our allies. We are responsible for saving this democracy from chaos and ruin. But, as we celebrate, I’d like to offer five thoughts for consideration.

First, let’s talk about how Black voters shaped this ticket, which has garnered more than 75m votes – more than any other in American history, including Obama-Biden. To be clear, Biden owes his selection as the party’s nominee to Black voters in the south, who were prescient enough to know that he was the candidate most likely to win. Kamala Harris’s selection as his running mate is also a legacy of Black voter organizing and demands that he choose a Black woman to bring the expertise and racial acumen that he needed to govern the US. Even FiveThirtyEight’s Nate Silver has noted: “Democrats are 3-0 this century when they have a Black person on the ticket, and 0-3 when they don’t.”

Second, let’s talk about the Black turnout in the race. Many analysts have understandably put a spotlight on Black voters in key cities including Detroit, Milwaukee, Philadelphia, Pittsburgh and Atlanta. Biden won the city of Detroit with 94% of the vote while Trump received only 5%. In Pennsylvania, where Black voters made up 8% of the electorate, 93% voted for Joe Biden, including the critical vote-by-mail turnout that ultimately decided the election. Nationally, it’s estimated that 87% of Black voters supported Biden/Harris, while 12% backed Trump/Pence.

However, some pundits, including Dave Wasserman, have already started spreading the narrative that it was the white suburbs that delivered victory for Biden/Harris. Let’s be clear: the majority of white voters once again voted for Trump, in spite of the much-discussed efforts of groups such as the Lincoln Project. It appears that Trump actually gained support from white women.

Third, while the role of Black voters in major cities was absolutely critical, we cannot overlook the power of Black turnout in smaller and midsize cities. There will be many books written about the flipping of Georgia from red to blue, but those books shouldn’t focus exclusively on Atlanta and Savannah; they should have chapters about Macon, Augusta, Savannah, Columbus, Albany and rural counties in-between. In fact, during the five days leading to 3 November, my organization, the Black Voters Matter Fund, brought our “We Got Power” bus tour to each of those cities. During each of those stops, I told those in attendance that Georgia was going to shock the country, and here we are.

Historic Black turnout was not simply a function of Biden/Harris.
It was driven by issues affecting our communities

Fourth, this historic Black turnout was not simply a function of Biden/Harris. It was driven by issues affecting our communities and the ability of local organizers to translate concerns about those issues into electoral power. That is why this election cycle has seen major victories up and down the ballot, including in Brunswick, Georgia, where the district attorney who initially refused to arrest the men who killed Ahmaud Arbery was on the ballot. Thanks to local organizing, she was defeated.

Fifth, and perhaps most importantly, while we celebrate the impact that Black voters have had, we should not lose sight of the fact that this election should not have even been as close as it was if not for voter suppression. The two states that are likely to have recounts, Wisconsin and Georgia, have seen over half a million voters purged within the past year or so. We cannot let our success at increasing turnout hide the urgent need for restoring, and in fact strengthening, the Voting Rights Act.

We must keep these five points in mind even as Georgia is at the center of the US right now. In addition to Georgia’s role in the presidential outcome, it also holds the key to control of the US Senate, with two seats on the ballot and both races requiring runoffs in January to decide. There’s lots of organizing to do, and we’re going to need to pull out a tremendous effort for those seats. We’re ready and galvanized.

Of course, we have mountains yet to climb and marathons yet to run, but we feel a sense of pride and accomplishment that no one will deny us. Black voters have offered this country a reboot, another chance to bend the arc closer to justice. Without us, America wouldn’t be here. Now we regroup and begin to address the formidable challenges the country must face. And in doing so it’s essential that Black leaders are decision-makers and Black communities are involved. As we say, “Can’t stop. Won’t stop.”

Cliff Albright is a co-founder of Black Voters Matter Fund