You Are Here: Home » Blog » Commentaries/Opinions » Cohen’s Claim That Trump Is A Racist Is Hardly the Revelation of the Ages 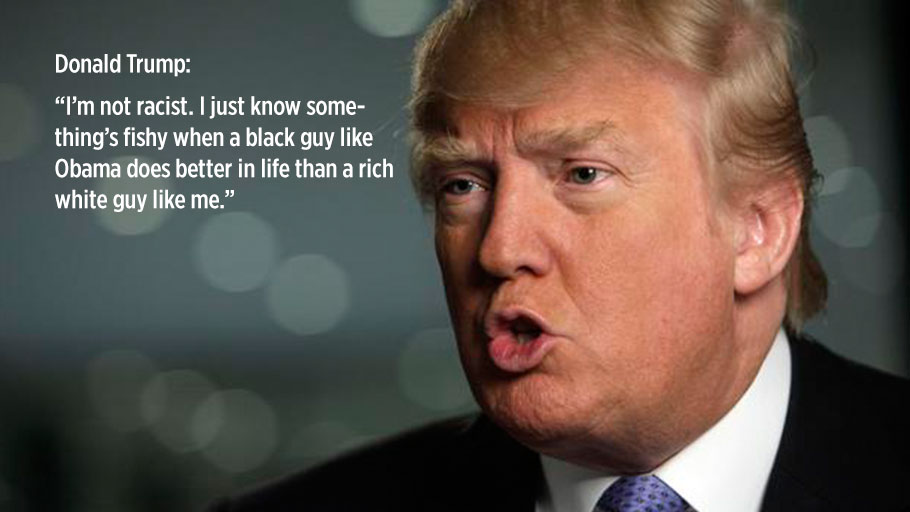 “I told Trump that the rally looked vanilla on television. Trump responded, ‘That’s because black people are too stupid to vote for me.’

“Name one country run by a black person that’s not a shithole,’ and then he added, ‘Name one city.”

“We were going from the airport to the hotel, and we drove through what looked like a rougher neighborhood. Trump made a comment to me, saying that only the blacks could live like this.”

These are choice Trump racial digs at blacks that Trump’s former attorney, and convicted felon, Michael Cohen, claims Trump said to him on various occasions. Cohen hints that this is just the tip of the Trump racial iceberg; meaning that Cohen heard him make many insulting and offensive racial cracks during his tenure with the Trump organization.

If Cohen said that the president is an inveterate racist about any other resident of the White House other than Trump, this would instantly be chalked up to vindictiveness by a former employer on the outs with his former boss. But Cohen is believable precisely because the breath-taking sweep of Trump’s blatant racial pandering has been almost unbelievable.

Cohen is hardly the first Trump former on the outs employee to go public with Trump’s racism. In her tell-all book, Omarosa cited instance after instance where Trump made racist cracks about blacks and immigrants with unabashed delight. Legions of others who dealt with Trump have pretty much said the same thing. That’s that Trump privately will let it fly about his contempt for blacks.

The fascinating thing about this is just how hard Trump has worked to ensure that his racism has become almost a point of pride. Trump’s mighty effort to sprint to the bottom on race is well known. There’s the endless charges and government discrimination lawsuits against his realty outfit for blatantly excluding African-American tenants from his New York rentals in the 1970s, his manic one-man crusade to plop the Central Park Five in the gas chamber, the relentless birther smearing of President Obama, and his rip of Obama for the Baltimore riots. Trump piled on this sordid race baiting history with his steady barrage of border line racially inflammatory cracks, digs, and jibes at Hispanics, Muslims and immigrants.

This is a case of more than just a guy who’s a product of old-school, in your face personal disdain for blacks and minorities. Race has been a major public and political signature trademark for Trump to climb to the political top. He has never made any secret that the vote that he banked on as his ticket to the White House were those who harbor the same racial animus toward blacks, minorities, immigrants and Muslims as himself.

This flies in the face of what GOP presidents and presidential contenders Nixon, even Reagan, and Bush Sr. and especially W. Bush did. They took great pains to give the appearance that they were not overt racists, and that naked racism was not part of their appeal. This included highly orchestrated, stage managed, photo-ops with black celebrities and sports figures, a handful of key black pitch men and women on the campaign trail with them, and in the case of Bush loading up the 2000 Republican convention with a pack of show piece, African-Americans to provide entertainment and perfunctory speeches. Black Voices email.

Trump in carving out his cherished spot as racial panderer also borrowed heavily from the GOP’s old racial playbook. This is the GOP’s standard use of code words and attack points such as tax and spend Democrats, out of control, wasteful government, and welfare freeloaders. This embeds the notion that minorities, and especially blacks, unfairly scam the system with the active connivance of Democrats and at the expense of hard-working, overtaxed blue-collar and middle-class whites. The reverse side of this is to continually finger point civil rights leaders and Democrats as the perpetual players of the race card whenever they voice criticism of the racist digs, taunts, and hectoring of former president Obama.

Trump flipped the script on race again when he lambasted filmmaker Spike Lee’s Oscar winning acceptance speech as racist. He’ll work both sides of the racial street even harder against the 2020 Democratic presidential contenders. He’ll use the same racial stock racial code words, innuendoes and hints against them. Then he will pivot and call them racist for allegedly pandering to blacks, Hispanics and immigrants.

Trump’s aim is to reassure his angry white base that he’ll continue to be their solid firewall in the Oval Office against entitlement happy Democrats, and supposed government hand out leeching minorities. Cohen’s charge then that Trump is a racist is not a badge of embarrassment, but a badge of pride for Trump. He can brand Cohen a felon and a liar all he wants, but the racist label that Cohen tagged him with is one that Trump will wear proudly all the way up to Election Day again.

Earl Ofari Hutchinson is an author and political analyst. He is the author of The Russia Probe: What Did Trump Know, And When Did He Know It? (Middle Passage Press) https://www.amazon.com/dp/B07L46G65X He is a weekly co-host of the Al Sharpton Show on Radio One. He is the host of the weekly Hutchinson Report on KPFK 90.7 FM Los Angeles and the Pacifica Network.