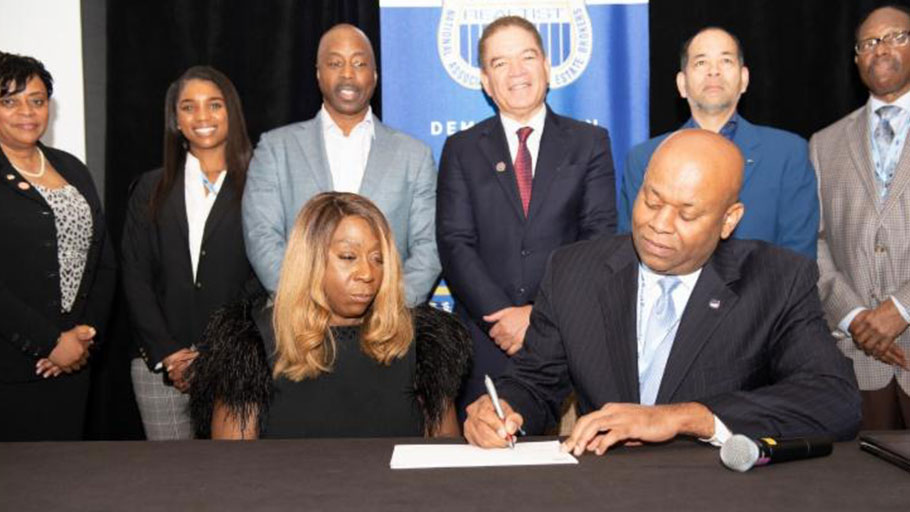 MIAMI, Florida – At its recent Mid-Winter Conference in Miami, FL, the National Association of Real Estate Brokers (NAREB) signed a groundbreaking Memorandum of Understanding (MOU) with United Security Financial (USF), a minority-owned mortgage company headquartered in Salt Lake City, Utah to make down payment assistance more broadly available to Black American home buyers. The two organizations announced that they have obtained a commitment of $50 millionin down payment assistance funds from LBC Funding, LLC to assist in the expansion of homeownership for low-to-moderate income purchasers.

“NAREB welcomes the collaboration with United Security Financial. Latest official homeownership rates issued by the U.S. Census Bureau, report that Black homeownership at 41.7% lagging far behind the Non-Hispanic White homeownership rate of 73.1%. That nearly 30% gap represents a significant loss of economic security and wealth building opportunity for Black Americans. NAREB’s goal is to build Black wealth through homeownership. That’s why NAREB continues to forge ahead with its aggressive 2 Million New Black Homeowners in 5 Years (2Mn5) program,” said Jeffrey Hicks, president of the National Association of Real Estate Brokers (NAREB) founded 72 years ago to ensure “Democracy in Housing” for Black Americans.

Lois Johnson, chief executive officer of United Security Financial, the company that is managing the fund that will provide the $50 million commitment, explained why USF had chosen to partner with NAREB. She stated, “Since 1947, NAREB has been at the forefront of an on-going effort to secure homeownership for people of color. We, at USF, while serving all citizens, regardless of race, creed or sex, are excited to support equality in housing. NAREB’s mission is aligned with our corporate values. This MOU creates a win-win for both of our organizations.”

The down payment assistance funds will be used in conjunction with first mortgage home purchase loans made by USF to NAREB Realists’ clients over the next 12 months. The commitment represents an important step in meeting the 2Mn5 goal. “The new partnership with USF allows Black Americans to overcome one less barrier in their quest to become home owners,” Hicks added.

The National Association of Real Estate Brokers (NAREB) was formed in 1947 to secure the right to equal housing opportunities regardless of race, creed or color. NAREB has advocated for legislation and supported or instigated legal challenges that ensure fair housing, sustainable homeownership, and access to credit for Black Americans. At the same time, NAREB advocates for and promotes access to business opportunity for Black real estate professionals in all of the real estate disciplines. NAREB annually publishes The State of Housing in Black America report. www.nareb.com

United Security Financial Corporation (USF) is a full-service mortgage banking firm that has been in business since December 1988. www.usfwholesale.net