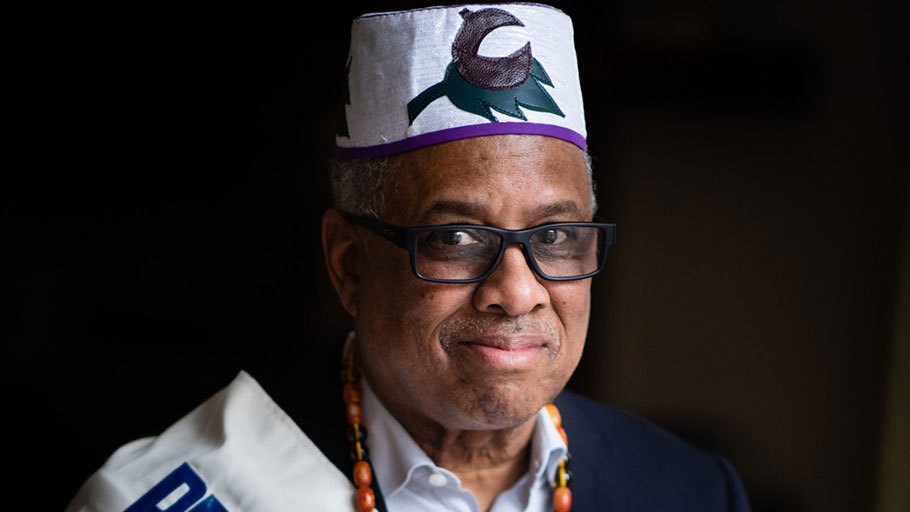 ‘I’m a prince’: After years of searching for family history, a pastor discovers royal ties to Africa

You Are Here: Home » Blog » Editors' Choice » ‘I’m a prince’: After years of searching for family history, a pastor discovers royal ties to Africa

Jay Speights, an interfaith leader who lives in Rockville, Md., made an accidental discovery last year: He is an African prince. (Sarah L. Voisin/The Washington Post)

It was about 4 a.m. when his phone buzzed with a message from far away. He read it once, twice, three times before he woke his sleeping wife to tell her the news.

“I’m a prince,” he whispered as she blinked herself awake. “A prince.”

Jay Speights, an interfaith pastor from Rockville, Md., could hardly believe the words as he formed them in his mouth. Him? A prince? He grew up in New Jersey. He lives in an apartment. He does not even own a car.

Speights, 66, had spent much of his life wondering about his forebears, probing public records until the trail went cold. Like many black Americans who are descendants of slaves, Speights could find little written evidence of his family’s history. In April, he turned to a DNA test from Ancestry in the hope that something, somewhere might turn up.

He was identified as the distant cousin of a man named Houanlokonon Deka — a descendant of a royal line in Benin, a small nation that once housed West Africa’s biggest slave port. At the urging of a friend, he ran his DNA data through another database that looks for matches between African Americans and Africans who have taken such tests. 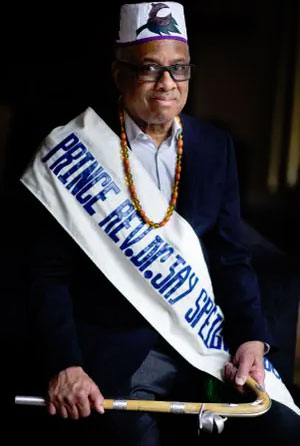 Within minutes of entering his information into the database, Speights said, the website lit up with a result. It said “royal DNA.”

Four hundred years after the first enslaved Africans arrived in colonial Virginia, Speights is grappling with his newfound identity as the descendant of slaves and the African kings who put them in chains. His internal reckoning serves as a conduit for discussion in the United States over the impact of slavery and racism, and the struggle to find a path forward as a nation of former enslavers and the enslaved.

“The history of the Atlantic slave trade, colonialism and enslavement are really violent histories that led to families being torn apart, histories and cultures being stolen from many individuals and huge harms to African Americans,” said Deborah Bolnick, an anthropological geneticist at the University of Connecticut. “DNA testing has been used as a tool to help them start to recover that loss.”

The king from whom Speights is probably descended was one of several who captured and sold slaves — typically members of rival tribes or captives of war — to European merchants, who then loaded them onto ships bound for Brazil, Haiti and the United States.

Speights said the more he learned, the more questions he had. But he was not sure how to contact a man who could be his sixth or eighth cousin and lived an ocean away.

A few months later, a Vodun priest from Benin visited the New Seminary in New York, where Speights serves as executive director. During the visit, Speights said, he brought up his DNA discovery. One of the men in the Benin contingent perked up at the mention of his ancestral family name, Deka.

“I know your king,” the man said. “Here is his phone number.”

The king of Allada hung up the first time Speights called.

“You don’t cold-call a king, I guess,” Speights said.

The second time, King Kpodegbe Toyi Djigla passed the phone to his English-speaking wife, Queen Djehami Kpodegbe Kwin-Epo. Together, the couple serve as the traditional leaders of Allada, a state in central Benin and the historical home of the Allada kingdom.

The queen asked Speights to see photos of his parents and grandparents. She inquired about his motivations — what did he want from them?

His response was simple: Answers.

“You are a descendant of King Deka, 9th King of Allada who ruled from 1746 to 1765,” she wrote in a message over WhatsApp. “We will be delighted to welcome you to your home, dear Prince.” 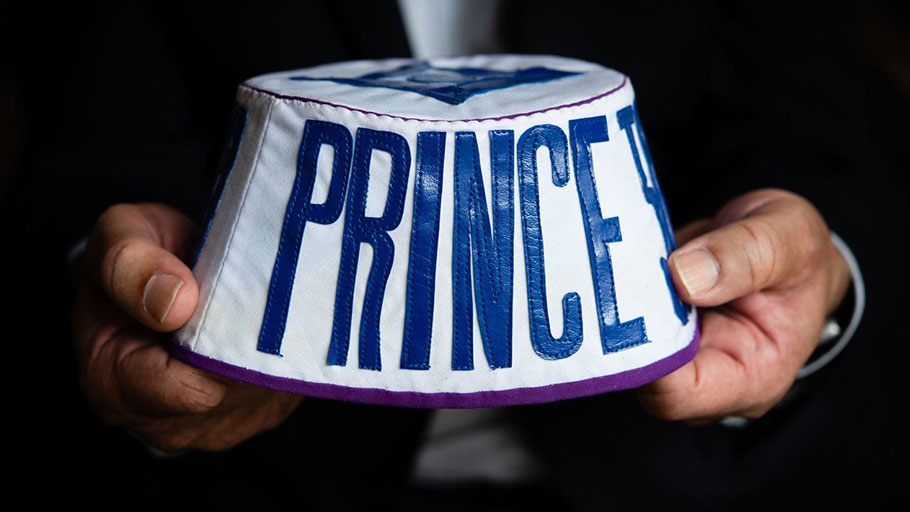 After a DNA test revealed ties to the Allada kingdom in Benin, Jay Speights contacted its king. Speights had spent much of his life wondering about his forebears. (Sarah L. Voisin/The Washington Post)

Last month, Speights boarded a plane in Virginia and landed in Benin 36 hours later. The family pictures he had sent to the queen were plastered on big blue posters hung throughout the airport.

“Welcome to the kingdom of Allada, land of your ancestors,” the posters said in French.

As he stepped outside, Speights said, he saw what looked like a festival, hundreds of people dancing and playing instruments and singing. It took him several minutes to realize it was a welcome party — for him.

“I thought, ‘Wow, this is serious,’” Speights said. “I thought I was going to go, hang out with the family, do some sightseeing. But this was something else.”

He spent the next week in what he calls “prince school,” learning local customs and visiting various sites and dignitaries. He was enthroned by the king, given white lace robes to signal he is a holy man, and several crowns. At night, an armed guard kept watch outside his hotel door. During the day, local journalists followed him around with cameras. 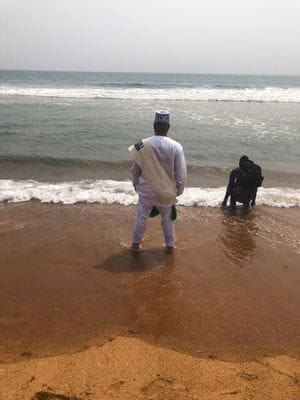 Jay Speights stands in the surf of the Bight of Benin, where slave ships departed into the Atlantic Ocean toward the Americas. (Family photo)

Speights is the first member of the Allada kingdom and the Deka clan to return to Benin from the African diaspora, he said.

But he is not the first royal descendant to be identified in the United States, said Benjamin Agon, the attache for cultural affairs at the Embassy of Benin in Washington. As DNA tests have grown more popular, Americans claiming Beninese lineage have begun to show an increased interest in the country, Agon said. Tourism has grown as a result.
For black Americans like Speights, answers to DNA tests can provide a sense of history that was erased by the transatlantic slave trade.

Popular commercial DNA tests such as those from Ancestry and 23andMe typically offer results based in broad geographic regions. Other organizations, including DNA Tested African Descendants — the service Speights used — have stepped in to fill gaps and connect individuals directly.

Despite scientific advances, geneticists and anthropologists caution that drawing conclusive answers from such tests can be tricky and warn users against re-forming their sense of identity around what might be little more than an educated guess. Yet, American test-takers and those from the countries identified in their DNA matches have hurried to embrace one another.

The number of newfound descendants has reached such a critical mass that the Beninese Embassy is planning to host a reception, where American descendants of the tribes and kingdoms of Benin can meet and be “introduced to the community,” Agon said.

“After they are accepted by the royal family, many of them are given a mission to accomplish,” he said. “Once they go back to their other country, they have to do their best to find other people that are just like them.”

How the royal ancestors of Speights and others ended up in the United States remains somewhat of a mystery.

Benin’s hesitance to fully acknowledge its role in the transatlantic slave trade has long been fraught with tension. When pressed, Speights said his relatives in Benin told him members of the royal family would not have sold their own people to slave merchants, but they could not explain how his ancestors wound up aboard a slave ship.

“No matter who did what, we all ended up the same way,” he said. “In chains.”

In Benin, a tree once stood near the city’s historic slave port from which more than a million people were shipped to the Americas. Before they departed, West African men and women would walk around the trunk up to nine times to shed the life they were leaving behind and accept the bondage into which they had been sold.

It was called the “tree of forgetting.” Today, the tree is gone, but a historic marker remains.

As his newfound relatives watched, Speights walked around the marker nine times in reverse.

He was angry, he said. And hurt.

When he finished his walk, he felt something else, too. A sense of healing. 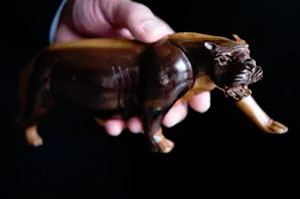 Speights holds a panther, which was a gift from the king and a family symbol. (Sarah L. Voisin/The Washington Post)

“I thought about how much they survived — and what it means for me to return to this place, to restore our family,” he said. “I can’t tell you what that felt like in my heart.”

Now, Speights said, he plans to go back to Benin every year. He wants to bring his brother and daughters and wife.

He has accepted “princely duties,” which include promoting the kingdom and helping bring clean water and electricity to the community where his relatives live.

He will continue his search for the missing years in his family history. He is working to facilitate an interfaith dialogue on the evils of slavery and help other members of royal families in Benin conduct DNA tests.

Before he left Benin, Speights said, the king gave him a new name: Videkon Deka.

It means the child who came back.