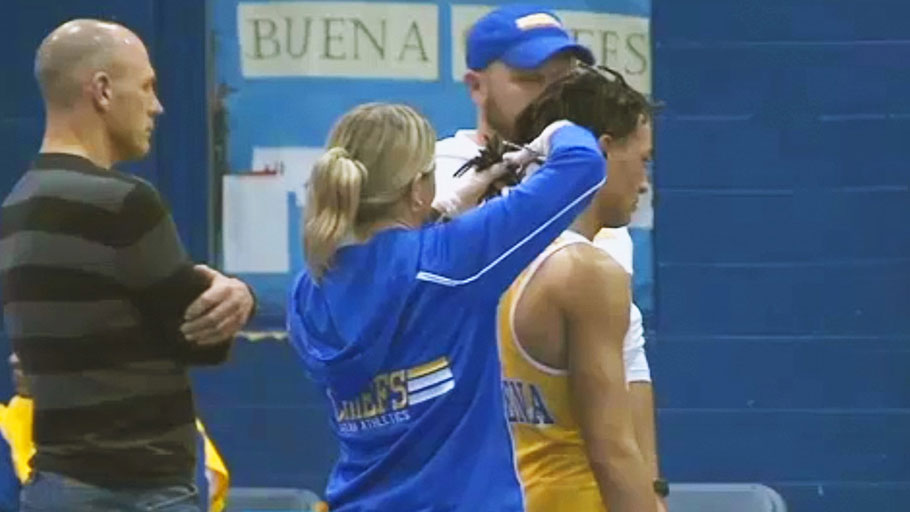 Hair Discrimination Is Alive And Well

By Dr. Julianne MalveauxFebruary 10, 2020No Comments

Andrew Johnson, a high school wrestler, was forced to submit to the humiliating act of having his dreadlocks shorn or have his New Jersey team forfeit their match to the opposing team. A gleeful white woman seemed too pleased to invade the young man’s person, and his team won, but at what price? When this happened in December of 2018, there was a national outcry, and the referee was suspended.

A year later, DeAndre Arnold, a senior at Barbers Hill High School in Mont Belvieu, Texas, was told that he would not be able to graduate unless he cut his hair. He’s been growing his dreads for more than five years, often wearing them in a bun so that they did not violate the school rule that hair could not touch the collar. This is part of a pattern of policing Black hair in our nation’s high schools and workplaces. And these dress codes are an attack on Black people, designed by white people and for white people. Hostility toward natural hair, locs and twists is really unvarnished hostility toward Blackness and its manifestation. It is an insistence that Black people conform to Eurocentric norms.

Andrew Johnson and DeAndre Arnold made headlines, but many cases do not. Often, the “code” is subtle, and the backlash painful and undeniable, but never spoken. So many women are told that their hair is “too wild” or “ungroomed”, as if bone straight hair is the only way to wear it. And perhaps it is not said so much as hinted. And Black women (and men) have the choice of playing the game or stalling their careers. This doesn’t happen so much on the coasts, in California, New York and the District of Columbia. But it happens enough that activists have worked to outlaw hair discrimination.

On July 3, 2019, California became the first in the nation to outlaw discriminating against natural hair. The CROWN Act, or Create a Respectful and Open Workplace for Natural Hair was signed into law by Governor Gavin Newsom. A few days later, New York State passed a similar law, as did New Jersey. A few cities and counties, like Cincinnati, OH and Montgomery County, Maryland, have also followed suit. A dozen or so other states and municipalities have explored, and even introduced legislation that prohibits discrimination against those who wear natural hair, braids, locs, or twists. Despite legislation, hair discrimination is alive and well.

The text of the California legislation explores the history of hair discrimination. It reads in part, “The history of our nation is riddled with laws and societal norms that equated ‘blackness,’ and the associated physical traits, for example, dark skin, kinky and curly hair to a badge of inferiority, sometimes subject to separate and unequal treatment.” The bill goes on to say, “Professionalism was, and still is, closely linked to European features and mannerisms, which entails that those who do not naturally fall into Eurocentric norms must alter their appearances, sometimes drastically and permanently, in order to be deemed professional.”

The fact that a diversity of hairstyles needs to be addressed through legislation speaks to the intransigence of white supremacy, the need white supremacists have to require Black people to conform to their standards. Even as the population of people of color grows in our nation, white supremacists are holding on, strong, to their racist norms. Some of them don’t even think they are racists. They are, indeed, “nice” people. They speak of neatness, wildness and their own discomfort with “different” hair. They think that folks should go through having their hair fried to make other people comfortable.

I really don’t care how people wear their hair. It, truly, is a matter of choice. And hair does not have to be political. But hair choices must be respected and discrimination against natural hair, braids, twists, and locs cannot be tolerated. Intolerance about natural hair is an intolerance against Black people. It is, at best, unacceptable.

Kudos to California State Senator Holly Mitchell for starting the ball rolling. Congratulations to those who worked with her to pass this important legislation. And shout out to the others who have embraced her legislation by introducing it in other states. Hair discrimination is not the most egregious injustice that Black people experience, but it is an injustice nonetheless. Just ask DeAndre Arnold, who won’t be able to march with his peer graduates because he wears dreads, or the wrestler, Andrew Johnson, whose locs were shorn because a racist referee had neither intelligence nor tolerance.