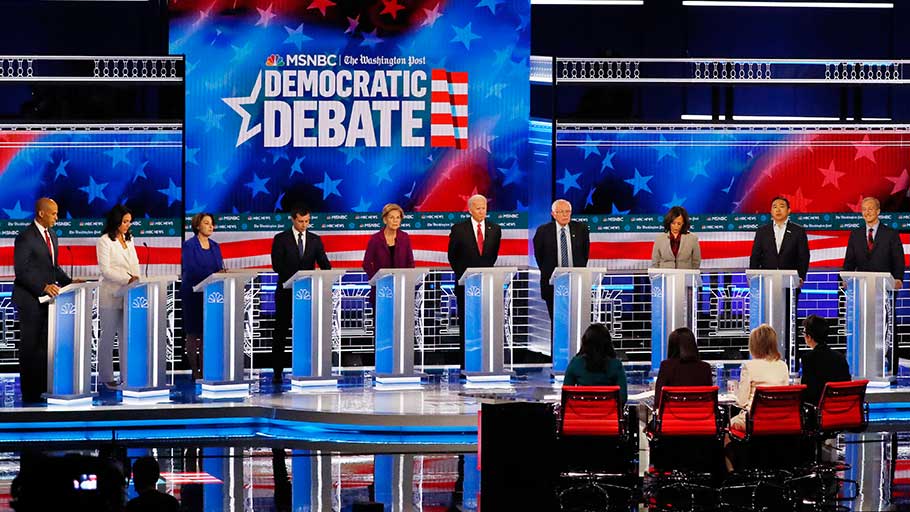 By Dr. Julianne MalveauxNovember 25, 2019No Comments

The November 20th Democratic presidential debate took on a much different tone than the previous debates. I’m not sure if it was because the panel of moderators was all women – NBC’s Andrea Mitchell and Kristen Welker, MSNBC’s Rachel Maddow, and the Washington Post’s Ashley Parker. Or perhaps it was because the candidates finally got over attacking each other (mostly) and instead decided to be themselves and embrace their identities. Maybe they hoped to engage more viewers with a substantive focus on the issues. And since the impeachment hearings loom large (closing only minutes before the debate began), each of the candidates had an opportunity to opine on impeachment.

Hillary Clinton broke the glass ceiling in both 2008 and 2016, first as a strong competitor to President Barack Obama in the 2008 primaries, then as the first woman to gain the nomination of a major party. Now, there are four women –Senators Kamala Harris (CA), Amy Klobuchar (MN), and Elizabeth Warren (MA) along with Hawaii Congresswoman Tulsi Gabbard. And the women highlighted their gender in their remarks, with Kamala Harris reminding people that Black women are a backbone of the Democratic Party, and Black women are all too often ignored. Amy Klobuchar got an amusing one-liner off when she said, “If you think a woman can’t beat Trump, Nancy Pelosi does it every day.” Her point about the double standard women face in politics was an important point to make. Hillary faced it, and all of the Democratic women running for President face it. The double standard is especially acute because the current President of the United States has no problem denigrating women, especially Black women. To be sure, 45 denigrates anyone who disagrees with him, but women take the brunt of his attacks.

Andrea Mitchell, NBC’s Foreign Affairs correspondent, was the right one to ask the candidates about foreign policy, and here is where Congresswoman Tulsi Gabbard shone. Citing her background as a veteran, she was knowledgeable both about foreign policy and environmental justice. But Gabbard seems to enjoy playing the role of attack dog against her fellow Democrats, including Kamala Harris. Bernie Sanders had it right when he said, “We cannot simply be consumed by Donald Trump because if we are, you know what? We’re going to lose the election.” Most of the other candidates concurred, and they attacked 45 more than they attacked each other.

While this column focuses on women, the men had their moments as well. It was poignant when Senator Corey Booker (NJ) shouted out Congressman John Lewis (GA) and acknowledged his service to the nation. Candidate Tom Steyer talked about the role of money in politics, and also spoke about a “climate crisis.” Biden was Biden, and Bernie was Bernie, delivering performances that were similar to their performances in the other debates. I am intrigued by Andrew Yang, whose unlikely candidacy has shown more sticking power than the campaigns of folk like New York Mayor Bill de Blassio and former Texas Congressman Beto O’Rourke. He has also qualified for the debate stage in November while former HUD Secretary Julian Castro (TX) has not.

A generation ago, both Presidential debates and Congressional hearings would be dominated by grey-suit wearing white men. Now, the fifth debate was not only moderated by a coterie of women, but there were four women, nearly half of those who qualified, on the stage. Similarly, during the impeachment hearings, women witnesses, especially former US Ambassador to Ukraine, Marie Yovanovitch, Jennifer Williams, and Fiona Hill, held their own in the face of hostile questioning. Their extremely competent performance was as striking as their presence. Again, a generation ago, foreign policy was the purview of white men. While the foreign policy arena (or presidential races) are hardly equal, the presence of women foreign policy experts represents progress.

Women showed up and showed out both during the impeachment hearings and in the most recent Presidential debate. This last debate was wide-ranging, and it included “kitchen table” issues like paid family leave, Medicare for All (or for all who want it), and more. The inclusion of issues like family leave in a Presidential debate is probably attributable to the fact that women were both moderators and candidates. It would be fantastic and also meaningful, however, if one of the debates could focus on income inequality and poverty.