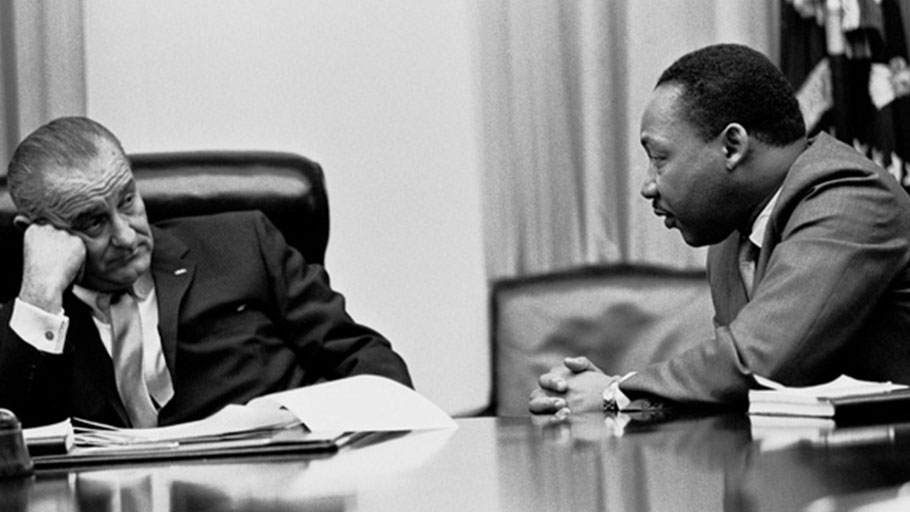 From “War on Crime” to War on the Black Community

You Are Here: Home » Blog » Commentaries/Opinions » From “War on Crime” to War on the Black Community

In his televised speech following five days of civil unrest in Detroit during the summer of 1967, President Lyndon Johnson announced the creation of the Kerner Commission to evaluate the uprisings there and in other cities, and to prescribe policies to suppress future disorder. The American public also demanded insight into why cities burned and what drove citizens to collective violence. The mass-market paperback edition of the Kerner report quickly became a bestseller when it was released in 1968. Part exposé of the so-called riots, part history of American racism, and part synthesis of postwar social-scientific theory, the commission’s critical perspective on urban violence and proposed solutions to the problem of inequality still resonate today. Public figures continue to laud the commission’s emphasis on the role of racial discrimination in perpetuating poverty and inequality, citing its unpursued policy recommendations as an alternative path worth revisiting in the mass incarceration society that defines America a half century later.

Yet despite the fact that the Kerner Commission received more public attention than any other presidential task force in the twentieth century, it lacked the long-term legislative and policy impact of its predecessor, the Crime Commission. Officially the National Commission on Law Enforcement and Administration of Justice, the Crime Commission was established on on July 23, 1965—just four months after Johnson had called for the “War on Crime.” Attorney General Nicholas Katzenbach would chair the group of experts from the law enforcement, academic, civil rights, and corporate worlds, who shared moderate political orientations and were deeply committed to preserving order. The president expected the nineteen-member commission to carry out the most comprehensive investigation of crime ever undertaken. Further still, the Crime Commission was charged with designing a rational, well-researched national law enforcement program that would be palatable to Congress. Among the Crime Commission’s many recommendations that continue to shape Americans’ interactions with law enforcement, the national emergency phone number the commission conceived became the basis for the 911 system.

Johnson’s War on Crime began from the assumption that black community pathology caused poverty and crime.

Unlike the more prudent assignment the Kerner Commission received, from the outset President Johnson encouraged Crime Commission members to “be daring and creative and revolutionary” in their recommendations. And in contrast to the relative distance Johnson maintained from the Kerner Commission—receiving clandestine updates but avoiding direct involvement—he favored an intimate relationship with Katzenbach and his team. Throughout the fifteen-month investigation, the attorney general frequently reported the Crime Commission’s findings to the president, as members evaluated experimental law enforcement programs in major cities, assessed census data, and conducted cutting-edge ethnographic research on the problem of crime and its root causes. Although Johnson later refused to publically comment on the Kerner Commission’s report, he considered the Crime Commission’s final report, called The Challenge of Crime in a Free Society, “one of the major documents of our time” and cited it in his 1967 State of the Union address.

The Challenge of Crime in a Free Society laid the groundwork for a revolution in American law enforcement. With its impressive research and detailed proposals, the report made concrete the president’s relatively abstract War on Crime, helping the administration build a critical mass of support among political and economic elites across the ideological spectrum. In 340 pages, the Crime Commission put forth 200 recommendations regarding policing, the courts, corrections, juvenile delinquency, organized crime, and narcotics and drug abuse. Among its most critical points, it recommended the creation of criminal justice planning agencies at all levels of government, as well as a major new federal agency that would enable the attorney general and the Department of Justice to coordinate the law enforcement bureaucracy and guide the War on Crime. It also encouraged the federal government to invest in the professionalization and modernization of police departments, both by improving the weaponry available to law enforcement and by standardizing crime-reporting methods.

Perhaps most importantly, the Crime Commission advocated for a long-range federal plan that would reconstruct urban social institutions by integrating law enforcement into existing government agencies. Linking crime control and antipoverty policies in new and innovative ways, the commission urged federal policymakers to support community-based crime control institutions staffed by social workers, municipal employees, and law enforcement officers. These agencies would operate outside the formal criminal justice system and provide social welfare services to children and teenagers who had already come into contact with police, as well as youth who were seen by policymakers and officials as “potentially delinquent.” Together these recommendations became the basis of the Omnibus Crime Control and Safe Streets Act of 1968—the capstone of Johnson’s Great Society. The legislation created the Law Enforcement Assistance Administration within the Department of Justice and allocated an unprecedented $300 million of federal money for investment in state and local law enforcement.

In line with the larger objectives of the Johnson administration, the Crime Commission’s report defended the Great Society’s effort to address the structural factors that contributed to the nation’s crime problem. “Warring on poverty, inadequate housing and unemployment, is warring on crime,” members wrote. “A civil rights law is a law against crime. . . . More broadly and more importantly every effort to improve life in America’s ‘inner cities’ is an effort against crime.” Much like the Kerner Commission, the Crime Commission trumpeted the initiatives of the War on Poverty, including job training, housing, and early childhood education programs. It also suggested that federal policymakers actively work to reduce racial segregation, provide a guaranteed income, and reform welfare regulations to encourage both parents to remain in low-income households.

In its deliberations, the Crime Commission discussed the socioeconomic roots of crime. Despite this, conservative pressure from within and without resulted in a set of recommendations that mostly excluded remedies related to poverty, race, and class (the Kerner Commission would go on to take up that ambitious task). Instead the Crime Commission supported a punitive transformation of urban social programs, based largely on the principle that saturating a targeted area with surveillance equipment and police officers performing both social welfare and crime control functions would effectively restore order. The process of implementing this strategy from the late 1960s onward eventually criminalized generations of low-income black Americans.

Accepting widely held notions about race and criminality that undergirded both liberal and conservative responses to the plight of black citizens, the Kerner Commission went on to endorse the ongoing merger of social welfare and crime control programs as the hallmark of federal urban policy. Even as members of both commissions mentioned racial discrimination and inequality as factors contributing to crime and disorder, they took for granted the guiding principle of domestic urban policy in the 1960s: that black community pathology caused poverty and crime. These racist assumptions influenced the “battle plan” that Crime Commission members developed for the administration, which focused explicitly on ways to improve federal, state, and local governments’ surveillance of and capacity to patrol black urban communities.

In the final analysis, beneath its liberal rhetoric the Kerner Commission supported the massive War on Crime that targeted low-income African Americans. Backed by the Kerner Commission, the Crime Commission’s blueprint for national law enforcement set the course for the escalation of the War on Crime under subsequent administrations. As the proposals of The Challenge of Crime in a Free Society unfolded on the ground, neighborhood police stations were installed inside public housing projects in the very spaces vacated by community action programs. Social welfare measures that provided education and training opportunities to poor people were increasingly replaced with police department programs that provided entertainment and recreation. Over time funding for the War on Poverty’s equal opportunity and community action programs was diverted to crime control concerns. We celebrate the Kerner Commission and its lofty goals, and rightly so. But unfortunately Americans—and especially low-income black citizens—continue to live in the shadow of the Crime Commission. One can only imagine what the United States might look like today had the Kerner Commission had the same kind of lasting legacy as its more punitive forerunner.

This is the third part of an ongoing discussion about the significance of the Kerner report and the urban race riots of the 1960s. The first installment, which introduces the Kerner report, is Julian E. Zelizer’s “Fifty Years Ago, the Government Said Black Lives Matter.”The second part is Daniel Geary’s “What the Kerner Report Got Wrong about Policing.”

Elizabeth Hinton is Assistant Professor of History and of African and African American Studies at Harvard University. She is the author of From the War on Poverty to the War on Crime: The Making of Mass Incarceration in America.