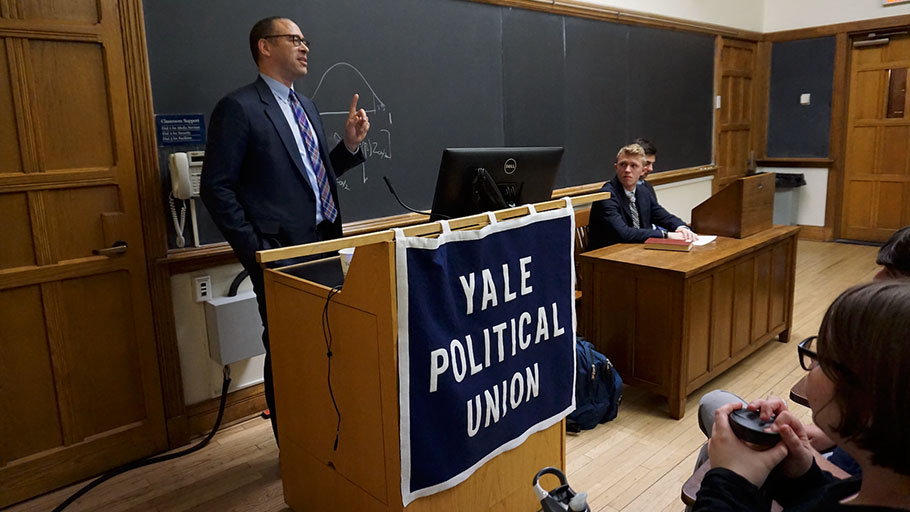 In his first visit to Yale since leaving to become provost of Northwestern University, beloved former Dean of Yale College Jonathan Holloway gave the opening remarks on Thursday at a Yale Political Union debate on whether the U.S. government should pay reparations to the descendants of slaves.

Addressing a packed crowd in William L. Harkness Hall, Holloway, the former chair of Yale’s African American Studies Department argued not for cash transfers — which he called impractical — but for reparations in the form of structured federal programs designed to provide African Americans with greater opportunity in housing, health care and education. His words were met with cheers from many of the roughly 120 students in the audience.

“I’m impressed, as always, at the ability of those of you who speak with passion, even when you are wrong,” Holloway said at the end of debate. “I think it’s a special gift that you have to speak with passion and clear arguments about your opinions on this matter. For that, I thank you for a welcome home.”

Holloway started the speech by solemnly chanting the epitaph on the headstone of an African American slave from the 18th century — “God wills us free. Man wills us slave. I will as God wills, God’s will be done.” Holloway explained that he has kept the headstone with him for much of his life, first at his childhood home, then in his offices in New Haven and now in Evanston, Illinois.

Holloway emphasized the benefits of affirmative action in college admissions and praised Georgetown University for its policy of giving the same preferential treatment to descendants of slaves that it gives to children of alumni. He said he understood why some may find affirmative action unfair. But the world has never been fair, he stressed, and reparations are warranted.

“The real work for a place at Yale is not about the name on the building,” Holloway said. “It’s about a deep and substantive commitment to being honest about power, structural systems of privilege and their perpetuation.”

Following Holloway’s speech, members of the YPU argued for and against reparations. At one point, Holloway raised a question and asked a student to consider adjusting his arguments to be more “historically nuanced.”

In an interview with the News following the event, Holloway said he finds his new job as the provost deeply interesting. Still, he admitted he has been “totally missing it here.”

“I miss these sorts of events,” Holloway said. “The students are, for me, the part that always makes Yale special, so being invited back by students to come and talk to students is — you need to say yes to that sort of thing.”

Aviva Rabin-Court ’19 said Holloway articulated his points well and added that it was smart that he opened the debate by bringing other methods of achieving racial equality, besides cash transfers, into the conversation.

Daniel Zhao ’21 said Holloway’s speech reminded him of how “cool” the former dean was when Zhao saw him speak during Bulldog Days. Mojique Tyler ’19 said Holloway showed his scholarly side at the debate, adding that they respect Holloway’s scholarship more than the work he did as dean.

Before serving as dean of Yale College, Holloway served as master of Calhoun College from 2005–2014.