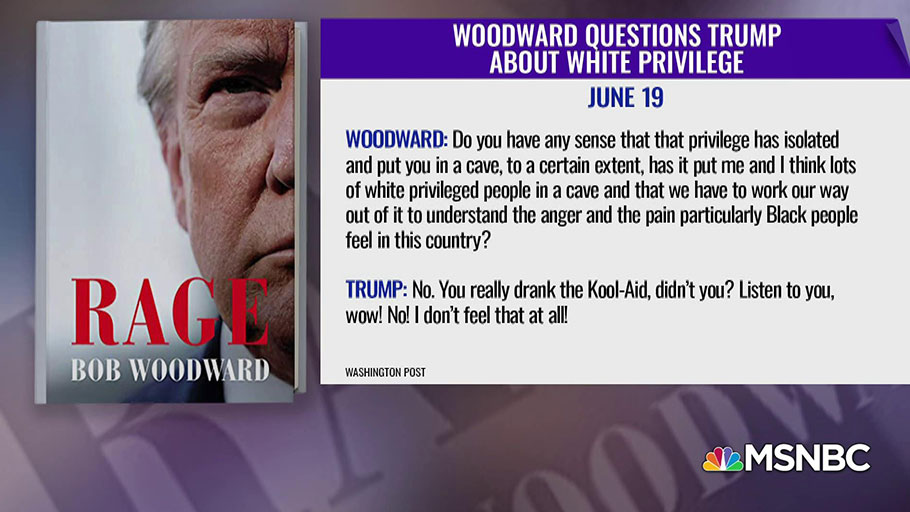 Robert Woodward certainly couldn’t have been shocked at Trump’s answer to his very loaded question. The question was whether he could understand any of the racial pain that African Americans feel. Trump stood the question on its head and accused Woodward of “drinking the Kool Aid.” Translated: Why should he or any other white guy like him feel any guilt, let alone empathy, at the racial suffering of African Americans. After all, unstated by Trump, but implied was that whites didn’t create that pain, indeed if there is any pain to feel.

This was another neat set piece in Trump’s blatant assault on race as his ticket back to the White House. There are three blatant parts to his ploy. One is the war on Black Lives Matter. He’s made them the whipping group for everything supposedly wrong with knocking the police for abuse, misconduct, and violence. This part to his strategy has ensured him the love, devotion, and most importantly the enthusiastic endorsement of some of the top cop unions around. Their endorsement gives him the solid cover he needs to recycle the Nixon law and order scam as a campaign wedge issue to batter Biden and the Democrats as soft on alleged anarchists, looters, and store burners.

While the law and order shout worked for Nixon, judging from some polls, the results are mixed for Trump. Many fearful voters like his pitch. But many others see it for what it is, a crass, cynical, cheap appeal to fear and emotionalism. They can read the surveys that show that almost all Black Lives Matter and other police abuse protests have been peaceful and lawful.

The other part of Trump’s get back in the White House race bait plan is to question the very notion that African Americans have suffered any sort of racial handicaps in this day and age. In fact, such talk claims Trump, and his backers, is overblown, self-serving, and basically a lie. Trump drives this home with his constant talk about all the alleged prosperity and economic benefits Blacks have gotten. He doubles down on this by trotting out  his well-positioned pack of Black preachers, athletes, celebrities, and GOP henchmen and women  to  smother Trump  with assurances that he is doing  a fabulous job for Blacks and that all the talk that he is a world class race baiter is just worn propaganda talking points from mean-spirited Democrats. They’ll be even shriller and more visible in the closing weeks of the campaign pitching the racial virtues of Trumpism, and the alleged evildoing of the Democrats and especially Biden toward Blacks.

The most despicable and dangerous part of Trump’s race baiting strategy is he seeks to sow even deeper discord and divisions between Blacks and whites.  The near textbook example was the NFL player protest by taking a knee during the playing of the national anthem. Trump rails at this every chance he gets. The NFL owners finally stopped kowtowing to him, and the Black players now loudly speak out for racial justice and against police violence. Yet, his baiting has paid a small dividend. Some fans booed the Kansas City Chiefs and Houston Texans players at their NFL opening night game for displaying racial unity before the start of the game.  There was also a big plunge in the TV viewer ratings for the game. Some inferred the drop was due to fan disgust over the NFL’s supposed tilt toward Black Lives Matter.

Some polls also give a clue why Trump shamelessly race baits every chance he gets. They repeatedly show that the great majority of Trump supporters still do not see racial bias as a major problem. A significant number go further and bait, taunt, and demean those who protest police abuse. This was almost certainly the case with the boos directed at the NFL players on opening night.

There’s more. Numerous polls have found that GOP voters are far more likely to say that whites, not Blacks and Hispanics, are more likely to face racial discrimination. No matter how many studies confirm rampant discrimination against Blacks in hiring and promotions, gaping racial disparities in the criminal justice system, education, and health care, and the number of police killings of Blacks, GOP voters are unshakeable in their belief that whites are the prime victims of discrimination.

The message that race baiting won’t offend many has never been lost on Trump. In the White House, it’s been more of the same. A racist dig, or tweet, a Willie Horton reprise, with the not-so subtle scare of Black crime coming to the suburbs by sending in federal marshals to Chicago. This guarantees lots of headline coverage, public chatter, and more distraction.

Trump’s fire back response to Woodward that he was drinking the Kool Aid by  daring to suggest he should feel empathy for Blacks was  perfectly calibrated to tug at the emotional strings of the GOP’s core constituency—white conservative, rural, and blue-collar workers. There’s some evidence that it does, and that’s more than enough reason why Trump would never drink Woodward’s racial Kool Aid.

Earl Ofari Hutchinson is an author and political analyst. He is the author of the forthcoming Why the Electoral College Not You Elects Presidents (Amazon Kindle. He is a weekly co-host of the Al Sharpton Show on Radio One. He is the host of the weekly Hutchinson Report on KPFK 90.7 FM Los Angeles and the Pacifica Network.