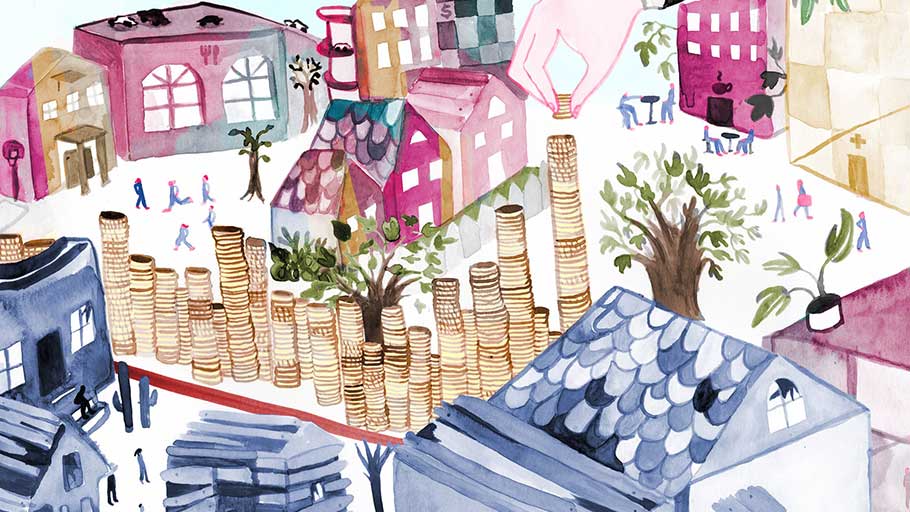 ‘Housing is central to the ‘good life’ in the United States.’ Illustration by Alexandra Bowman for Guardian US

In the US, where homeownership speaks to class, African Americans are being denied mortgages at rates much higher than their white peers

By Keeanga-Yamahtta Taylor, The Guardian —

As a new year begins and the 2020 presidential election looms closer, our political focus will start to narrow around the issues thought to be most urgent and likely to mobilize voters. One issue surely to be glossed over, if not completely ignored, is the persistence of racial segregation. Even writing it feels off-topic, like referring to an anachronism. We have become so habituated to the ingrained treads of our racial geography that they are unremarkable. When segregation is remarked upon, it is almost always in reference to the histories of public policy and private action that were necessary to the invention of “black neighborhoods” or “white suburbs”.

In other words, residential segregation and discrimination in the American housing market are considered historical matters. That the nefarious operations of the Federal Housing Administration have come to light and redlining has become more widely understood have not been enough to generate the urgency necessary to dismantling today’s unjust housing practices. Consider the muted recognition of the 50th anniversary of the 1968 Fair Housing Act.

In its time, federal fair housing, which entailed the right to be free of racial discrimination in the housing market, was hailed as the crowning achievement of the “rights revolution” of the 1960s. But the effects of “fair housing” have been imperceptible in large swaths of the country, where poor and working-class African Americans live in racially segregated enclaves. The reluctant celebrations of the Fair Housing Act’s milestone anniversary this past year were rooted in the basic fact that racism continues to pervade the American housing market. This reality was made worse by the selection of the underwhelming neurosurgeon Ben Carson as secretary of the Department of Housing and Urban Development. Carson has characterized the formal objectives of the Fair Housing Act, including the affirmative pursuit of racially and ethnically mixed communities, as “social engineering”. He has worked to undo the legally mandated responsibility of Hud to not only fight racial discrimination but to pursue integrated communities where it can.

But even before the neurosurgeon took a sledgehammer to the stated mission of Hud, the agency was hardly effective in rooting out discrimination. If there were any questions, they had to have been snuffed out by the housing collapse that precipitated the economy crisis of 2008 – the anniversary of which was also scarcely observed. When the dust settled, more than 240,000 African Americans had lost their homes to foreclosure because of predatory home loans they had been targeted and manipulated into taking. The story of real estate racism and the subprime loan market is an old one now, but it served as a reminder that no matter the language of the law regarding “fair housing”, racism in the housing market persisted.

The destruction of the value of black housing 10 years ago has set the stage for revamped exploitative practices that view African American communities as sites of extraction instead of investment. In cities that suffered some of the greatest housing losses, like Chicago and Detroit, there has been a resurgence of “land installment contract” sales on homes for those whose credit won’t allow them to secure conventional loans. Disproportionately elevated rates of poverty, few financially meaningful assets, and rock-bottom wealth accumulation have combined with racist assumptions in this contemporary moment to, once again, marginalize prospective black property owners.

And the rising costs of rent weigh heaviest on African Americans, who suffer from lower wages. Over the last year, rents have risen across the United States by 4% to an average of $1,209 for a one-bedroom apartment and $1,442 for a two-bedroom apartment. In some cities, such as San Francisco, Boston, New York and Chicago, it is nearly impossible to find safe and sound apartments for these prices. As the cost of rent climbs above income, ordinary people face eviction, displacement and homelessness.

Escalating rents can also help to constitute markets out of condemned and otherwise uninhabitable properties. In Philadelphia, hundreds of apartments have been legally designated as “unfit for human habitation” and yet landlords, often illegally, collect tens of thousands of dollars in rent on these dwellings. According to a Harvard study, between 2010 and 2017 prices “in poor urban neighborhoods rose 50% faster than in rich neighborhoods”.

Cities will often turn a blind eye in the cases of the most egregious housing abuses because they are not willing to create an alternative. Over the last two decades, tens of thousands of units of public housing have been destroyed, often on the lie that they would be replaced. But rather than replacing desperately needed public housing or developing concrete plans for refurbishing affordable housing, municipalities allow dangerous “last resort” housing to exist for its poorest, and often black, residents.

In place of publicly financed and managed housing, housing vouchers that ostensibly allow holders to overcome the expense of rentals in better-resourced neighborhoods have been put forward. But renters wait for an average of 32 months to obtain vouchers in those states that still maintain waiting lists. And, with the exception of those living in Chicago, New York and Washington DC, no landlord is required to accept them. In a city like New Orleans, 99% of voucher recipients are African American and 82% percent of landlords refuse to accept vouchers. Even in cities where this practice is illegal, without a commitment and staffing to enforce anti-discrimination laws, there is very little to stop housing discrimination. The result is that poor and working-class black renters remain isolated in economically marginal neighborhoods. These are communities that have become ripe for human disposability. These are the food and job deserts where families are stranded by inadequate public transit systems and rising fuel costs. The divestment from these neighborhoods shows up in under-resourced public services and facilities like schools, hospitals, and libraries, all hemmed in by violent and abusive policing.

The crises spawned by the spatial, economic and social isolation of African Americans are still generating consequences

While we may understand many of the roots of residential segregation, its persistence has created the perception that it is an unchanging, even permanent, fact of American life. The visual markers of a multiracial society – and the fact that racial boundaries that used to be virtually airtight have become somewhat more permeable – have, perhaps, mitigated the sense of urgency that residential segregation inspired 50 years ago. But the crises spawned by the spatial, economic and social isolation of African Americans throughout the 20th century are still generating consequences, even if we don’t discuss them as such.

Housing is central to the “good life” in the United States. At the same time, America’s governing bodies have abdicated a responsibility to house their residents to a private, profit-seeking sector that has played a historic role in the segregation of our cities and suburbs. The real estate industry has always relied on racism to generate profit for its stewards. It is, quite simply, why racism continues to flourish in the housing market a half-century after the Fair Housing Act was passed.

Until we remove profitability from the equation and, instead, treat the right to safe and sound housing as a human and civil right, residential segregation will continue to thrive – and, in turn, drive up prices. The higher the costs of housing, the more those who suffer from lower wages and higher debt are forced to the margins of the market. African Americans are overrepresented in the group of people suffering from this inequality, demonstrating yet again how race is firmly linked to class in the United States.