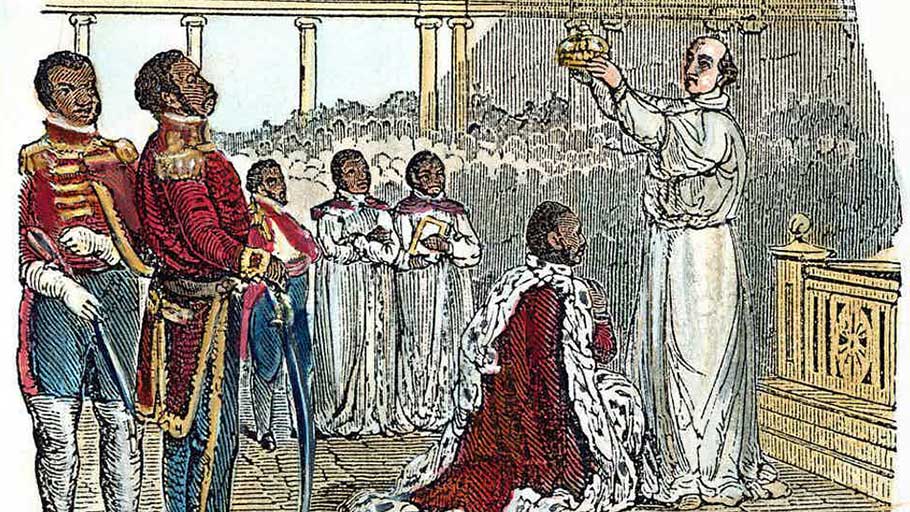 Inside the Kingdom of Hayti, ‘the Wakanda of the Western Hemisphere’

You Are Here: Home » Blog » Editors' Choice » Inside the Kingdom of Hayti, ‘the Wakanda of the Western Hemisphere’

By Marlene Daut, University of Virginia —

Marvel’s blockbuster “Black Panther,” which recently became the first superhero drama to be nominated for a Best Picture Academy Award, takes place in the secret African Kingdom of Wakanda. The Black Panther, also known as T’Challa, rules over this imaginary empire – a refuge from the colonialists and capitalists who have historically impoverished the real continent of Africa.

But fans of the box-office hit might not realize that they don’t need to look to the make-believe world of the Black Panther to find a modern-day black kingdom that aspired to be a safe haven from racism and inequality.

The fictional kingdom has a real-life corollary in the historic Kingdom of Hayti, which existed as a sort of Wakanda of the Western Hemisphere from 1811 to 1820.

The Haitian Revolution led to the creation of the first free black state in the Americas. But the world was hardly expecting a former enslaved man named Henry Christophe to make himself the king of it.

Media accounts from the era, some of which I’ve collected in a digital archive, serve as a window into a brief period of time when the kingdom stood as a beacon of black freedom in a world of slavery. Yet, like Wakanda, the Kingdom of Hayti wasn’t a utopia for everyone.

A new kind of kingdom

On Jan. 1, 1804, an army led by former enslaved Africans in the French colony of Saint-Domingue staved off France’s attempt to bring back slavery, and declared themselves independent and free forever.

The leader of the revolutionaries, General Jean-Jacques Dessalines, had defeated Napoleon’s famous army and made himself emperor of the newly-renamed Haiti.

But in October 1806, Dessalines was assassinated by political rivals, leading the country to be divided into two separate states: General Henry Christophe named himself president of the northern part of Haiti, while General Alexandre Pétion governed a completely separate republic in the southern and southwestern part of the country. 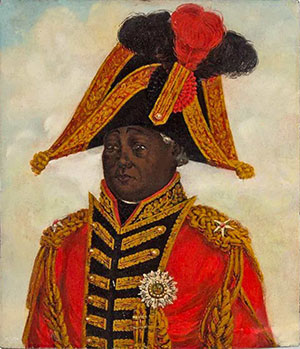 ‘I am reborn from my ashes’ was the motto of Henry I, the former slave who became king. Wikimedia Commons

In March 1811, President Henry Christophe surprised everyone when he anointed himself King Henry I and renamed the northern republic, the Kingdom of Hayti. Henry I soon had a full court of nobles that included dukes, barons, counts and knights to rival that of royal England.

Haiti’s first and only kingdom immediately attracted the attention of media outlets from around the world. How could there be a republic on one side of the island and a monarchy on the other, they wondered? Was the new black king trying to mimic the same white sovereigns who had once enslaved his people, others asked?

The edicts establishing the royal order of Haiti were immediately translated into English and printed in Philadelphia, while many American and British newspapers and magazines ran celebrity profiles of the Haitian king.

The ‘First Monarch’ of the ‘New World’

In 1813, construction of the opulent Sans-Souci Palace – meaning literally “without worry” – was completed.

The palace was partially destroyed by an earthquake in 1842; today, its remains have been designated a world heritage UNESCO site.

During its heyday, the palace dazzled.

There were the elegantly manicured gardens and a unique, domed cathedral. The structure was flanked by a dramatic double staircase leading to the entryway and two arches detailed with etchings and inscriptions. One acknowledged Henry, rather than Jean-Jacques, as the country’s “founder.” 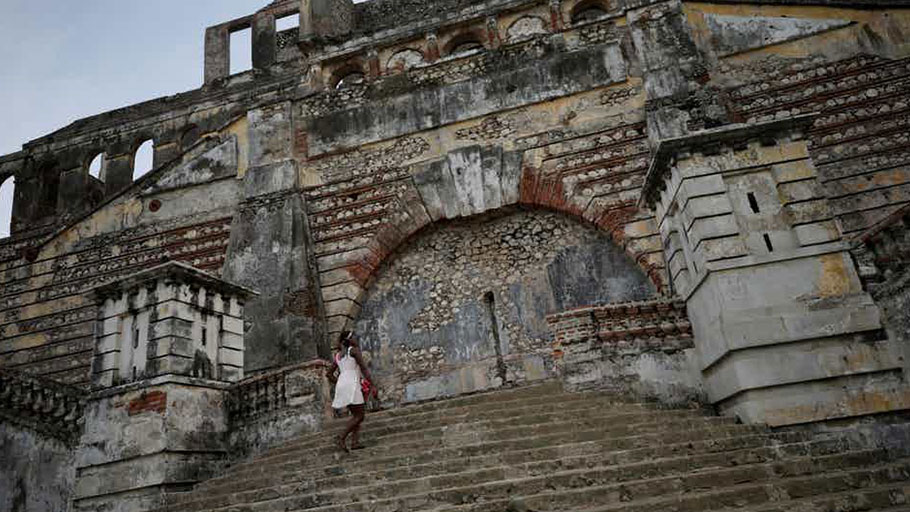 A woman climbs the stairs on the remains of Sans-Souci Palace in 2017. Andres Martinez Casares, Reuters

There were also two painted crowns on the principal palace façade, each of which stood at 16 feet tall. The one on the right read “To the First Monarch Crowned in the New World.” The one on the left said “The Beloved Queen Reigns Forever Over Our Hearts.”

King Henry lived in the palace with his wife, Queen Marie-Louise, and his three children, Prince Victor Henry, and the princesses, Améthyste and Athénaire. 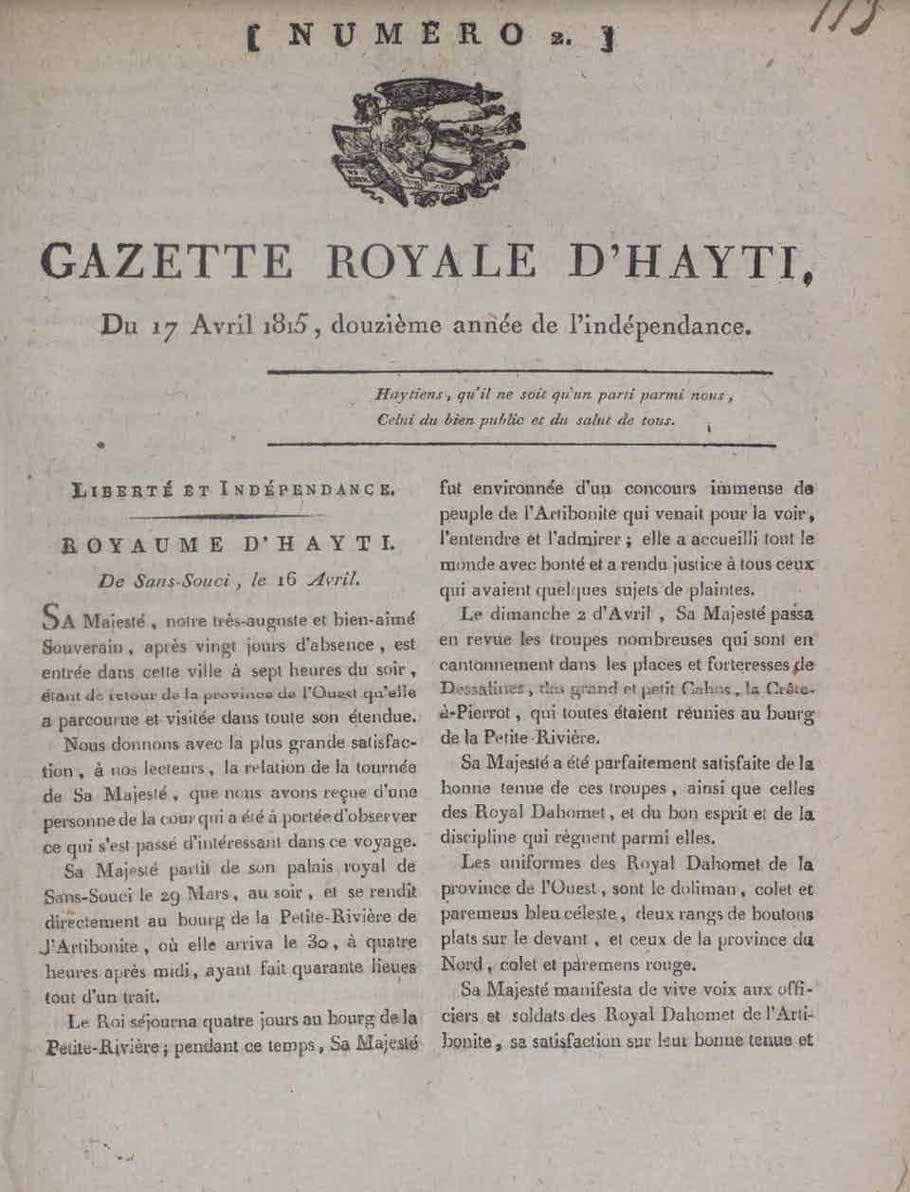 An April 1815 issue of The Gazette Royale details how the Kingdom of Hayti foiled France’s attempt to reconquer its former colony.

Newspapers around the world reprinted articles from the monarchy’s official newspaper, the Gazette Royale d’Hayti, detailing the royal family’s lavish dinners, replete with bombastic speeches and lengthy toasts to famous contemporary figures such as King George III of England, U.S. President James Madison, the King of Prussia, and the “friend of humanity,” the “immortal” British abolitionist Thomas Clarkson.

The Gazette also recounted the decadence of Queen Marie-Louise’s August 1816 official birthday celebration, which lasted for 12 days and had 1,500 people in attendance. On the final day of the party, 12 cannons fired after the Duke of Anse toasted the queen as “the perfect model of mothers and wives.”

A free island in a sea of slavery

There was much more to King Henry’s reign than luxurious parties.

On March 28, 1811, King Henry installed a constitutional monarchy, a move lauded by many in the British elite. The famous British naturalist Joseph Banks championed Henry’s 1812 book of laws, titled the “Code Henry,” calling it “the most moral association of men in existence.”

“Nothing that white men have been able to arrange is equal to it,” he added.

Banks admired the code’s detailed reorganization of the economy, from one based on slave labor to one – at least in theory – based on free labor. This transformation was wholly fitting for the formerly enslaved man-turned-king, whose motto was “I am reborn from my ashes.”

The code provided for shared compensation between proprietors and laborers at “a full fourth the gross product, free from all duties,” and it also contained provisions for the redistribution of any land that had previously belonged to slave owners.

“Your Majesty, in his paternal solicitude,” one edict reads, “wants for every Haytian, indiscriminately, the poor as well as the rich, to have the ability to become the owner of the lands of our former oppressors.”

Henry’s stated “paternal solicitude” even extended to enslaved Africans. While the Constitution of 1807 had announced that Haiti would not “disturb the regimes” of the colonial powers, royal Haitian guards regularly intervened in the slave trade to free captives on foreign ships that entered Haitian waters. An October 1817 issue of the Gazette celebrated the Haitian military’s capture of a slave ship and subsequent release of 145 of “our unfortunate brothers, victims of greed and the odious traffic in human flesh.”

Too good to be true?

Yet life in the Kingdom of Hayti was far from perfect.

Henry’s political rivals noted that people frequently defected to the southern Republic of Haiti, where they told stories of the monarch’s favoritism and the aristocracy’s abuse of power.

Worse, Henry’s famous fortress, the Citadelle Laferrière, was, according to some accounts, built with forced labor. For this reason, Haitians have long debated whether the imposing structure, which was restored in 1990, ought to symbolize the liberty of post-independence Haiti.

Henry’s dreams of a free black kingdom would not outlive him. On Aug. 15, 1820, the king suffered a debilitating stroke. Physically impaired – and fearing a fracturing administration plagued by the desertion of some its most prominent members – Haiti’s first and only king killed himself on the night of Oct. 8, 1820. 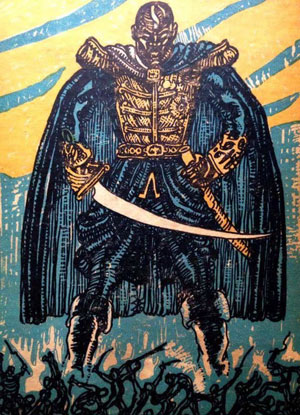 Despite some questions about living conditions in the Kingdom of Hayti, its ruler can still be recognized as a visionary. Even one of his most ardent rivals from the south, Charles Hérard Dumesle, who often referred to Christophe as a “despot,” nonetheless praised the remarkable “new social order” outlined in the Code Henry. Dumesle appeared to lament that the king’s “civil laws were the formula for a social code that existed only on paper.”

For all those who still dream of black liberation, strong – if ultimately flawed – leaders, like both the King of Hayti and Black Panther, have always been central to these visions.

King Henry was even depicted as a sort of superhero in his time. As one article from 1816 noted of Henry,

“History demonstrates that no people has ever done anything great entirely by themselves; it is only ever in collaboration with the great men who become elevated in their midst that they raise themselves up to the glory of accomplishing extraordinary deeds.”

This article was originally published in The Conversation