Why We Keep Talking About Racism

You Are Here: Home » Blog » Commentaries/Opinions » Why We Keep Talking About Racism 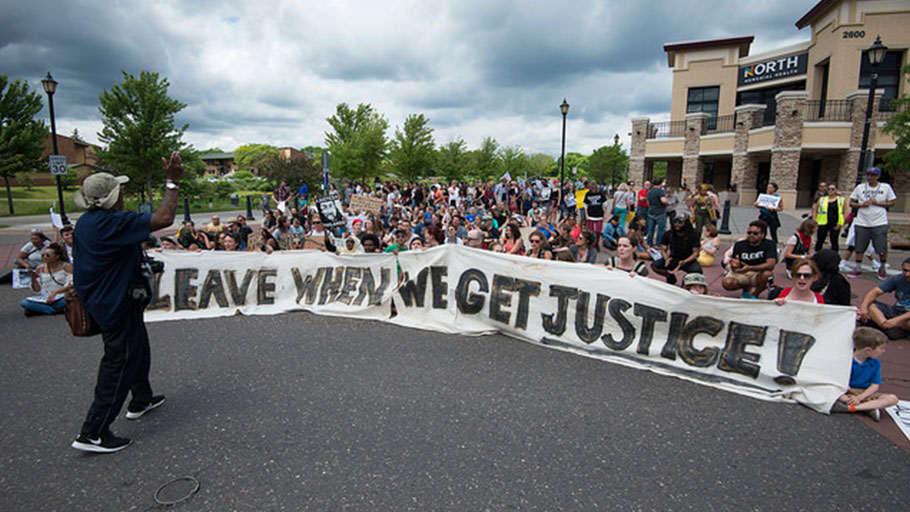 When the media publish articles that explicitly talk about race and racism — calling out or calling in White people — sometimes people get upset. “They’re divisive,” some have said. “YES! used to be positive,” others have said.

Why do we do it? Because race matters.

Let’s be honest: Some problems won’t be solved with co-ops, solar panels, and water wells. Sometimes difficult discussion about race and oppression is a solution in itself, crucial to the liberation of everyone. And, yes, these discussions can cause discomfort.

We live in a system that keeps Americans divided by race, those who have lived traumatized by it and those who have benefited from it. So talking about race is not easy, and depending to whom you’re speaking, dangerous. But there’s a lot at stake. We need courage and a willingness to engage others who have different experiences. After that, we need the fortitude to sustain those conversations and the sensitivity to deepen them.

This is hard work, I know.

Singleton offers a unique approach to having conversations about race, intended to engage, sustain, and deepen the conversions. Whether talking to people within our race or with others, he believes we need to practice four agreements: stay engaged, speak your truth, experience discomfort, and expect and accept non-closure.

The interview has been condensed and lightly edited.

Glenn Singleton: It’s … “the relationship between the darker and lighter men,” [DuBois] wrote, “in Asia, Africa, America, and the islands of the sea.”

DuBois’ narrative was not only a study of the challenge in the United States, but he spoke of global White supremacy. [He] indicated that we would come up with all kinds of reasons to minimize this stark reality that race matters, and race has mattered, and race will continue to matter, as long as we meet … these racial realities with denial.

Only when we diminish the importance of race. [When that happens] you can feel the difference in the conversation. For the first time, I decided to theme [this year’s] summit at the intersection. “She Speaks Her Truth” is really a recognition that race isn’t walking in the sphere of challenge for human beings by itself as an isolate; it’s walking in intersection.

Most people of color understand the benefit of talking about race and racism. What benefit is there to White people?

The most obvious case for me has been the past presidency. Obama will never get his recognition for having to redesign leadership in this country at the highest level to work for a Black man against all of the oppression. And then the powerful juxtaposition of [Trump], a White man who is by every definition of the presidency and the criteria completely unqualified.

White people in the United States with an inability to see that this would never be accepted for a person of color, that’s where this destroys them. And while it’s not [the kind of] violence that has [targeted people of color] over the ages, from killing and hanging, castration of men of color, rape of women of color … it is a moral, spiritual decay that occurs when a person who is White can’t see these things and feel these things as an injustice.

How does the change happen for White people to want to enter into a conversation about race, or do anything about racism?

Because they as a collective … have an extraordinary diversity within them. And within them — which is why I went to the intersection — there are White women. And if women truly understand systemic marginalization based on the factor of their gender/sex, then they understand marginalization. So there’s something in White women that’s not allowing them to make the application, to make the translation [to race].

They know that society is capable of a kind of categorical oppression — systemic oppression. So they get that. Jewish American people in the United States also know that because anti-Semitism is profound. So, Jewish White women should really be showing up quite differently around race and racism, but that’s not [what’s happening].

White people have to develop a capacity to understand their resistance to engage with Black people, and what that resistance is about.

How do they do that?

They look to other White people who are doing much better than they are in terms of engaging with Black people. And they begin to inquire.

White Americans don’t have trouble talking to other White Americans, particularly when they’re White Americans who share political ideology and economic class. And within those similarities there is a range of engagement around race. [Those who are] more advanced [in that engagement] have struggled to bring along some of the others [in their communities].

Since the Trump campaign and subsequent presidency, more people are talking about race/racism and White supremacy, but some would like to center the conversation of America’s problems around economic class or political divides — liberal versus conservative. What happens when we don’t center race as the problem?

Until White American people truly see people of color as their equals, we’ve got a problem with race. When we talk about the president, I don’t think this is a political conversation, it’s much bigger. It crosses economics, it crosses education.

When we talk about the color line, it’s mostly the Black–White binary. You say other people of color (Native, Latino, Arab, Asian) are all in between. But many people of color don’t see themselves as part of that color line, preferring to identify specifically.

On [one] end [is] where Black is targeted, Black is oppressed, Black is diminished, Black is seen as the problem, as DuBois wrote. There is an understanding that those two very different situations exist. Black people are the understanding of how bad racism gets. And Black doesn’t mean that I’m not talking about Southeast Asian, Native, Latinx.

I have staff that are Afro-Cuban, and this is Cuban national identity of Black skin, African tradition in the ethnicity piece, all of those are there. But Cubans need to be able to talk about the movement and the experience of Cubanos who are [on the full continuum of] Black to White. You can start to see very specifically when those shades start to be seen as part of dominant and when they start to be included as part of oppressed.

But race is not only about the physicality of one’s skin color, hair texture, etc. You identify three parts of race: color, culture, and consciousness.

Color — that’s really just negotiating privilege. It saddens me that the country struggles so much to accept that basic aspect. Once you’re told about it and then you can observe it, you have to stop denying it.

I didn’t ask to have this skin color. I find it to be a blessing, but these aren’t choices that we make. I point out to my White friends over and over again the places in which oppression occurs for me, and privilege occurs for them. So, I expect them, when I’m not around to be able to see these things also.

And, if they don’t see it, I don’t mind pointing it out.

The culture aspect is behavioral. When do people learn the behaviors of interrupting White supremacy? That to me is the sophisticated place that we have to go, those places where we keep making it that white-skin people have the easy way to go in this society.

And consciousness is born out of our [behavioral] experiences. How much of what is hoarded in the White experience causes damage to my psyche, to my sense of belief in self, to my ingraining decision that my skin color means something about ability, something about all of those factors of my humanity?

And so having race conversations is an effort to change beliefs, first?

You have to. There are so many behaviors connected to a single belief.

I always use the example when working with teachers: When I walk into a classroom and I’m observing a teacher [so I can] support the teacher’s development to culturally relevant practice, and I notice that the teacher is mistreating a Black male student by further marginalizing him and putting him in the corner. And I say to the teacher, don’t do that. “Don’t do that” is a behavioral modification. But the belief that allowed the teacher to put the student there is going to show up in something else.

So you’ve got to get at that belief, at the core, which is in the essence of the country. It’s the value, it’s the belief in this society.

We’re really sensitive and understand when we’re not welcome.