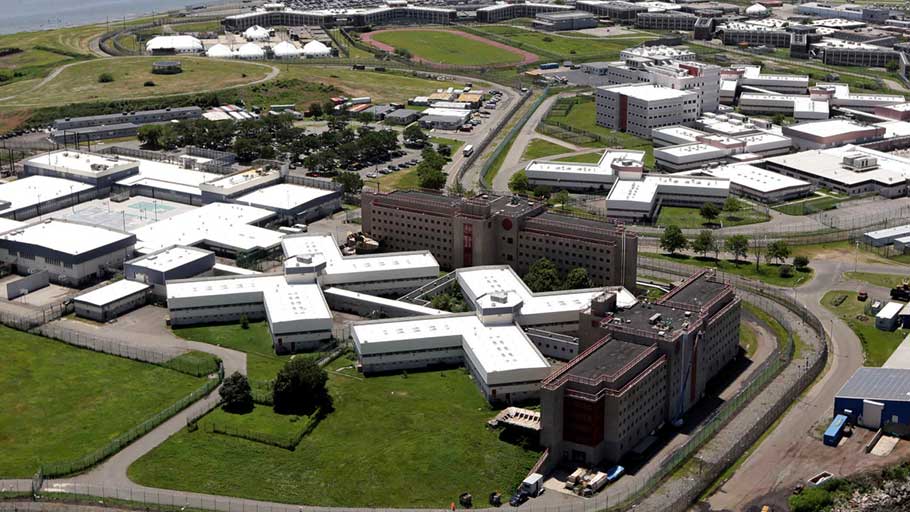 Making Sense of the Fight over New York City Jails

You Are Here: Home » Blog » Commentaries/Opinions » Making Sense of the Fight over New York City Jails

By Gabriel Sayegh, Katal Center for Health, Equity, and Justice —

The fight to close Rikers is reaching a boiling point again. Next week, the New York City Council will vote on the land-use proposal for the construction of replacement jail facilities in the boroughs. The proposal is a major component of the City’s contentious plan to close Rikers, and the entire process has generated controversy within the movement to end mass incarceration. Tensions have surfaced and there is growing conflict—about the various proposals, the closure process, and even basic facts. With this summary we provide some background and context about what’s going on and why.

“Conditions of confinement” are central to the debate. This refers to the physical, mental, and psychological conditions people experience when they are locked up. Is the physical space geared toward rehabilitation and not violence? Is there programming available, like GED classes and peer support groups? Is there space for recreation? Do people have access to proper health care? Is there natural light? Do people have outdoor facilities to use? Do community groups have access to provide additional types of support? Is the visiting area open to loved ones and other community members? How much freedom of movement do people have? Is the location accessible and can legal counsel and other visitors get there by public transit? All of these factors contribute to the conditions people are subject to while being detained.

Conditions of confinement are central to the debate because people will continue to be detained in New York City after Rikers closes. All four of the major plans proposed by government, policy, and social movement actors acknowledge this: the Lippman commission’s plan, published in April 2017; Mayor de Blasio’s plan, released in August 2017 and repeatedly revised; the #CLOSErikers #buildCOMMUNITIES plan (Part 1 and Part 2) released in early 2019 [1]; and the No New Jails NYC (NNJ) plan, issued last month. Many groups active in NYC and beyond—among them some #CLOSErikers members (like Katal and JustLeadershipUSA) and the NNJ network—have an abolitionist vision and want to see jail and prisons eliminated entirely. These groups have all recognized that detention won’t end in NYC when Rikers shuts down.

The city’s jail population has been steadily declining for the past 20 years. As of last month, just more than 7,000 people were detained in NYC jails on any given day. We must address two central questions immediately: First, once Rikers is closed, what will the City’s maximum detention capacity be? Second, what will the City do with people who are detained: Where will they be held and, crucially, in what kind of conditions?

We have to make the detention capacity in NYC as small as possible, and all four plans address this. We must also focus on ensuring safe, more humane conditions for people who are detained, though only three plans include proposals to do that. But despite important differences, the four plans also have tremendous similarities. 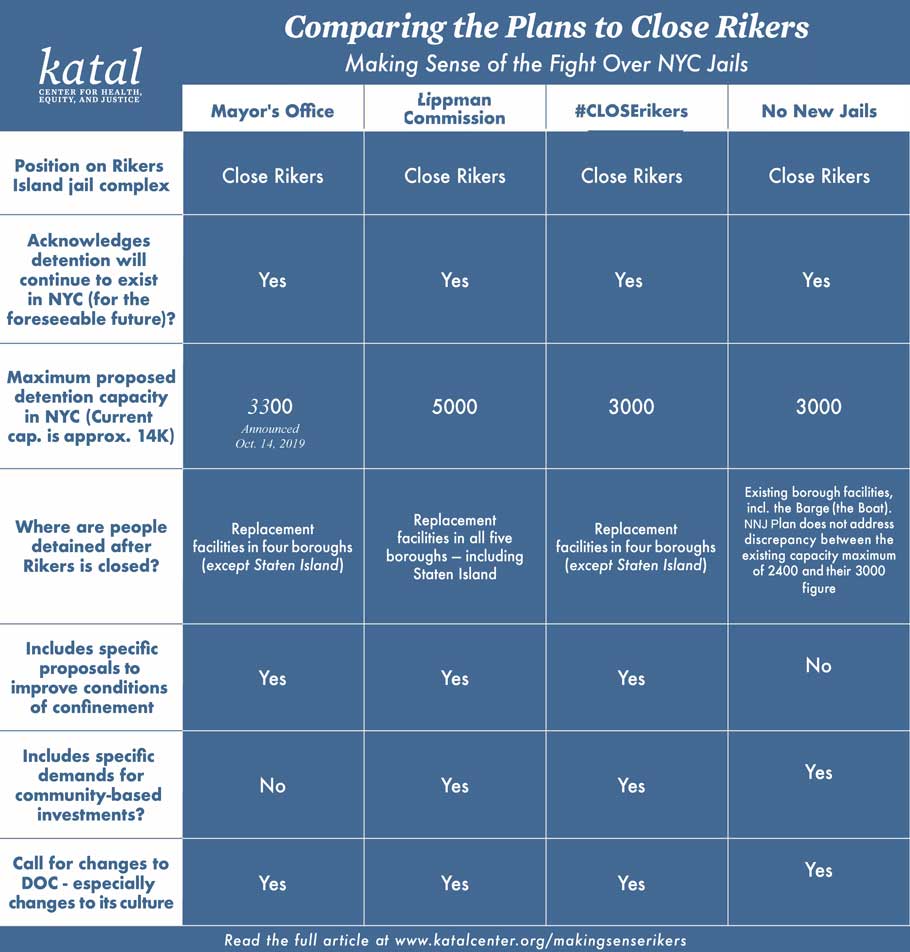 NYC jails now have a maximum capacity of about 14,000 people spread across 11 operational facilities. The eight functioning jails on Rikers Island have capacity for nearly 12,000 people. Then there are three borough-based facilities: the Manhattan Detention Complex (two buildings—the North Tower and the older South Tower, known as “the Tombs,” which opened in 1983), the Brooklyn Detention Complex (built in 1957), and the Vernon C. Bain Center, known as “the Barge,” a five-story jail boat built in 1991 on the South Bronx shore of the East River. The capacity of these three facilities is about 2,300—ranging from roughly 565 to 865 people each, according to the most recent statistics from the Mayor’s Office of Criminal Justice. [14] (The jail at the Queens Detention Complex was taken offline in 2003 because it was so dilapidated that it did not “meet basic state standards.” [15])

Approximately 7,000 people are currently detained citywide in DOC facilities. This is down from a peak of about 22,000 in 1991, when Rikers was bursting at the seams and included temporary tentlike facilities. [16] As a result of the justice movement pushing for decarceration for two decades, today’s detention population represents less than half of the DOC’s current capacity. New York City no longer has an overcrowded jail system: It is about half full, so the DOC has thousands of empty jail beds. Closing Rikers means reducing the City’s overall detention capacity; it also means that people who remain subject to jail will be held in facilities in the boroughs.

Whether the City refuses to budge on 4,000 as the detention capacity or agrees to a maximum of 3,000, as both #CLOSErikers and NNJ are demanding, a serious problem looms: The existing borough-based jails have a maximum capacity of approximately 2,300 beds and are legally authorized to hold about 2,100 people. [17] Attempting to overcrowd people into those facilities would be inhumane and prohibited by law. If the City doesn’t increase the maximum capacity in the boroughs, it significantly increases the likelihood that Rikers will be kept open.

And even if #CLOSErikers, NNJ, and others can get the City to agree to a smaller maximum capacity—say 2,000—it wouldn’t make sense to subject people to detention in the existing borough-based jails. The Tombs, the Brooklyn House of Detention, and the Barge are dangerous and decrepit. The Tombs has a history of violence and corruption; it has been described as “dark and damp, and…sometimes it’s as cold as a refrigerator; at others, the kitchen feels like a sauna.” [18] The Brooklyn jail has cells and day rooms so small that they do not meet the current standards of the State Commission on Correction. (It remains open because it was grandfathered in. [19])

These facilities have limited space for proper medical care, classes, or programs. Community groups have limited access. Visitation areas are inadequate, and people are often forced to line up outside waiting to see loved ones. And all three jails have the same culture as Rikers. Continuing to use them to detain people would be scandalous. Keeping the Barge open would be a particular outrage; for years the #CLOSErikers campaign and local City Council members have pushed to empty and destroy it. As JustLeadershipUSA organizer Marvin Mayfield said about his time locked up there, “It’s gloomy, dark and it’s airless. And it really does resemble a slave ship.”

Securing a Guarantee to Close Rikers

Mayor de Blasio was opposed to closing Rikers before NYC’s justice movement forced him to announce that he would shutter the facility. (For more on what local organizers accomplished and how, see our #CLOSErikers campaign summary.) And from the moment the mayor released his plan in 2017, groups throughout NYC have worked to improve it—by shrinking the projected detention capacity, speeding up the closure of Rikers, reducing the proposed size of borough-based jails, strategizing to remove DOC from control of the facilities, and more. The mayor initially announced a 10-year timeline for the entire process, which would have resolved in 2027. That has moved back to 2026. Many groups, including #CLOSErikers and NNJ, are fighting to make the timeline even shorter.

And although the de Blasio administration has declared “closing Rikers” to be official city policy, both #CLOSErikers and NNJ called for a legally binding commitment. But a mechanism to secure a legal “guarantee” had long been elusive; there was no obvious means by which to do so. Just this week, after sustained pressure by local groups, the Mayor’s Office and City Council announced a novel way to bind the City to close the facilities, by legally limiting Rikers Island to non-jail uses after 2026. [20] #CLOSErikers supports this proposal and is pushing the City to adjust the timeline to 2024. Other strategies are being pursued, such as “Renewable Rikers” legislation to use the island for green energy purposes and a potential executive action to transfer the land from the control of the DOC to another agency.

The Universal Land Use Review Procedure (ULURP), the City’s standard approval process for construction, is an important step in this process. [21] Because it isn’t possible to detain 3,000 people (or worse, 4,000 people) in the existing borough-based facilities without new construction, the ULURP process is critical for holding the City to its commitment to close Rikers and to ensure more humane conditions for those who are detained. #CLOSErikers has raised the concern that if the land-use agreement fails, the next mayoral administration (or even this one) could use that as an excuse to keep Rikers open. There’s already a growing push to do that and scrap the borough-based jail plan, as proposed by some NIMBY neighborhood groups and architects, City Council members, and a candidate for local office in the 2021 election. Keeping Rikers open is a much easier path for reluctant public officials. When the #CLOSErikers campaign started, the de Blasio administration was planning to construct a new jail on Rikers—and no land-use approval process would be required to do so.

Even with these processes in place, it is incumbent on community groups and social movements to hold the City accountable by pushing for an even shorter timeline, a smaller maximum capacity, and working to ensure that the closure process progresses through the 2021 election, when we will elect a new City Council and a new mayor (and new borough presidents and more). Put another way: ultimately, no legislation, consent decree, or promises from politicians will get us there; we have to keep organizing so that Rikers is shuttered once and for all.

Community groups and social movements are fighting to close Rikers, get the City’s detention capacity down to a maximum of 3,000, and secure deep investments in the communities most harmed by mass incarceration. Achieving these goals would result in New York City having one of the lowest rates of incarceration in the industrialized Western world. It would constitute an unprecedented victory in the fight to end mass incarceration, the result of decades of effective organizing locally and statewide. And it still leaves much more for us to do to end mass criminalization in communities of color and continue driving down the jail population, in part by confronting how to limit and ultimately end pretrial detention for people charged with violent and other serious felony offenses. That’s relatively new terrain for the movement. [22]

Because people will still be detained in New York City after Rikers is shut down, conditions of confinement must go hand in hand with the fight for decarceration. For people who are subject to detention, the conditions of confinement must be more humane. Rikers must be shut down, and so long as there is detention here, the City’s other decrepit jails must be replaced. Reducing the detention population even further will require sustained organizing locally and statewide. We have to keep pressuring City government. And we’ll need to focus on elected officials in Albany to pass reforms that include reducing detention populations (like our #LessIsMoreNY parole reform bill), advancing decriminalization, expanding alternatives to incarceration for violent felony offenses, securing police accountability and constricting police powers, repairing the harms to communities impacted by the systemic racism that drives mass incarceration, and making deep investments to support communities in securing safety and justice without relying on police, courts, jails, or prisons.