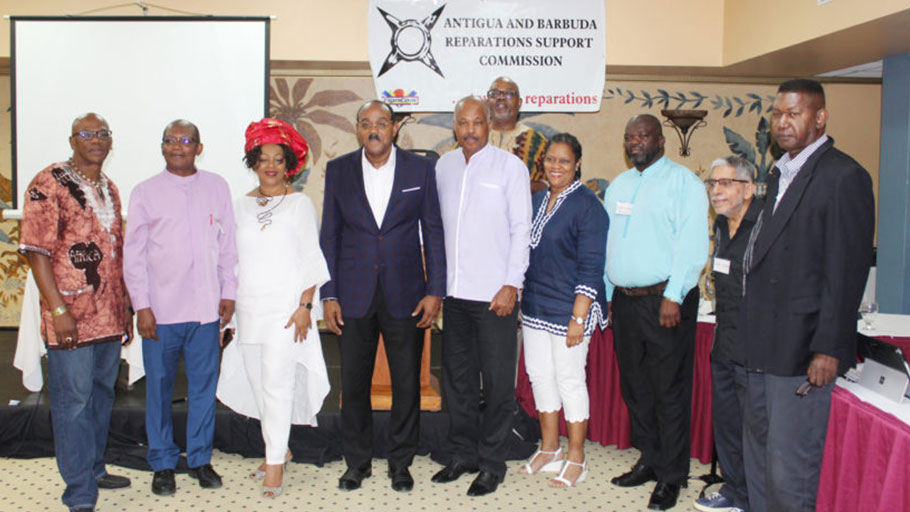 Prime Minister Gaston Browne (fourth from left) take a photo op with members of the CARICOM Reparations Commission and the Center for Reparation Research during the Symposium on Western Banking, Colonialism and Reparation at the Starfish Jolly Beach Hotel yesterday PM Browne was the keynote speaker. (Photo courtesy Angelica O’Donoghue)

I bring no special expertise or unique perspective to the issue of reparations. However, I am here primarily to signify my personal commitment to the fight to achieve reparatory justice.

Approximately five years ago, on October 14, 2014, at the second regional conference on reparations, held at the Multipurpose Cultural Centre, a mere four months of becoming Prime Minister, the Hon PJ Patterson, who was the featured speaker said to me: “As one who belongs to the older generation of Caribbean leaders, I am here today to present that torch to a leader of the younger generation and to say: Never let that torch be extinguished.”

It’s a torch that I have accepted with dignity and pride on behalf of the current Caricom leaders, with undertaking, that we will never allow it to be extinguished.

Today, five years later, I say to all of us, following on the admonition of PJ Patterson – that, as the progeny of an enslaved people we should all commit to keeping reparations fire burning.

I wish to welcome to Antigua and Barbuda, today, all the delegates from around the region and elsewhere. We especially welcome the members of the Caricom Reparations Commission which was formed in 2013, to seek reconciliation between the victims and beneficiaries of the transatlantic slave trade, slavery and colonialism.

Colleagues, you have come at an opportune time when Antigua and Barbuda is beginning to celebrate its 38th anniversary of Independence, on 1st November, 2019.

In 1981, despite the colonial mess we inherited, we were successful in growing our country’s economy by 1400 percent in the space of 38, years from the gross domestic product (GDP) totaled US $125 million. Today, in 2019, the GDP totals US $1.75 billion.

It might appear somewhat contradictory to bemoan the cruelty meted out to generations of my forebears, who toiled ceaselessly for four hundred years, and in the same breath to applaud recent generations for moving Antigua and Barbuda out of poverty and into middle-income status.

This is to demonstrate that the people of Antigua and Barbuda, notwithstanding the oppression, have never stopped trying to improve their material, spiritual, cultural condition, utilising the limited internally generated resources.

Consequently, we are not sitting in a state of paralysis, awaiting handouts from the international community to advance our country and its people.

The optimism of our forebears has permanently impacted our vision of tomorrow and we have utilized our entrepreneurship, strategic thinking, innovativeness and creativity to propel our countries forward despite the challenges.

Our ancestors have left us a proud history, legacy of seizing the reins of our independence and sovereignty, against all odds, to develop our countries rapidly after centuries of colonial or hegemonistic exploitation.

However, we cannot forget that our European oppressors, not only exploited us but left us all in a condition of extreme poverty, mass illiteracy, inadequate health and educational institutions and a pandemic of chronic debilitating NCDs derived from centuries of excess salt and sugar consumption.

The Europeans utilised an inhumane model, a brutal extractive economic model to control the Caribbean, as a zone of wealth creation to fund their development.

They presided over the brutal genocide, resulting in the death of millions of Africans, and created a system of slavery and colonialism.

This system of wealth creation, involved the use of three million, unpaid and underpaid African workers for four hundred years.

The human bodies and labour of our ancestors, provided Europeans with lucrative sources of capital, and the trade in human beings (chattel slavery), was intimately linked to the financial sector.

Financial institutions to include banks and insurance companies, provided supply chain credit to charter vessels and funds to purchase and cover insurance of their stock (slaves) and other operating expenses. These loans were repaid from the sale of slaves, as human commodity.

European banks to include British banks, made a fortune from the transatlantic slave trade. The plantocrats invested their profits and their compensation money in various businesses to include, banks and universities.

The Colonial Bank which was established in 1836, is one such institution in which the plantocrats invested the 20M pounds compensation, representing 40 percent of the UK’s annual revenue at the time. The Colonial Bank expanses throughout the British Empire, was subsequently subsumed into Barclays Bank, generating trillions of dollars in investment value for the plantocrats and their offsprings.

Slavery and colonialism were central to European trading history, they built impressive cities and generated significant wealth, including inter generational wealth on the backs of slaves. Even the funding of the industrial revolution by these banks, would have linked to the profits generated from the trans Atlantic slave trade.

While they exploited our people to build their empires, they have left Caricom countries and our people, poor and vulnerable, hence the need for reparations.

Reparations is the process of repairing the intergenerational poverty, debilitating effects and vulnerabilities, created by the savageous system of colonialism and slavery. It is non confrontational and conciliatory and seeks reconciliation between victims and beneficiaries. Notwithstanding, the conciliatory nature of reparations, we should be strident in our just claim for reparations.

The legal process of reparations seeks an apology for wrongdoing and reasonable reparatory actions, but does not speak specifically to monetary compensation, because of the difficulty in quantifying the claim and the potential push back by the beneficiaries.

I believe, that financial reparations, is the best way to give substance in making amends to the wrongs committed. Whereas the countries concerned may cite fiscal difficulties as an impediment, I am of the firm view, that creative mechanisms could be found to provide the fiscal space to settle the challenges.

For example, compensation of one percent of the GDP of the European countries that were involved in the transatlantic slave trade and the barbarism of slavery, would yield one billion dollars annually. This could retire an estimated two trillion reparations debt, at two percent over 25 years.

Financial settlement is a critical component to our reparatory claim to achieve justice and restore equity. Therefore, we should not be intimidated to make a financial claim to complement any “in kind” settlement that may be offered bearing in mind that, in kind settlements could be easily inflated.

It is well known that the factors of production available to supply goods and services to an economy are: land, labour, capital and enterprise, all of which come with significant value.

If land is utilised in a business, the economic value to acquire the land must be paid. Capital attracts dividends and interest as compensation and entrepreneurs are rewarded monetarily for their time and skills by the payment of salaries, wages and dividends. This brings us to labour which also comes with a cost and attracts financial compensation in the form of salaries and wages.

Three Million Africans working for 400 years, 16 hours a day, at a meagre rate of ten cents an hour, would have created a debt of two trillion dollars, without taken into account the time value of money, interest, opportunity costs for investment, or compensation for the atrocities associated with slavery and colonisation.

The labour costs alone of our forebears, would have created a debt of approximately two trillion dollars, which must be repaid to restore international developmental equity between the Caribbean States and the European States who exploited them.

There is a notion that our call for reparatory justice is a frivolous claim, and that we are wrongfully blaming European nations for our under development and consequently, we live in a state of paralysis, waiting for handouts.

That notion as I said before is very different from reality. It is false.

Contrary to their claim, our call for reparatory justice does not make us mendicants or laggards.

There is irrefutable evidence that our forebears are owed trillions of dollars for their work over a period of 400 years with little or no compensation.

In addition, we know that our underdevelopment and financial vulnerability were created by centuries of exploitation in slavery and colonialism.

That is why Caribbean countries, in all sectors, driven by the Caricom Reparations Commission, have urged relevant governments in Europe, to repair the debilitating social-economic conditions; the destruction of resources,and the dehumanization and genocide of Caribbean peoples’ resulting from the slave trade, slavery and the ravages of colonialism.

The relevant European nations should provide reparations not only because, at last, it would compensate for their development on the backs of our people, but because it is the morally and legally correct thing required to restore equity and resilience.

And, we should be clear. Reparation is not aid; it is not a gift; it is justice to correct the atrocities of the past, that have left our people poor and vulnerable to disease and the ravages of climate change.

Similarly, our request for the provision of finance to support mitigation, adaptation and resilience in small states, such as Antigua and Barbuda against the ravages of climate change, is not begging for a handout.

It is compensation for the damage done to our countries, for the reversals in our economic gains, and for the additional money we must spend, to counter further injurious effects of Climate Change in which we play little part.

The science has shown that the greenhouse gas emissions, from the profligate use of fossil fuels, have resulted in global warming and climate change with all of its consequences to include: frequent and ferocious hurricanes, droughts, floods, ocean acidification and coral bleaching.

We maintain that the emitters must be held accountable and compensate affected states for damage and loss.

Why should we pay for someone else’s greenhouse gas emissions?

Why should we carry the burden for their unsustainable growth model?

Why should our existence be threatened, while they live comfortably within their homes?

Why should we continue to be burdened with unsustainable debt levels and be denied the right of reprieve?

The climate change is far more impactful and consequential on Caribbean States our people because of a lack of financial resources to built resilient homes and infrastructure. The reality is, our people have been left poor, destitute and vulnerable. Therefore, we say that the industrialised countries have a moral and legal responsibility to provide compensation.

Prime Minister Gaston Browne (fourth from left) take a photo op with members of the CARICOM Reparations Commission and the Center for Reparation Research during the Symposium on Western Banking, Colonialism and Reparation at the Starfish Jolly Beach Hotel yesterday PM Browne was the keynote speaker. (Photo courtesy Angelica O’Donoghue)