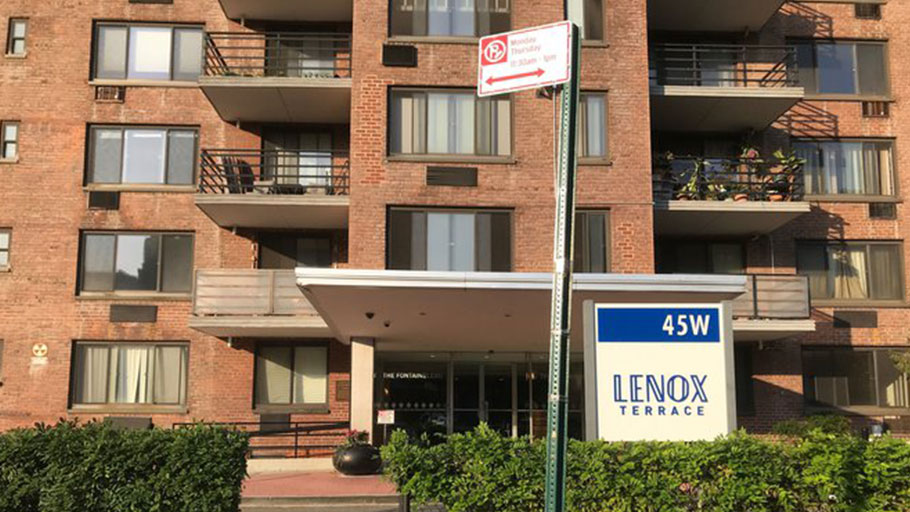 In Harlem, A Rezoning Plan Triggers Fears About The End Of A Black ‘Oasis’

You Are Here: Home » Blog » Gentrification » In Harlem, A Rezoning Plan Triggers Fears About The End Of A Black ‘Oasis’

By Elizabeth Kim, The Gothamist —

In 1958, Lenox Terrace vaulted itself into the rarified standing of being the first luxury apartment complex in Harlem. Built on three blocks as part of a slum-clearing project orchestrated by the city’s master planner Robert Moses, the $20 million development featured 24-hour “gold-braided” doormen, a fleet of porters, parking spaces and balconies that opened to sweeping vistas of the city that stretched as far south as the Empire State Building. The six 17-story brick buildings between 132nd and 135th Streets had their own distinct names, as if to confer an uppercrust pedigree: Devonshire, Americana, Eden Roc, Buckingham, and Fountainbleu.

By the late 1960s, the 1,700-unit complex had become a motley assortment of Harlemites, ranging from the renowned (members of the city’s black political dynasty Percy Sutton, Charles Rangel, Basil Paterson; trumpeter Danny Brown, jazz critic Albert Murray, notorious gangster and bookmaker Bumpy Johnson) to everyday Joes. A 1968 New York Times profile of the Lenox Terrace summed up its occupants as the “affluent and the marginal, celebrities and cliff-hangers, custom-tailored and off-the-rack types, Ph.D’s and blue-collar workers.”

“There was a certain kind of aura about Lenox Terrace, certainly for blacks who lived in Harlem,” recalled Marlene McMillan, who moved into complex as a teenager in 1961. “This was an oasis.”

Now, after weathering five decades of real estate cycles, changes in the city’s (and Harlem’s) fortune, and pitched tenant-landlord battles over rent increases and deteriorating conditions, the residents of Lenox Terrace are facing the prospect of a rezoning that could dramatically reshape their once storied complex.

In what would be one of the most massive New York City residential infill projects in recent memory, the Olnick Organization, which has owned Lenox Terrace since its inception, is seeking to build five 28-story buildings that would contain 1,600 units of mixed-income housing and 160,000 square feet of retail. Among the apartments, 400 would be designated as affordable housing. 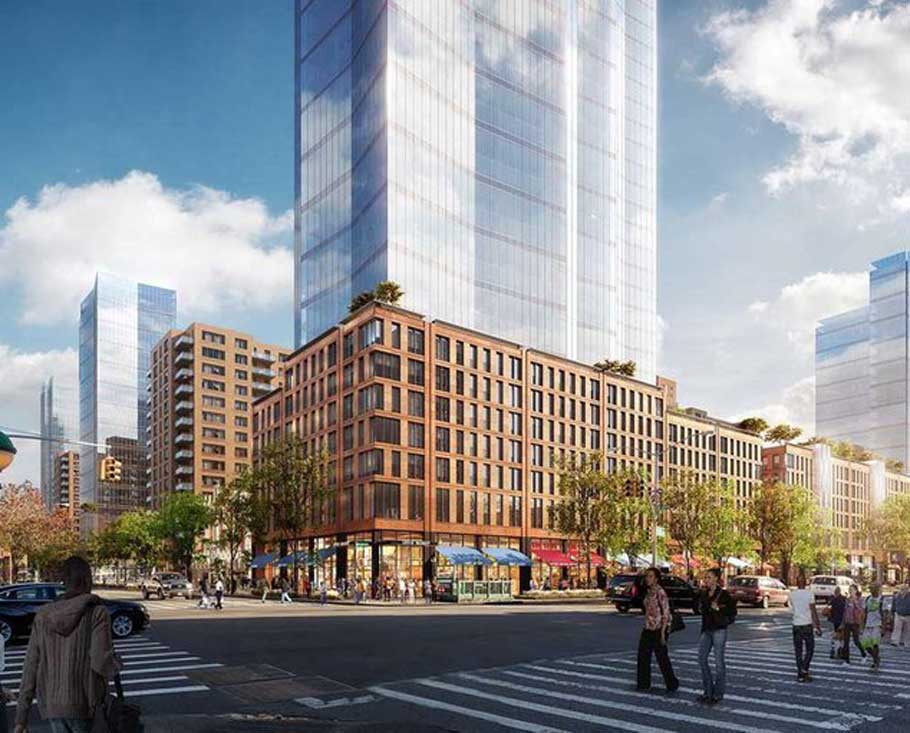 A rendering of the proposed infill project at Lenox Terrace. Olnick Organization

Along with concerns about density and construction, the development battle has stoked existential anxiety about gentrification and the future of Harlem as the epicenter of black American culture.

“It’s changing minute by minute dramatically,” said Michael Henry Adams, a historian and writer, during a packed public hearing last month. “How long do you expect to live there? Maybe your children will live there but not their children. No other black people will live there.”

According to the tenants association, known as the Lenox Terrace Association of Concerned Tenants, roughly two-thirds of the units are rent-stabilized and one-third are market rate. Over the years, the complex, which consists of roughly 4,000 residents, has drawn young white renters seeking values uptown. 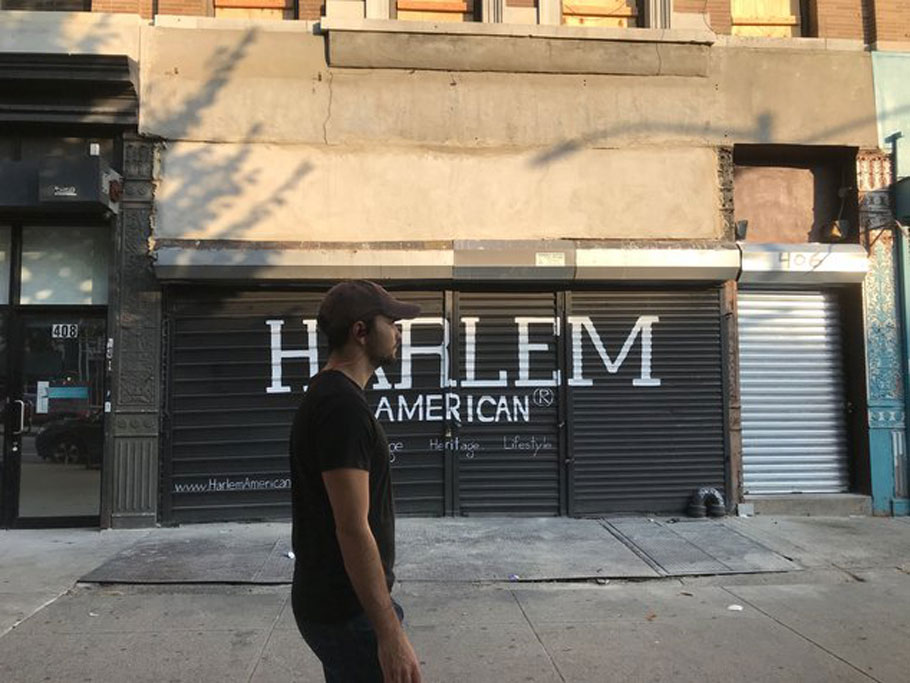 Many tenants believe that a mostly market-rate development would likely hasten that trend, causing the demographic, and more importantly, the racial balance, to irrevocably tip away from the middle and working class blacks that have hung on at Lenox Terrace.

While Mayor Bill de Blasio’s rezonings have increasingly been criticized for focusing on low-income neighborhoods and exacerbating gentrification, some have also argued that the city has ignored racial displacement. In May, the city’s public advocate, Jumaane Williams, introduced a City Council bill that would require a racial and ethnic impact study as part of any land use application that goes through the city’s public review process.

According to Kaloma Cardwell, who has lived at Lenox Terrace for five years, the proposal goes to the heart of the rezoning battle in Harlem. The lengthy environmental assessment for Lenox Terrace addresses a list of potential adverse impacts ranging from shadows to transportation to open space. But in the end, there is no mention of race.

The omission irked Cardwell. A Philadelphia native who works as an attorney, he specifically sought to live in Harlem, which he described as being the “black capital of the world,” because he “wanted to be around people who love black people.” He looks askance at gentrifiers.

“They are less invested in the traditions that make Harlem Harlem,” he said. “Where you sleep and where you live are not the same thing.”

In many ways, the struggle at Lenox Terrace is emblematic of the larger changes that have swept through Harlem in recent years. Lenox Avenue, also known as Malcolm X Boulevard, is dotted with construction sites, interspersed among churches, retail and restaurants.

In a juxtaposition of new and old, Sylvia’s restaurant, the soul food mainstay that opened in 1962, sits one block away from Red Rooster, the so-called “love letter to Harlem” from celebrity chef Marcus Samuelsson.

Further south, 125th Street has ushered in a Whole Foods and a row of national retailers. It has brought a boom in foot traffic, but to some, further erosion in Harlem’s identity and historic character. 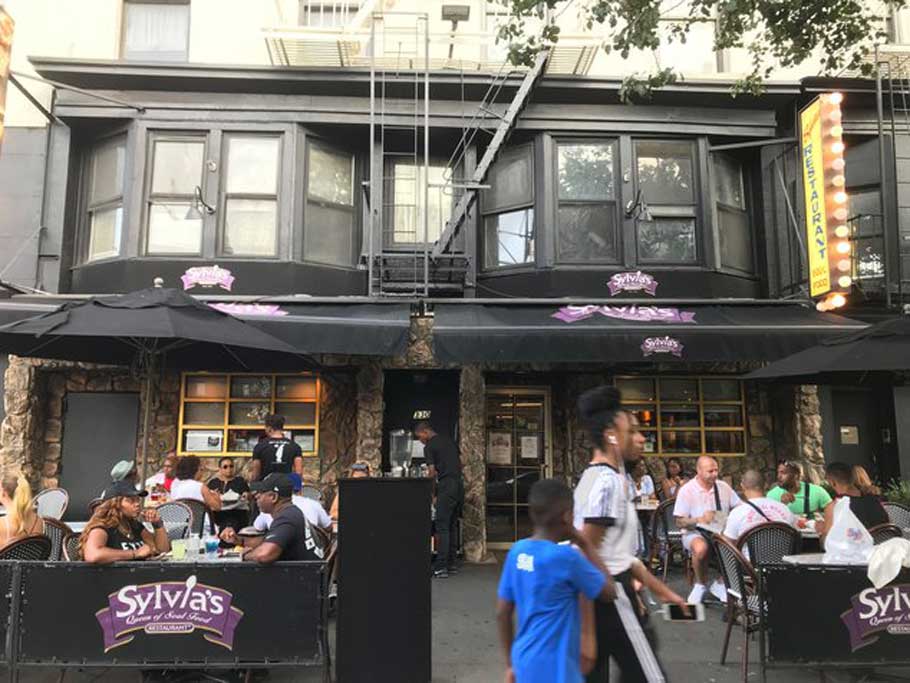 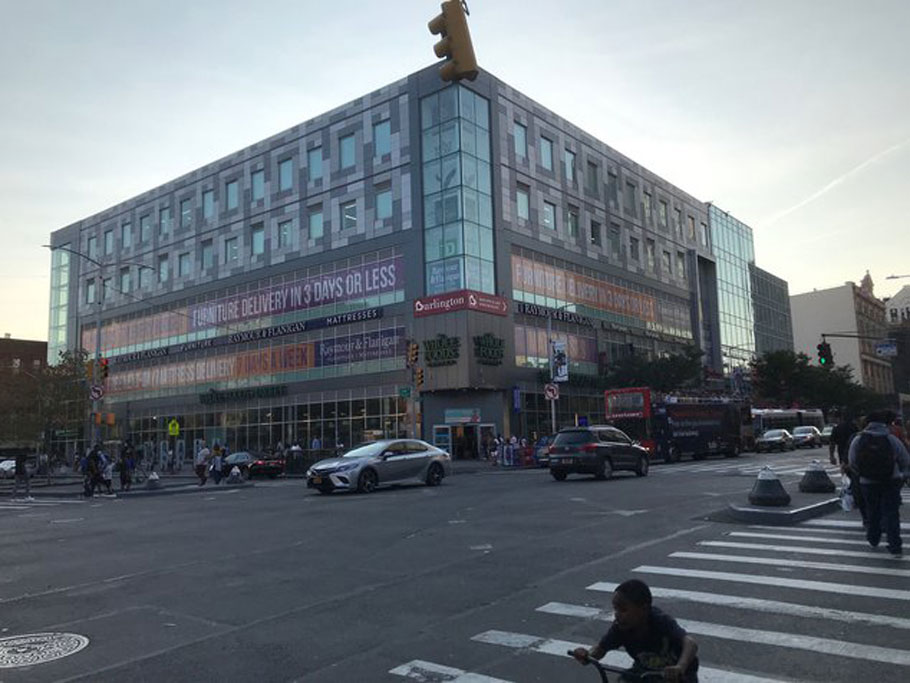 Veronica Glascow, a 74-year-old who has lived at Lenox Terrace since 1977, said that when her niece recently visited from Maryland, she was disappointed with the changes. “She said, ‘I used to find stuff that nobody else has. Now, it’s the same as going to the mall,'” Glascow recalled.

Worries about commercialization have also surrounded Lenox Terrox. Under the rezoning plan, the amount of retail would roughly double. Daniel Carpenter-Gold, a staff attorney at TakeRoot Justice, which represents the tenants association, said the proposed commercial upzoning is tailored more for big box stores rather than the small to mid-sized retail that the company has said it would build. “Why would they need this [commercial] rezoning?” he said. “Their renderings showed a coffee shop.”

Olnick has argued that the ground floor storefronts surrounding Lenox Terrace have languished in recent years and that the area is badly in need of revitalization. During the hearing, one woman said that she believed the neighborhood could benefit from the retail redevelopment. Tenants, however, have accused Olnick of intentionally keeping the spaces vacant and blighted to build its case for the rezoning.

The relationship between Olnick and the tenants association has long been strained. In 2010, a group of tenants sued the company for illegally deregulating units while it was receiving a J-51 tax break, which is awarded to landlords performing capital repairs in exchange for keeping units rent-regulated. Then in 2015, rent-stabilized tenants charged that their rents had been illegally raised when the landlord inaccurately sought to treat them as preferential-rent tenants.

On top of that, there are the day-to-day complaints, ranging from broken elevators, leaking ceilings, mice and bed bug infestations. The landlord’s refusal over the years to make any upgrades to aging units has fostered animosity from tenants.

Glascow said that when she had to have her kitchen cabinet replaced, the management brought in a used, rusty furnishing from another apartment.

“Even the maintenance man felt bad,” she said. “Had I been there, I would have stopped them from bringing it in. I raised holy hell with everybody about it.”

The cabinet was eventually replaced—10 months later, she said.

As part of the rezoning, Olnick has offered to provide free renovations for longtime tenants. But according to Glascow, “That is not an incentive for us. These are things that should be done.”

Similarly, the talk of new amenities in the form of roof decks, kids playrooms, yoga studios, a gym and six acres of green space has also left older tenants unmoved, if not alienated. They say that these enticements are designed to lure higher rent-paying individuals, not the bulk of existing tenants.

At the most recent hearing, Delsenia Glover, a tenant and housing activist, called the project a “sham.”

“This is not about improving the community, it’s about lining the pockets of the Olnick organization,” she said, to cheering and applause.

At a hearing for a rezoning proposal at the storied Lenox Terrace complex in Harlem. “This is a sham,” says Delsenia Glover, a LT tenant and housing activist. She calls the project “so massive it should be built on barren land.” pic.twitter.com/OUmY6xQyO3

Reached for comment, a spokesman for Olnick issued a statement, saying, “The public review process was designed to give stakeholders an opportunity to provide input and to allow applicants to refine their plans based on that input. We look forward to continuing to listen to feedback and working toward a plan for Lenox Terrace that maximizes benefits for current residents.”

As it now stands, the plan is winding its way through the city’s public land use review process, with an upcoming vote later this month from Community Board 10. Olnick has hired the firm of James Capalino, the city’s top lobbyist with ties to Mayor de Blasio, to work on the rezoning effort.

City Council member Bill Perkins, whose vote is considered decisive, is yet to comment on the plan. His office did not respond to a request for an interview.

Olnick has floated expansion plans going back to 2003, leaving some residents wondering if it will ever really happen. For some older tenants, there is the added sense that the project won’t ever impact them.

“Whatever they intend to do is going to take 10, 15, 20 years,” Rangel, who came under scrutiny in 2008 for renting four rent-stabilized apartments at Lenox Terrace, recently told the news site The City. “I’m 89 years old and I don’t buy green bananas.”

But many other members of the older Lenox Terrace generation have stood up against the project. During the two-hour-long hearing, a flank of elderly residents stood crowded by the door and along the aisles. Many stayed until the end.

At 73, McMillan said that she was unsure if she would live to see the completion of the project. “This is where I’m gonna die,” she said, with resignation.

Still, she has been engaged in the fight. The “unequalness” of the project bothers her as does the prospect of years of construction.

A former New York City transit employee, she said she had lived through personal ups and downs, and watched Harlem transition to a place that, as she described it, sounded uncertain. “We hope to hold on to things that we had in the past, but I don’t know. It’s really different,” she said.

Throughout those 60 years, she has lived in Lenox Terrace. “I’ve never wanted to move anywhere else,” she said.