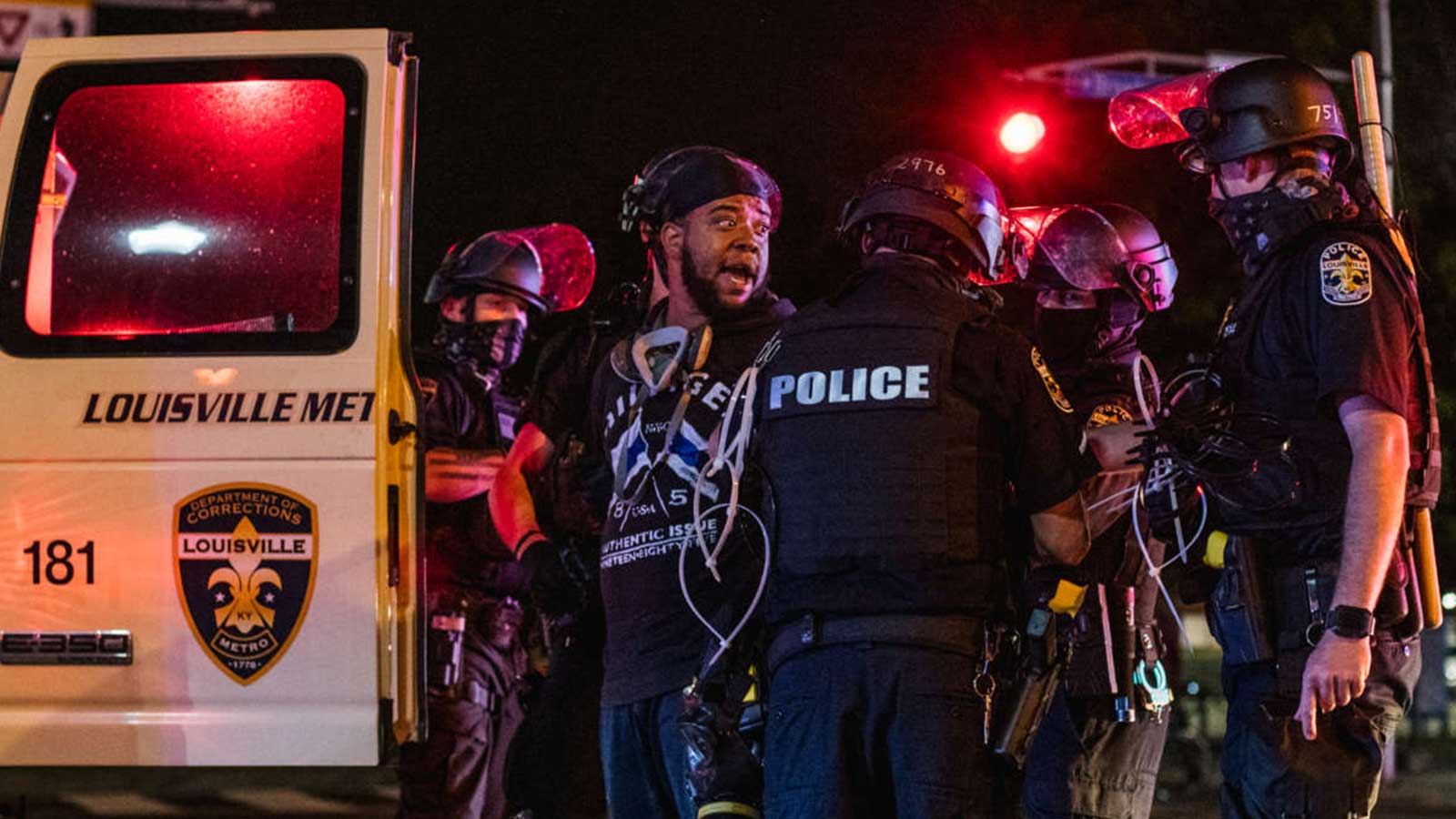 You Are Here: Home » Blog » Commentaries/Opinions » Over 100 anti-protest bills have been introduced since George Floyd rebellion

This June, a dangerously low-flying helicopter operated by the Department of Homeland Security descended on the largest civil disobedience action yet against the Line 3 pipeline in Minnesota. In an attempt to disperse the crowd, hundreds of demonstrators were pummeled with debris — and misdemeanor trespassing charges. If Minnesota Republican House Members Shane Mekeland and Eric Lucero had their way, demonstrators and anyone involved in the organizing process would have been hit with serious felony charges, a $5,000 fine, and liability for any damages incurred by the multibillion-dollar company Enbridge.

Mekeland and Lucero, who introduced these measures in a bill in late February, aren’t alone in their repressive ambitions. Rather than address the onslaught of police violence against Black people or catastrophic environmental degradation, Republican state politicians continue to attack the people rising up against those systemic injustices. As many as 225 anti-protest bills have been introduced in 45 states since 2016 according to the International Center for Non-Profit Law U.S. Protest Law Tracker. More than 100 have been introduced since Black liberation demonstrators took to the streets in June 2020. Thirty-four such bills have been enacted since 2016.

Often backed by organizations affiliated with police unions, the enacted laws encompass a wide range of punitive tactics. Some broaden the definition of “rioting” and “aggravated riot” to allow for dragnet arrests — in which police arrest people for being in the vicinity of an alleged crime — and felony charges with lengthy prison sentences. Some increase penalties for blocking roadways; others deputize vigilante violence in ways reminiscent of the state-sanctioning of white lynch mobs during Reconstruction. Bills pending in Minnesota and Oregon would disqualify people convicted of a protest-related crime from enrolling in public assistance programs, including for food and unemployment.

In an email to Truthout, Traci Yoder, National Lawyers Guild Director of Research and Education characterized the anti-protest laws as “part of a larger trend of conservative, right-wing efforts at the state level designed to counter the goals of social movements.” Yoder said repressive voting rights bills, anti-trans bills and anti-abortion bills are being introduced in the same vein.

Teressa Raiford, founder of Don’t Shoot PDX, an organization focused on racial justice and human rights, told Truthout the laws are attempted to criminalize free speech: “They know that there’s a generation that’s been educated on social justice and human rights. And they know that the Black Lives Matter movement is at the center of uplifting our communities and the engagement and civic participation in politics, and community service. And I think they want to make it stagnant.”

Tennessee’s newest anti-protest law gives credence to disproven “outside agitator” and “paid protester” myths by expanding the definition of “aggravated riot,” which is a felony charge. Prior to this wave of anti-protest laws, Tennessee’s aggravated riot law applied to anyone who knowingly participated in a riot (which, in Tennessee, can simply mean a demonstration that obstructs law enforcement duties) in which an unaffiliated person suffered bodily injury or where there was substantial property damage. Under the new law people who are convicted of aggravated riot, and who either traveled from out of state with the intent to commit a criminal offense or who received compensation for participating in a riot, will receive a mandatory minimum sentence of 60 days of incarceration.

The “aggravated riot” expansion is one of four anti-protest laws enacted in Tennessee since April 2017. In August 2020, Tennessee’s Gov. Bill Lee signed a law that imposes a 45-day mandatory minimum incarceration sentence for anyone convicted of aggravated riot and makes illegal camping on state property a class E felony punishable up to six years in prison. The charge was previously a misdemeanor.

Montana, home to protests against construction of the now-defeated Keystone XL pipeline, added new penalties for protests near “critical infrastructure facilities,” including gas and oil pipelines, in mid-May. Considered one of the most extreme anti-pipeline protest laws in the country, the bill levels up to $150,000 in fines and 30 years in prison against people convicted of protest-related property destruction. Organizations charged as “conspirators” can be charged $1.5 million in costs. Fossil fuel and other extractive industries have contributed funds to the campaign of bill sponsor Steve Gunderson. And anti-pipeline legislation is promoted and crafted by the corporate-backed organization American Legislative Exchange Council (ALEC).

“Republican lawmakers, corporations, and groups like ALEC and conservative think tanks are coordinating to inundate state legislatures with reactionary bills to promote a right-wing agenda,” according to Yoder. “Even if many of these bills do not pass, they create an atmosphere of repression and fear. The small percentage that are successful set a dangerous precedent by slowly chipping away at civil, human, and constitutional rights.”

TC Energy officially canceled the Keystone XL pipeline on June 10. But had Montana’s harsh anti-pipeline penalties been in place during the protests’ peak, that victory for social movements may not have materialized. Still, people have faced, and are facing, fierce repression for their role in protecting the land; Indigenous activist Oscar High Elk is currently facing one felony and 11 misdemeanor charges amounting to 22 years in prison for his role in resisting the Keystone XL pipeline.

In addition to imposing harsher penalties for protesting, the new law in Oklahoma effectively sanctions extrajudicial vigilante violence against demonstrators by providing civil and criminal immunity to drivers who “unintentionally” injure or kill protesters. Similar bills are being considered in Tennessee, Missouri and South Carolina. Bills in Iowa and Washington would shield drivers who injure or kill protesters from civil liability if they claim they acted in self-defense.

The laws repackage an old tactic utilized by the state and police to crush Black liberation movements. Raiford told Truthout that these laws echo the historical collaboration between police and the Klu Klux Klan. “I don’t see any changes. It is 2Pac’s birthday, and I still don’t see no changes,” she said. “This is the same system, there’s nothing new. We’ve always had deputized people that have the ability to partner with the police to oppress people.”

Raiford also said the state is deputizing Black people within their own communities, which isn’t a new tactic. “In our community, in Portland, she said “we have deputized community policing partners.… And it’s like, well, you have a badge and you are ‘community?’”

Although most anti-protest laws have been sponsored by Republicans, there is no evidence that carceral systems in “blue” states were less repressive during the uprisings following the murders of George Floyd, Breonna Taylor, Tony McDade, and others. And some Democrats are playing a supportive role in passing anti-protest bills. In Rhode Island, Democratic State Sen. Leonidas Raptakis is co-sponsoring a bill with two Republicans that would create a mandatory minimum sentence of one year for “knowingly or recklessly interfering with traffic on a highway.” A second offense would carry a three-year mandatory minimum with no option of parole until after one year. And Democratic Kansas Gov. Laura Kelly signed a law in April that created four new criminal offenses, including serious felonies, that punish people trespassing near pipelines and other “Critical Infrastructure Facilities.” (Kansas holds a Republican veto-proof majority.)

Some organizations are beginning to fight back. A coalition of civil and human rights organizations including Organization for Black Struggle, Missouri Faith Voices and the Jewish Community Relations Council protested Missouri’s anti-protest bill in March. And dozens of demonstrators occupied the Oklahoma capitol in April when the governor signed its bill.

The NAACP Legal Defense and Educational Fund Inc., ACLU of Florida, and Community Justice Project filed a federal lawsuit challenging Florida’s new “Combating Public Disorder” bill, which Gov. Ron DeSantis called “the strongest anti-looting, anti-rioting, pro law enforcement piece of legislation in the country.” The bill expands the legal definition of a riot to allow for dragnet arrests, protects police budgets from cuts, increases penalties for blocking roadways and creates a felony punishable by up to five years in prison for any individual who “defaces” or “injures” a statue or flag if the damage is worth more than $200, among a slew of other measures. The suit, which alleges First and Fourteenth Amendment violations, may become the blueprint for legal challenges in other jurisdictions, according to Law 360.

“This unconstitutional and dangerously broad law is in direct response to the 26 million people who protested over the summer of 2020, spurred by the police murder of George Floyd,” Nailah Summers, interim co-director of the Dream Defenders, a civil rights organization based in Florida and plaintiff in the suit, said in a press release. “Our governor used this outrageous tragedy as a political opportunity to silence his critics, play politics, and legislate racism. This law puts our lives, futures, and movement in danger, so we are continuing this fight, along with our partners, in the courtroom.”

While these anti-protest laws are uniquely punitive in unprecedented ways, the U.S. government already has an abundance of repressive laws on the books designed to criminalize social movements and particularly Black organizers. One of the first riot acts in the U.S. was passed by the Massachusetts state legislature in 1786 following the Shays’ Rebellion, an armed uprising of poor farmers against the ruling class. The use of the curfew in American society has its roots in suppressing the movement of Black enslaved people in urban centers. Following widespread Black Power demonstrations and riotous rebellion during the 1960s, state riot laws were updated to become increasingly punitive. And Lyndon B. Johnson’s government passed the federal Anti-Riot Act in 1968.

At least six individuals are still in prison on charges stemming from the Ferguson rebellion in 2014 — years before police unions and Republicans started cooking up this latest round of anti-protest laws. Tomorrow’s dissidents may face even harsher fates.

Still, given the popularity of the Black Lives Matter movement among young people, demonstrations are likely to erupt again.

“When a critical mass goes out into the streets to protest in force, the point is to bring attention to serious structural problems not being addressed through established mechanisms,” according to Yoder. “Instead of expending so much effort silencing and punishing these movements, lawmakers should be listening to their message and trying to understand and address their demands.”

Ella Fassler is an independent writer and researcher based in Rhode Island. Her work has been featured in The Nation and The Appeal. Follow her on Twitter: @EllaFassler.

Source: Truthout
Featured Image: A demonstrator is arrested on September 26, 2020, in Louisville, Kentucky. GOP legislators in Kentucky have since passed a bill to criminalize protest. Credit: Brandon Bell, Getty Images.