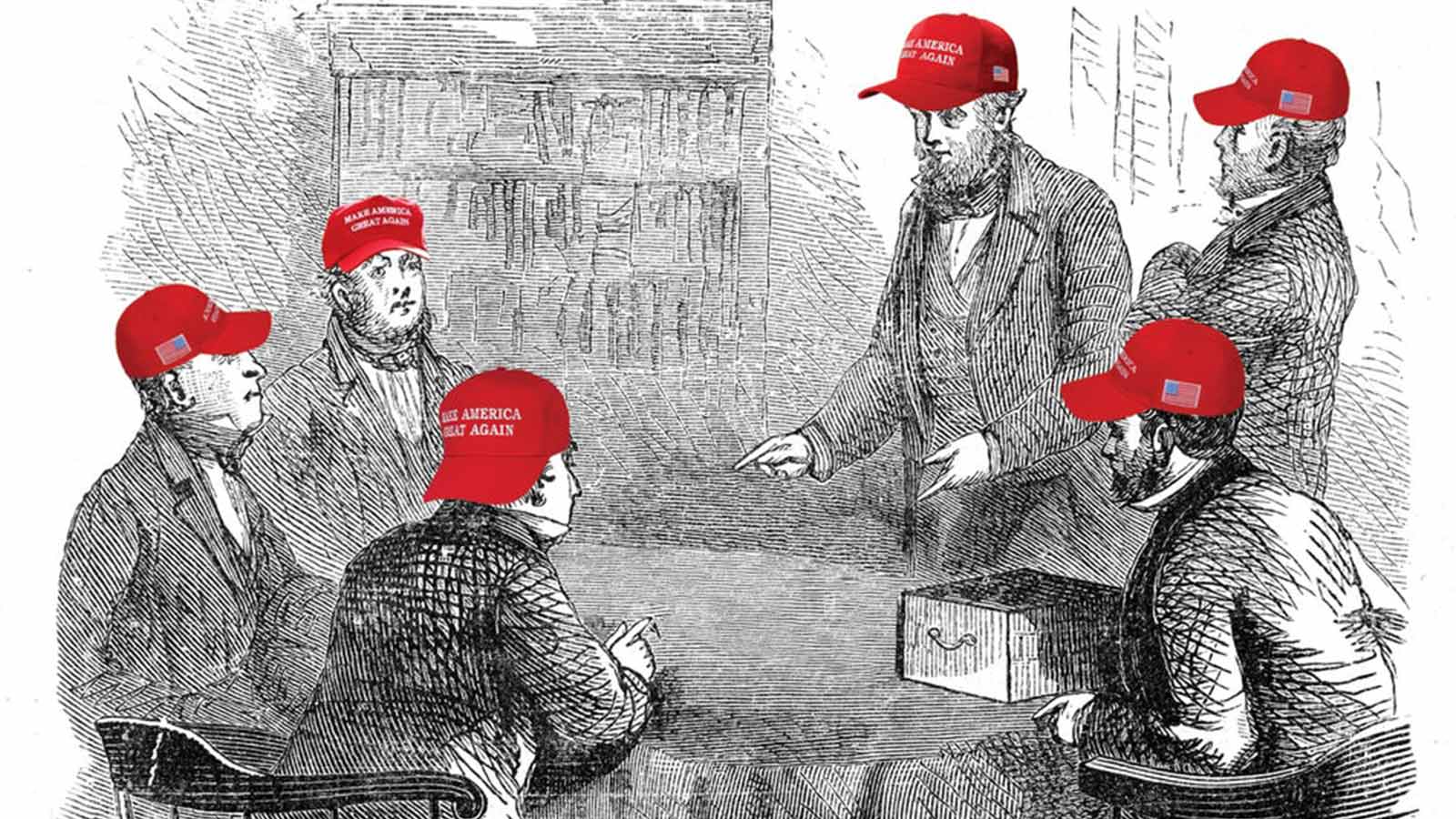 You Are Here: Home » Blog » Commentaries/Opinions » Pro-Trump professors are plotting an authoritarian comeback

On Halloween, the second National Conservatism conference, or NatCon II, will kick off in Orlando, Florida. It is hard to know quite what to make of the lineup for the three-day fest, which boasts a few household names (Senators Josh Hawley and Marco Rubio are both keynote speakers), but also features conspiracist Jack Posobiec of Pizzagate fame. One through line, with a few exceptions, is support for Donald Trump. But the animating ideas come less from the ex-president than from a disparate group of formerly obscure academics.

Media coverage of the Trump phenomenon typically begins and ends with the base—the coal miner at the Midwestern diner, or the MAGA rally crowd. We don’t talk much about the professors.

Since 2016, an array of little-known conservative intellectuals and think tank sorts have emerged as powerful voices in Trump’s Republican Party. Zealous opposition to immigration and so-called woke culture stoked their political ambition. They lent a veneer of much-needed respectability to the Trump administration. And now, despite some genuine theoretical differences, the group is coalescing around an illiberal political project—not just espousing typical conservative policy preferences, but standing against liberal, constitutional democracy in the traditional, nonpartisan sense. Some of the most prominent intellectual voices on the right are openly consolidating around the notion that America needs a radical political transformation, away from rule by and for “We the People” and toward something more top-down and monolithic. At its essence, NatCon II is an opportunity for the big names in this movement to offer a dressed-up, sublimating version of Trumpism.

Today, the conservative intellectuals who first came together in defense of Trumpism and under the banner of National Conservatism are preparing the ideological terrain for a post-liberal America. Not to take them seriously betrays a historical naïveté and a fetishization of the intellect—as if intelligence has never walked alongside moral and political horror—as well as a dreadful overconfidence in the immediate appeal of the liberal democratic worldview.

At first glance, Trump seems like an unlikely champion for any group of intellectuals, and it’s true that many hold him at arm’s length. But some came to appreciate Trump’s irreverence, or what Charles R. Kesler of the Claremont Institute has called Trump’s “courage,” in standing up to the left. A small conservative think tank founded in 1979, the Claremont Institute positions itself in defense of the American Founding and the tradition of natural right and became an early intellectual champion for Trump. In September 2016, the institute published the “Flight 93 Election” essay, which argued, in effect, that it was time for conservatives to put their money where their shock-jock mouths had been for decades. As the author put it, “a Hillary Clinton presidency is Russian Roulette with a semi-auto. With Trump, at least you can spin the cylinder and take your chances.” Rush Limbaugh devoted one of his shows to promoting the piece, and its author, Michael Anton, would later join Trump’s National Security Council. Anton now works for Hillsdale College, whose current president, Larry P. Arnn, chaired President Trump’s 1776 Commission Report, which argued for the promotion of “patriotic education,” prefiguring current Republican attacks on critical race theory.

During the Trump era, the Claremont group took a deliberate turn toward more active political engagement. What once could pass as jingoism and racial ignorance within the institute soon descended into open racism and rank conspiracism. By 2020, Anton and other leaders at ­Claremont were actively promoting the idea of a “Biden coup,” and John C. Eastman, the founding director of the Claremont Institute’s Center for Constitutional Jurisprudence, wrote for Trump a six-point plan explaining how Mike Pence should overturn the election on January 6.

Far from operating in isolation, the Clare­mont contingent has a solid presence in the emerging National Conservatism movement, which is organized by the Edmund Burke Foundation (a new group chaired by Israeli American scholar Yoram Hazony, author of the 2018 book The Virtue of Nationalism). The broader conference is more ideologically diverse than Claremont and includes a good number of religious traditionalists, many of whom take a more decorous approach to politics. But they’ve found common cause. In March 2019, First Things magazine published an open letter entitled “AGAINST THE DEAD CONSENSUS,” which served as an early cri de coeur for the movement. Signatories include Sohrab Ahmari, the opinion editor for the New York Post, and Patrick Deneen, author of the popular 2018 hit Why Liberalism Failed and a professor at the University of Notre Dame. The letter blamed the conservative establishment for its failure to stem the tide of “tyrannical liberalism,” and praised “the Trump phenomenon” for opening up space for new kinds of political inquiry and practice. NatCon I took place in July 2019—Tucker Carlson and John Bolton were featured speakers—and in February 2020 there was a National Conservatism conference in Rome.

The camps are unified behind a divisive and dehumanizing account of their political opponents. On the more temperate end, men like Deneen and Hazony espouse dismissive accounts of how liberal elites’ deepest relationships—with their spouses, their parents, their offspring—are mercenary and free of real love and loyalty. At the other end, there’s the boundless cynicism of the Claremont Institute, which publishes writers who refer to Black Lives Matter activists as evil and liken left-leaning Americans to zombies and human rodents. Across the continuum of illiberal intellectualism, there are apocalyptic cries about the imminent collapse of Western Civilization. The passionate rhetoric abandons any pretense to liberal ideals of reasoned deliberation and contestation within a shared constitutional framework.

Instead, these intellectuals have embraced various alternatives to American pluralism. Deneen has advocated for a political form called “Aristopopulism,” which aims to replace today’s elites with “genuine aristoi,” and he’s defended the idea of using “Machiavellian means to achieve Aristotelian ends.” J.D. Vance, author of Hillbilly Elegy and a current candidate for a Senate seat in Ohio, echoed the thought on Fox News. “If we want a healthy ruling class in this country,” Vance told Tucker Carlson in July, “we should support more people who actually have kids.” The Claremont Institute sees itself as engaged in a world-historical defense of America, which means standing in strident opposition to multiculturalism (the institute likes to call it a “war”).

In searching for real-world alternatives, these intellectuals—especially the traditionalists—have looked abroad, latching on to Viktor Orbán’s Hungary as the best concrete example of their ideal. An open proponent of “illiberal democracy,” Orbán has become increasingly autocratic since he became the country’s prime minister in 2010, consolidating his power around staunch anti-immigration policies and Christian nationalism, asserting state control over the media, bending the judiciary to his will, exerting new controls over public education, and manipulating elections. America’s illiberal intellectuals often speak highly of Orbán, who was an honored guest at the National Conservatism gathering in Rome. Patrick Deneen and American Conservative columnist Rod Dreher visited Hungary in June, and were full of praise. Dreher sees the country as exemplifying “a sustained pushback to the inevitability of global progressivism” and finds it “tremendously encouraging.” Deneen thinks Hungary has a lot to teach America about how the law can be used to support traditional family life and a “genuine kind of human flourishing.”

Meanwhile, the Claremont Institute intellectuals indulge in bizarre, violent imagery and militaristic language. In addition to the notorious deeds of Eastman, they were an important nexus for Trump’s “Stop the Steal” lies and openly flirt with secessionism. In March, one of Claremont’s senior fellows published an essay proclaiming the need for a counterrevolution against the American majority who didn’t vote for Trump. In late May, the think tank produced a podcast that gamed out how a future president might convert herself or himself into a new Caesar.

It’s tempting to think that the worst is behind us. Joe Biden’s Washington is consumed by debates over infrastructure and the social safety net. Republicans in Congress may refuse to acknowledge the realities of what happened on January 6, but for now they can’t implement further anti-democratic measures nationally. However, away from D.C., these intellectuals have taken up Trump’s illiberal baton with gusto. For them, Trump was a trial balloon for what they hope will be an altogether more serious and deliberate political project.

This isn’t just abstract hypotheticals. National Conservatism has ties to prominent GOP politicians. Beyond Hawley and Rubio headlining the NatCon II conference, the Claremont Institute is set to honor Florida Governor Ron DeSantis at its annual gala in late October. Tucker Carlson and former Vice President Mike Pence recently paid separate visits to Budapest. And the arguments coming from the illiberal right are entirely consonant with recent state GOP efforts to limit voting rights, control public education on race, and strictly curtail abortion access. These all cut against the core principles and spirit of American constitutionalism, and yet it is easy to imagine their being deployed by more staid and respectable politicians than Trump; from there, it’s not hard to imagine a more serious autocratic turn for the Republican Party, with violent implications for the country.