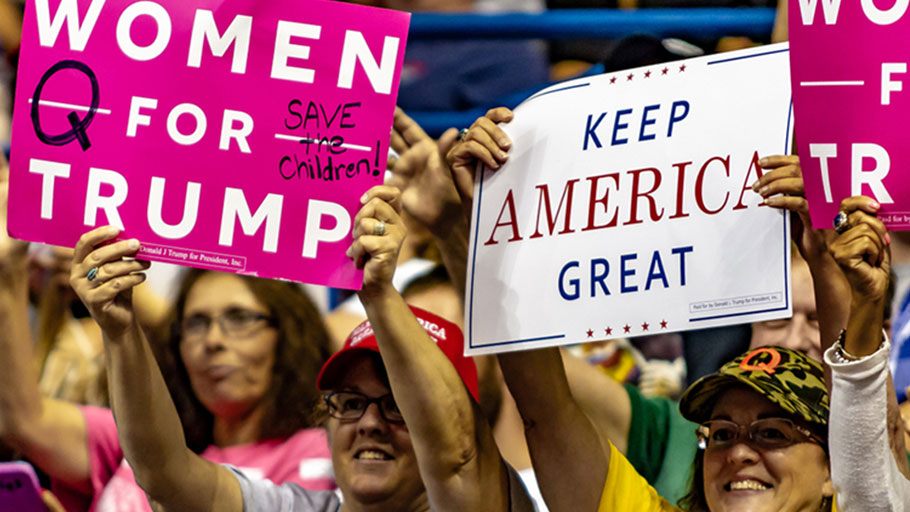 Last year, White people constituted 60% of the U.S. population, down from about 90% in 1950. It’s projected that by 2050, they will be the new minority and people of color will be the majority—a nightmarish prediction to some White people.

Sen. Lindsey Graham voiced his concern of a demographic dilution at the 2012 Republican convention, when he said, “The demographics race we’re losing badly … [Republicans are] not generating enough angry white guys to stay in business for the long term.”

The idea that White people could “go the way of the dinosaur” has been dismissed by some as simple pity of personal circumstance or conspiracy theory, but the convergent effects of new laws banning abortion together with old laws promoting mass incarceration of Black and Brown people suggest that this White fear is not just an idea, but the catalyst for public policy.

There indeed appears to be a strong correlation between demographic projections, the fear of White genetic annihilation, and the recent wave of abortion bills.

Antiracism activist and diversity trainer Jane Elliott described it as a fear so great that White people, including political leaders, “will do anything to see that doesn’t happen.”

Hyper-punitive abortion legislation recently passed in Alabama bans the procedure outright except in cases of risk to a woman’s health, and in Georgia, a woman who obtains an abortion will spend the rest of her life in prison. Of 212 lawmakers in Alabama and Georgia whose votes ushered in the most restrictive abortion laws we’ve seen yet, 211 are White.

What drives all of this is nothing as philosophical as religion. It’s not faith. It’s not principle. It’s the fear of genetic dominance of Black and Brown people.

The late Frances Cress Welsing, psychiatrist and author of The Isis Papers: The Keys to the Colors and The Cress Theory of Color Confrontation and Racism, is well-known for her theory of Black and Brown genetic dominance over the White recessive gene.

“People of color have the capacity to genetically annihilate White people,” she explained, “and unless White people control the reproduction of people of color, we can postulate that perhaps one day there won’t be any White people.”

But Welsing was not the only one who held this belief.

Her contemporary demographer Ben Wattenberg wrote in his book The Birth Dearth that the main problem in the United States is the low number of White births. Wattenberg believed that White people, without a change of course, would lose the numerical majority in the U.S., and would no longer be a White man’s land.

He proposed three ways to address this: Pay women to have babies, increase the number of immigrants, and prevent abortions. The first two, he wrote, aren’t the answer because they would also increase the numbers of Black and Brown babies. But the third, he posited, would solve the “birth dearth” problem because 60% of abortions are performed for White women.

The long-standing framework that once defined a woman’s reproductive rights as essentially her own prerogative is being zealously deconstructed to effect an increase of White births over time.

Since before the nation was formed, White people have controlled the lives and reproduction of people of color.

Not unlike the legal maneuverings that effectively made a person property under American chattel slavery, these anti-abortion laws, to variable degrees, take ownership of women’s reproductive rights, in essence forcibly breeding White women to produce at higher rates.

White patriarchal control over the lives of women but especially women of color isn’t new, however.

Since before the nation was formed, White people have controlled the lives and reproduction of people of color.

Genocide of Indigenous peoples and chattel slavery of Africans and their descendants—a precursor to the criminalization and mass incarceration of Black and Brown people—are our most prominent examples.

Under chattel slavery, African women and their daughters were bred as animals for purposes of economic dominance, the financial benefits, and dividends of which are still being realized today.

In “Un/Re/Discovering Slave Breeding in Thirteenth Amendment Jurisprudence,” author and law professor Pamela Bridgewater describes this as “intricacies of a practice that consisted of sexual domination and reproductive exploitation, designed specifically to facilitate, economically and physiologically, the institution of slavery.”

The war on drugs and “tough on crime” laws have also made long-lasting and devastating impacts on Black and Brown communities, the most significant being the loss of reproductive rights.

Even as some forms of marijuana have now been legalized or decriminalized in most states, many Black and Brown men and some women are incarcerated at higher rates than White people for the same offenses, and in many cases serve longer sentences.

Sociologist James Oleson suggests that the practice of eugenics didn’t disappear after World War II, but was “merely repackaged.” He writes in “The New Eugenics: Black Hyper-Incarceration and Human Abatement” that imprisonment exerts a prophylactic effect on reproduction, and because minorities are incarcerated in disproportionately high numbers, they’re most dramatically affected. In fact, for Black males, “the effect of hyper-incarceration might be so great as to depress overall reproduction rates,” producing “a de facto new eugenics.”

In Gerber v. Hickman, a California district court held that incarceration of inmates “encompasses and restricts … the right to procreate,” that incarceration not only hinders, but also extinguishes reproductive rights and may influence overall fertility rates.

Birth rates across demographics have slowed. But the recent abortion bans favor a fearful White populace.

The Black economic oppression along with mass incarceration of mostly Black men means Black births are likely to continue their decline. Now, as women are under threat of death or life in prison, the bans could forcibly increase White births under the hope of generating an uptick in the national White demographic.

Still, in the foreseeable future, the country will be, as Elliot puts it, “mostly brown.”

White supremacy must be undone — institution by institution
We Need Your Support — Donate, Share, Sign-Up Ways to Support