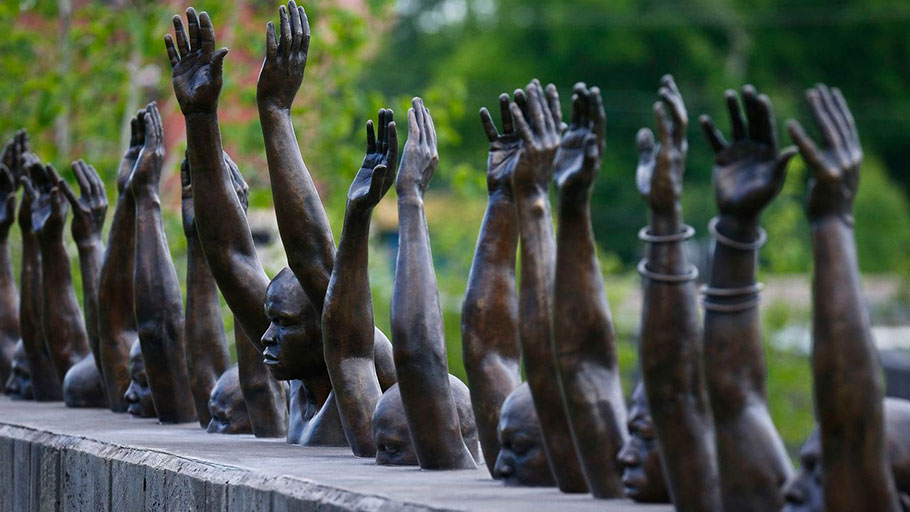 You Are Here: Home » Blog » Editors' Choice » White supremacy must be undone — institution by institution

The bronze statue called “Raise Up” at the National Memorial for Peace and Justice, a memorial to honor thousands of people killed in lynchings, on April 23, 2018, in Montgomery, Ala. (Brynn Anderson/AP)

The national debate on race — which the president has made more angry and urgent with his racial demagoguery — is hindered by imprecise language.

Most whites do not feel personally guilty for the United States’ long history of imposed white supremacy. A white man who has lost his job at the coal mine, or the daughter of a recent Ukrainian immigrant, probably does not regard himself or herself as privileged. And they are not likely to have an emotional investment in the debates over race that have dominated U.S. history.

For a certain kind of conservative, this is the end of the story. The oppressors of black people in the past are dead. Their grandchildren and great-grandchildren, in this view, can’t be held responsible for sins they did not commit.

America’s racial dialogue is distorted by the use of the word “guilt.” To most people, guilt involves a conscious, personal decision to engage in some wrong. But this situation is more complex. Whether they realize it or not, white people in the United States benefit from centuries of enforced white dominance. And their current indifference helps perpetuate the social and economic advantages that have resulted.

What is important is not the feeling of guilt — though many of us might benefit from taking an honest inventory of our personal prejudices. What is important is a recognition that our economic and social systems have been massively rigged in favor of whites and that the unrigging is a continuing political responsibility.

Examining U.S. history for evidence of oppression is a disturbingly easy task. Even a skim reveals a thick layer of scum.

The great rigging began about 400 years ago, when around 20 slaves were brought to Jamestown. The white settlers wrote laws that placed slaves and indentured servants in different categories — allowing poor whites to be slave overseers and permitting black slaves to be punished more harshly. Virginia’s colonial government determined that baptism would not confer freedom on slaves — effectively allowing some Christians to own other Christians. Across the colonies, slavery began to be associated with skin color.

Many Christians employed the Bible to defend slavery, but in the late 18th century some Enlightenment science also purported to prove black racial inequality. The Constitution did not recognize the full personhood of African Americans. One of the early acts of the new republic was to restrict citizenship to white males. In 1854, the California Supreme Court invoked a California state law that said, “no black or mulatto person, or Indian, shall be allowed to give evidence in favor of, or against a white man.” In 1857, the U.S. Supreme Court determined that blacks have “no rights which the white man was bound to respect.”

Slavery itself involved physical and psychological violence on a massive scale, designed to prevent men and women from considering and organizing opposition. Marriage and education were restricted or forbidden, families were routinely separated, and slaves could usually be beaten, raped or killed with impunity.

While slavery eventually ended, economic and political oppression did not. White supremacy was written into Jim Crow laws and enforced by continued public and private violence. Voting rights were systematically denied. “Sundown towns” made it illegal for blacks to remain after dark. And nearly 4,000 lynchings revealed the evil at the heart of dehumanization. Sometimes, thousands of white men, women and children would gather to watch the event. In some cases, fingers of the victim were cut off as souvenirs. Unborn children were ripped out of wombs. Corkscrews were used to tear out flesh. Men and women were beaten and burned to death. And photographs of the victims were turned into postcards.

The list continues. Redlining and restrictive covenants undermined black homeownership. Unions were permitted to lock nonwhites out of better jobs. Educational integration was resisted by segregation academies. Equal justice was resisted by white juries. And some churches gave their blasphemous blessing.

In all this, racism is not primarily a matter of human feelings. It is the systematic use of political, economic, social and religious structures to ensure white supremacy. And no response is serious that does not take the reform of structures seriously.

This does not lead directly to a specific policy. Conservatives and liberals will naturally disagree about how to close the wealth gap between African Americans and whites. (The average wealth of white households is about seven times greater than that of black households.) But such inequality is not a matter of bad feelings. It was consciously and purposely built into institutions over centuries. And it must be consciously and purposely undone.