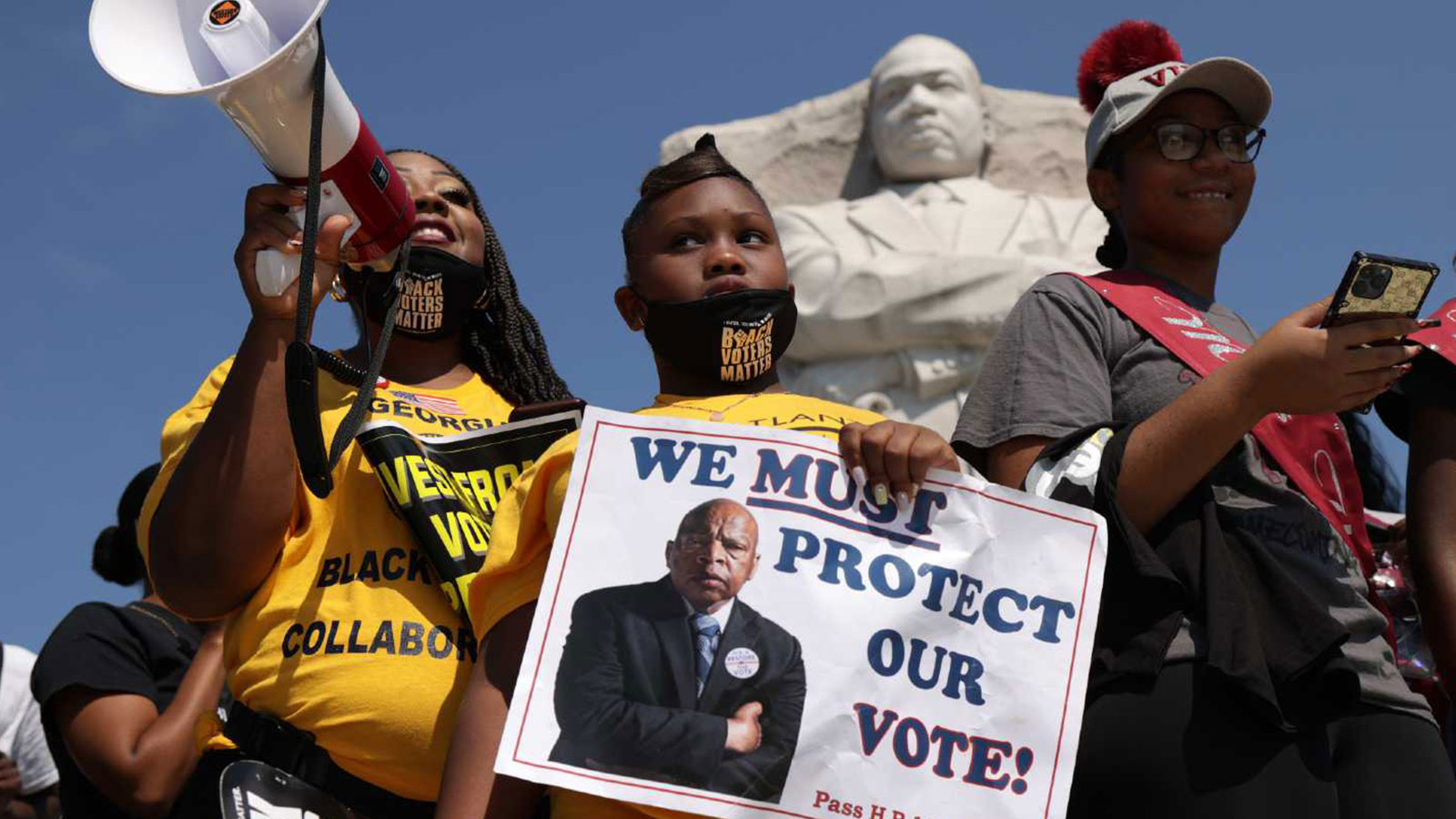 You Are Here: Home » Blog » Commentaries/Opinions » The Party of Lincoln Is Now the Party of Jim Crow

By John Nichols, The Nation —

“Old battles have become new again,” said US Representative Terri Sewell, of Alabama, as she introduced the John Lewis Voting Rights Advancement Act for Tuesday’s essential vote in the House. And even as the old battles are being fought anew, the old battle lines have changed as well. The Republican Party, which was once a more energetic and consistent supporter of civil rights in general and voting rights in particular than the Democrat Party, has united in grotesquely self-serving and destructive opposition to principles it historically championed.

When the House approved the voting rights measure named for civil rights icon John Lewis, every one of the 219 “yes” votes was cast by a Democrat. All 212 “no” votes came from Republicans.

Like their colleagues in the Senate, House Republicans sought to block the restoration and extension of vital sections of the Voting Rights Act of 1965, which were weakened by rulings from a US Supreme Court dominated by right-wing judicial activists. The recalcitrance of House Republicans was all the more jarring because the John Lewis Voting Rights Advancement Act is so clearly needed—along with the proposed For the People Act—to counter a new wave of voter suppression.

“I want you to know,” said Sewell, “that the modern-day barriers to voting are no less pernicious than those literacy tests and those poll taxes. And what we must do, as we did back in the ’60s, is when we see states running amok, we need federal oversight.”

Sewell’s call to action, as someone with deep roots in the civil rights struggles of Selma and the sponsor of the bill, spoke to an essential tenet of the American experiment that Republicans once embraced. Yet, this week, not a single Republicans answered. That’s a far cry from where, in the none-too-distant past, Republicans stood on the issue.

Founded in 1854 by Wisconsin abolitionists and their more moderate allies, the Republican Party was, through the 1960s, a more reliable supporter of voting rights than the Democratic Party, which retained a sizable bloc of Southern segregationists in its congressional caucuses. Leading Republicans took seriously their party’s history and the responsibility that went with it. In the 1950s, Republican President Dwight Eisenhower worked to earn Black votes—with the support of Democrats who crossed party lines to support him, including New York Representative Adam Clayton Powell and Vice President Henry Wallace. In the face of Democratic filibusters, Ike advocated for congressional action on the the groundbreaking Civil Rights Acts of 1957 and 1960. Appealing to supporters of the burgeoning civil rights movement of the era, the Grand Old Party’s 1960 platform declared:

This nation was created to give expression, validity and purpose to our spiritual heritage—the supreme worth of the individual. In such a nation—a nation dedicated to the proposition that all men are created equal—racial discrimination has no place. It can hardly be reconciled with a Constitution that guarantees equal protection under law to all persons. In a deeper sense, too, it is immoral and unjust. As to those matters within reach of political action and leadership, we pledge ourselves unreservedly to its eradication.

True to their word, top Republicans in Congress provided advice, counsel, and support that was essential to the development and passage of the Civil Rights Act of 1964. While Democrats struggled with their party’s internal contradictions on the issue—deferring far too frequently to the demands of the Southern racists who held powerful committee chairs in the House and Senate, and who commanded machines that delivered needed electoral votes—Republicans demanded action. “When President John F. Kennedy failed to submit a promised civil rights bill, three Republicans [Representatives William McCulloch of Ohio, John Lindsay of New York, and Charles Mathias of Maryland] introduced one of their own,” noted The New York Times in recalling the great struggles of the era. “This inspired Mr. Kennedy to deliver on his promise, and it built Republican support for what became the Civil Rights Act of 1964.”

On the critical votes in the House and the Senate 56 years ago, Republicans were significantly more supportive of the Civil Rights Act of 1964 than were Democrats. The measure passed the House on a 290-130 vote, with support from 61 percent of House Democrats (152 in favor, 96 opposed). But Republican lawmakers gave it 80 percent backing (138 in support, just 34 against).

The critical test came in the Senate in June, 1964. Republicans aligned with Northern Democrats to break the segregationist filibuster. A striking 82 percent of Republican senators endorsed final passage of the measure, as opposed to two-thirds of Senate Democrats.

A year later, when the Voting Rights Act of 1965 was under consideration, 16 Democratic senators rejected it, while just two Republicans voted “no.” In the House, 61 Democrats were opposed, as compared with 21 Republicans.

When it came time to renew the Voting Rights Act, Republicans in Congress united with Democrats to support the measures, and Republican presidents signed them into law.

Now, Republicans in the House are 100 percent opposed, and Republicans in the Senate are using the filibuster—the favored tool of Southern segregationists like Democrat turned Republican Strom Thurmond—to prevent voting rights protections from even being considered. Where progressive Democrats and mainstream Republicans worked together to prevent filibusters on democracy issues, no Democrat should be so unrealistic as to imagine that a sufficient number of contemporary Republicans will do the right thing. Tuesday’s House vote confirms that the days of responsible Republicanism are long gone.

The abandonment of the legacy that caused Douglass to write those words is the great tragedy of the modern Republican Party, and of a political process in which one party has evolved from its shameful past while the other has devolved toward a shameless present.