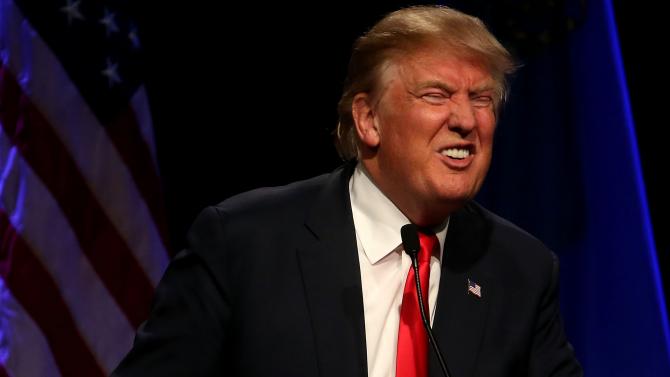 GOP presidential candidate Donald Trump turns Will Rogers famed maxim that he never met a man he didn’t like on its head every time when it comes to race baiting. He’s never met an opportunity to take a racial dig or shot that he didn’t like. This time it’s the Central Park Five case. This has been one of Trump’s long favorite race baiting ploys. He took a big swipe at the five again when he again loudly declared that the Central Park Five are guilty.

Here’s a quick review of the case. The five are the five young African-American and Latino youths who were charged with raping and beating Trisha Meili while jogging in New York’s Central Park in 1989. They were convicted and imprisoned for more than a decade. The five were innocent. Their alleged confessions were obtained illegally, through two days of non-stop police intimidation, coercion, and lies. There was no physical evidence to connect them to the crime.

The actual rapist Matias Reyes confessed in 2002. DNA tests confirmed him as the assailant. Even more telling in the years during the incarceration of the five, Reyes continued to murder and rape women including his own mother. Following his confession judge vacated the convictions of the Central Park who had languished in prison for more than a decade.

After much wrangling between the NYPD, prosecutors, and New York city officials New York finally shelled out more than $4 million to the five in a wrongful conviction settlement in 2014. The Trump vendetta with the case starts almost from the second the rape occurred. He screamed loud and long that the five should be slapped in the electric chair, and even though New York didn’t have a death penalty then, the rape was the best reason why the state should quickly reinstitute the death penalty. Trump didn’t stop there. He plopped down tens of thousands to four newspapers to splash an ad demanding the death penalty for the five.

Trump still wasn’t finished. Despite all the evidence that the five were wrongfully convicted, Trump still refused every plea for him to acknowledge the wrong, and if not apologize, at least drop his incessant baiting of the men. Instead Trump upped the ante when the settlement was announced, he was the first in the door to denounce it, and again declare that the men were guilty. Even this wasn’t enough, now we have Trump again saying, forget the DNA evidence, forget the confession of the real rapist, forget the settlement by the city, forget any and everything that proved beyond a shadow of a doubt the five were railroaded, they’re still guilty. And they always will be he says with Delphic and omnipotent wisdom and insight into the “truth.”

This would almost be either laughable, pitiable, or both, except for one thing. The case more than any other single thing moved Trump from being just another plodding, conniving, business magnate to a coming figure on the political scene. Race baiting the Central Park Five made Trump a political player. It also taught him a lesson that racial demagogues have known for ages. That is how to take a racially volatile issue loaded with hysteria and emotion and twist, bend, and fracture it into an ego, name, and attention getting ploy to move him up the political food chain. Trump hit political pay dirt in race baiting with the five case and he’s never looked back.

His record since is well-known. He was ripped by the Justice Department for blatant racial discrimination in his apartment rentals and when cornered on his racist exclusion he blithely said that if he didn’t his and other tenants (meaning white tenants) would flee from his units and the city. He turned the thinly disguised racist savaging of President Obama into a fine art by stoking hard the phony, fraudulent, and bigoted Birther movement.

On the campaign trail and in the debate with rival Clinton, he’s self-proclaimed himself the “law and order candidate”, the “stop and frisk” candidate “the stop black crime and murder” candidate. These are the ancient and durable racist code words and slogans that arch race baiters have used seemingly forever too tap the raw, racial nerve of millions. Trump banked from day one of his campaign that this would be his ticket to the White House too.

There is really no legal, media, or even logical reason for Trump to dump on the Central Park Five again. The case has been long settled, and it has been out of the news for the past two years. But don’t look for logic here, Trump isn’t, he’s looking for votes. The case like so many other racist quips, digs, and insults that Trump has turned into a fine art has gotten him this far, so why not dredge it up again.

that Trump is an arch-race baiter, but he’s not dumb. He knows that his well-timed racist digs, quips and slurs will get the tongues wagging, another round of invitations on the talk show circuit, and in the case of the Central Park Five an invite to pen his race tinged scribbling’s in an op-ed column. His cynical but Trump got what he wanted. Tons of fresh media attention, a momentary seat at the GOP presidential candidate’s chat table, and starry eyed idolization from legions of ultra-conservatives and untold numbers of unreconstructed bigots. Trump now has the template that he can trot out any time an issue comes up that even has the barest whiff of race, public talk, and lots of media notoriety to it. The Central Park Five is just the latest grist in Trump’s race-baiting mill. Take this to the bank. America’s arch-race baiter will be back at it again.

Earl Ofari Hutchinson is an author and political analyst. He is a weekly co-host of the Al Sharpton Show on Radio-One Network. He is the author of How Obama Governed: The Year of Crisis and Challenge. He is an associate editor of New America Media.