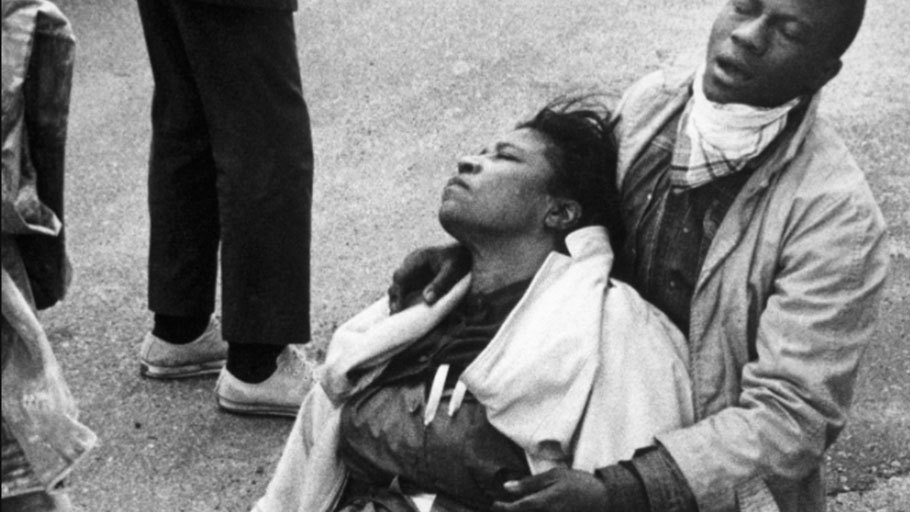 The Voting Rights Act was signed 55 years ago. Black women led the movement behind it.

You Are Here: Home » Blog » Commentaries/Opinions » The Voting Rights Act was signed 55 years ago. Black women led the movement behind it.

A civil rights marcher suffering from exposure to tear gas holds an unconscious Amelia Boynton Robinson after mounted police officers attacked marchers in Selma, Ala., as they were beginning a 50-mile march to Montgomery to protest race discrimination in voter registration.

In March of 1965, Amelia Boynton Robinson walked with hundreds of other protesters across the Edmund Pettus Bridge.

Boynton Robinson, who planned the march from Selma to the Alabama capital of Montgomery along with Rev. C.T. Vivian and others, was struck with a baton by Alabama state troopers that day.

“They came from the right, the left, the front and started beating people,” she told The Crisis, the official magazine of the NAACP, in 2005. “The second time I was hit at the base of my neck. I fell unconscious. I woke up in a hospital.”

A photograph of the incident was widely published in newspapers, and the march, which came to be known as Bloody Sunday, was part of the campaign that pushed President Lyndon B. Johnson to sign the Voting Rights Act months later.

The marches drew civil rights icons including Dr. Martin Luther King, Jr. and late Georgia congressman John Lewis to Selma, but long before their arrival “women were the engine of the civil rights movement right from the beginning,” according to Lynne Olson, author of Freedom’s Daughters: The Unsung Heroines of the Civil Rights Movement from 1830 to 1970.

“Men always got the attention, but the ones who were really organizing it and were really making it work were women,” Olson said. “And that was true going back to the time of the time of abolitionists.”

Boynton Robinson’s mother was a suffragist and she grew up in a “culture of justice,” according to Faya Rose Touré, a fellow activist and lawyer. She said Boynton Robinson and her husband Sam, also a voting rights advocate, came to Selma in the 1920s where they started their own insurance business.

“They saw [voting rights] as a key to the road to justice, to equality. They saw it as the key to end Jim Crow segregation in the South,” Touré said. “They lived long enough and were smart enough to know that voting rights may not be a panacea, but it was certainly something that could be fought for.”

The couple worked with sharecroppers, teaching them about voting rights “in an underground manner,” according to Verdell Lett Dawson, board chairman of the Historic Tabernacle Baptist Church Selma AL Legacy Foundation. When Boynton Robinson’s husband died in 1963, she used his memorial service at Tabernacle Baptist Church as the first mass meeting for voting rights in Selma.

Also in attendance at that meeting was Marie Foster, the sister of a dentist who became interested in voting rights after being denied the opportunity to vote multiple times early in her life. She began holding voter registration classes and teaching people to read in the basement of Tabernacle, Dawson said.

Both women became the first two female members of the Dallas County Voters League, a group that led a voting registration campaign and some of whom would eventually be known as the Courageous Eight.

The group requested the assistance of the Southern Christian Leadership Conference and on Jan. 2, 1965 King formally launched the Selma Voting Rights Campaign, which was led by organizers including Diane Nash.

“Mrs. Boynton really was the organizer of this and I think the person who actually wrote the letter that invited Dr. King and SCLC to come to Selma to help them with the voting rights movement,” Dawson said. 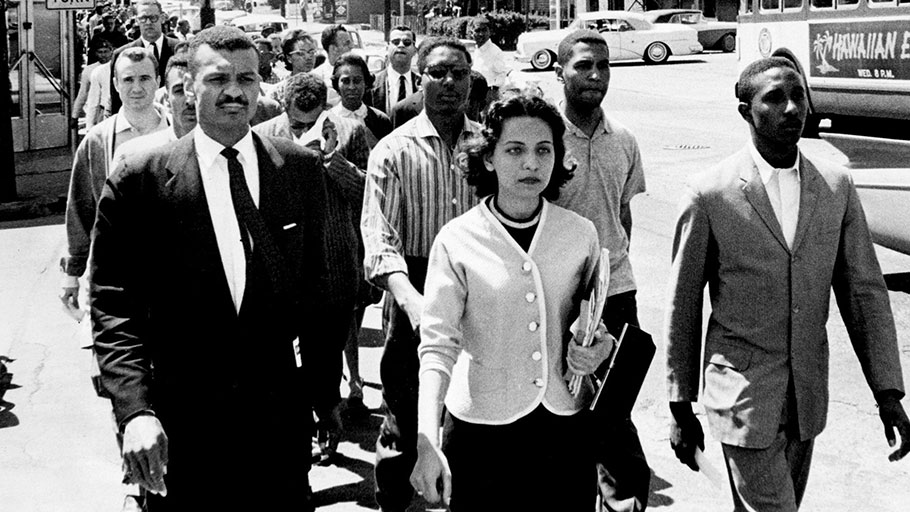 Black leaders march down Jefferson Street at the head of a group of 3000 demonstrators April 19, 1960, and heading toward City Hall on the day of the Z. Alexander Looby bombing. In the first row, are the Rev. C.T. Vivian, left, Diane Nash of Fisk, and Bernard Lafayette of American Baptist Seminary. In the second row are Kenneth Frazier and Curtis Murphy of Tennessee A&I, and Rodney Powell of Meharry. Using his handkerchief in the third row is the Rev. James Lawson, one of the advisors to the students.

Nash, one of the founding members of the Student Nonviolent Coordinating Committee, had organized sit-ins in Nashville and pushed to keep the freedom rides movement afloat, according to Janet Dewart Bell, author of Lighting the Fires of Freedom: African American Women in the Civil Rights Movement.

Nash told Bell the campaign in Selma was a “direct result” of the 16th Street Baptist Church bombing, a white supremacist terrorist attack which killed four Black girls in Birmingham, Alabama, on September 15, 1963.

Not sure if you’re registered to vote?: Check your status.

“She was the general,” Olson said. “They were incredibly important in having Selma turn out the way it did and you know in terms of the Voting Rights Act.”

As the registration campaign and acts of civil disobedience continued in Selma, Boynton and Foster planned the first Selma to Montgomery march for March 7, 1965, Dawson said.

Foster was also clubbed by a trooper during the march. After the footage of the march was broadcast, an influx of people came to Selma to protest putting pressure on the federal government to take action, Dawson said.

Days after being beaten, Foster, who later founded the National Voting Rights Museum and Institute in Selma, walked the entire 50 miles from Selma to Montgomery. 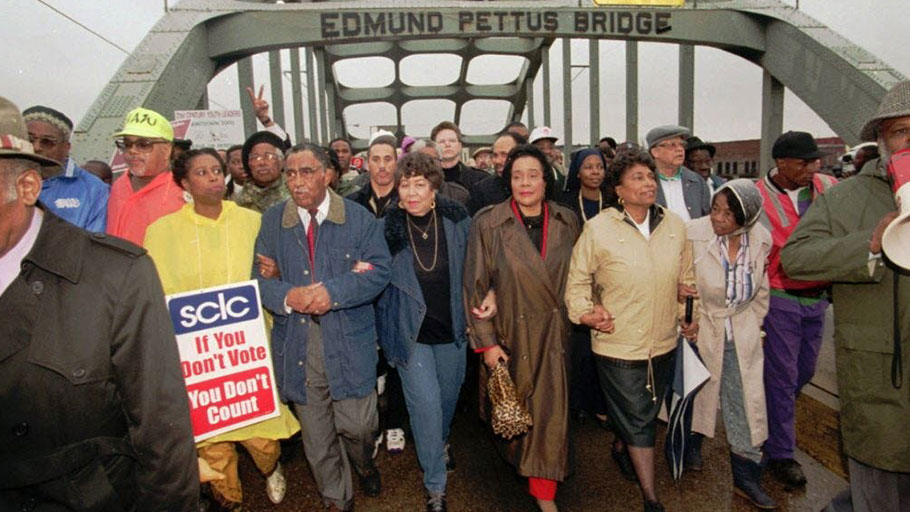 “That was the feeling of commitment after Bloody Sunday,” Dawson said. “We can’t go down like this, we have to keep fighting.”

The Voting Rights Act was introduced in the House and Senate 10 days later and on August 6, 1965, President Johnson signed the legislation. The effects were almost immediate, with Black voter registration increasing by nearly 70% by the next election, according to James Cobb, history professor at the University of Georgia and a former president of the Southern Historical Association.

Research has shown that the preclearance requirement substantially increased voter turnout, driven by minorities, as recently as 2012, but in 2013 the Supreme Court struck down its key enforcement provision, which advocates say paved the way for the return of widespread minority voter suppression.

The call to restore the Voting Rights Act has been in the spotlight following Lewis’ death in July after a battle with cancer. But Dawson agreed that the women who drove the movement of the 1960s largely have not been acknowledged.