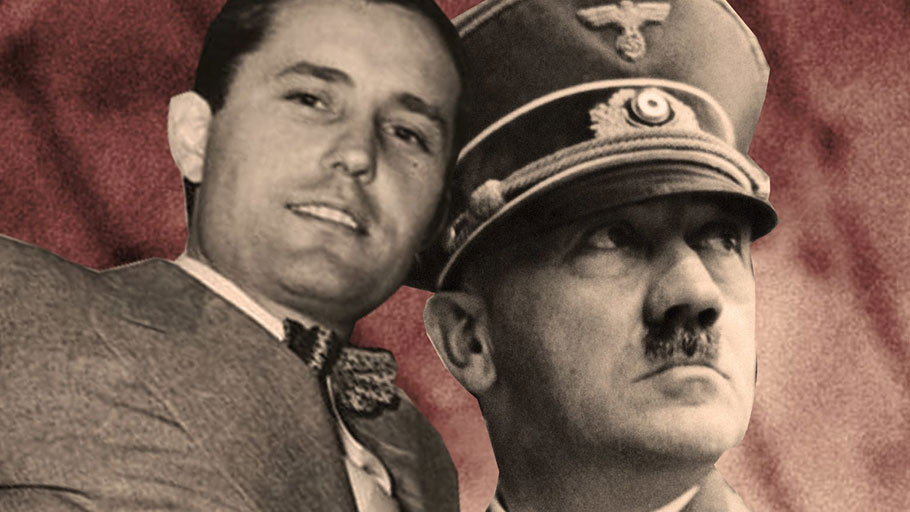 You Are Here: Home » Blog » Commentaries/Opinions » When America Rejected its Homegrown ‘Joe McNazi’

Joe McWilliams was the “handsome,” insidious face for anti-Semitism and other bigotry early in the 20th century.

In the 1930s and 1940s, Americans’ politics was polarizing, ugly. Then, as now, toxic bullies exploited genuine anxieties and Washington’s disconnectedness to legitimize voices once considered too fanatic, and ultimately anti-American in their bigotry despite their “America First” rhetoric.

Back then, decency triumphed. Influential leaders at critical moments rejected the haters, even when they agreed on certain issues. Who knows what will happen now.

We can learn from Madison Square Garden’s huge “America First” rally on May 23, 1941, opposing American intervention in the growing World War. The leading isolationists, from right to left, from the celebrity aviator Charles Lindbergh to the socialist firebrand Norman Thomas, blasted Franklin Roosevelt, warning about an unprepared America stumbling into another European war. A liberal columnist from The New Republic, passionately isolationist, John T. Flynn, rose to speak.

Seeing the anti-Semitic, pro-Hitler thug Joseph McWilliams in the audience, Flynn proclaimed: “The America First Committee is not crazy enough to want the support of a handful of Bundists, Communists, and Christian Fronters who are without influence, without power, and without respect in this or any other community. Just because some misguided fool in Manhattan who happens to be a Nazi, gets a few tickets to this rally, this meeting of American citizens is called a Nazi meeting. And right here, not many places from me, is sitting a man named McWilliams. What he is doing here, how he gets in here, whose stooge he is, I do not know, but I know the photographers of these war-mongering newspapers can always find him when they want him.”

This “man named McWilliams” was despicable. Born in Oklahoma to pioneering parents in 1904, this self-taught mechanical engineer invented an improved razor blade. When he moved to New York City in 1925, he supported Marxism. After a health crisis in 1935, he turned fascist and anti-Semitic, despite the Jewish friends who helped him financially.

By 1939, this handsome young man with an all-American look, was cheerleading Hitler. McWilliams crisscrossed New York City in a flag-draped, covered wagon emphasizing his pioneering roots.  Adoring young ladies surrounded him, labeled, in the day’s sexist parlance “his harem.” He called New York’s Governor Herbert Lehman, “the Jew governor,” and New York City’s Mayor Fiorello LaGuardia, “A Jew parading under an Italian name.” Crowds occasionally chanted “Jew stooges, Jew stooges,” cheering his claims that international Jewry was manipulating America into war. Women peddled pamphlets at his rallies, tracing Franklin Roosevelt’s alleged “Jewish ancestry.” He demanded any hecklers step forward so he could see “their Schnozzle,” perpetuating the stereotype of the big-nosed Jew. Goons often beat any passing Jews – or anyone who looked Jewish.

The Great Depression had many Americans seeking scapegoats. Since the 1880s, more than two million Jews had arrived from Eastern Europe — until anti-Semitic and nativist sentiment convinced Congress to restrict immigration. Bigots deemed this exotic, visible minority Communists – except when Jews were “all” bankers, of course. FDR-haters sneered that Franklin “Rosenfeld,” was running not the New Deal, but the “Jew Deal.” By 1938, Father Coughlin averaged weekly audiences of 3.5 million listeners and 60 percent of Americans polled called Jews “greedy,” “dishonest,” “pushy.”

Fortunately, all-American decency pushed back. Mayor LaGuardia appointed a Jewish cop, Louis Costuma, as the NYPD’s chief inspector, to crack down on anti-Semitic goons. Other officers simply did their duty.

At one rally in the Bronx, on August 13,1939, when McWilliams sneered “we’ll fix the Jews the way Hitler fixed them,” a police captain, John Collins, ended the meeting. McWilliams’ hooligans beat Collins, shouting “Shut up, you Jew.” When Sergeant Robert McAllister intervened, he was hit in his head with a lead pipe. Police arrested two of the thugs, both ex-convicts, only to have the Alexander Avenue precinct besieged by members of McWilliams’ organization, The Christian Mobilizers.

In 1940, encouraged by the crowds, and the anti-war anxiety, McWilliams ran for Congress. He chose the heavily-German 18th Congressional District, encompassing Yorkville, a center of the pro-Nazi Bund. The radio personality Walter Winchell called McWilliams “Joe McNazi,” supported by “Ratzis.” Others condemned “The American Fuehrer.” Predictably, then as now, the publicity boosted McWilliams. The New Yorker reported that he “has often been described as the handsomest and meanest-talking man ever to run for a public office.”

McWilliams’ Republican primary opponent, James Blaine Walker, Jr., was the grandnephew of the Republican presidential nominee, James G. Blaine, and the son-in-law of President Benjamin Harrison. “I shall devote my efforts to proving that the people of Yorkville will not tolerate un-American propaganda under the cloak of a political candidacy,” Walker genteelly proclaimed, intending “not only to defeat McWilliams,” but “to wipe him out of the Republican picture in Yorkville.”

It was a crazy campaign. One night, a policeman arrested McWilliams for disorderly conduct. A judge fined the rabble-rouser $50, insisting that the First Amendment did not protect anti-Semitic rhetoric, because “the words spoken tend to a breach of the peace.” McWilliams appealed, dismissing the “kangaroo court.”

While jailed for 68 days, McWilliams tried running in the general election with his newfound American Destiny Party. Despite submitting 4400 names on a petition to get on the ballot, 1909 names were invalidated, ending his candidacy.

During World War II, McWilliams continued agitating, but the Japanese bombing of Pearl Harbor united America, destroying the America First movement, along with the anti-Semitic fringe.  In July 1942, the government indicted McWilliams with dozens of others under the Smith Act outlawing treason. What some right-wingers now romanticize as “The Great Sedition Trial of 1944,” ended in a mistrial. By 1946, the war was over, the fascists were irrelevant, the charges were dropped.

After his three brothers returned from World War II, McWilliams involved himself in one final, finally constructive, campaign. His Serviceman’s Reconstruction Plan helped shape the G.I. Bill of Rights. He died in 1996, forgotten.

In 1940, when McWilliams lost the primary, the New York Times rejoiced that Yorkville’s mostly German-American residents should be grateful. McWilliams “gave them a good chance to show their loyalty to American principles –and a good chance was all that was needed.” Let’s hope that Americans continue seizing opportunities “to show their loyalty to American principles” of liberty, decency, and mutual respect – and that American leaders learn to denounce haters from left and right, even if their agendas overlap.