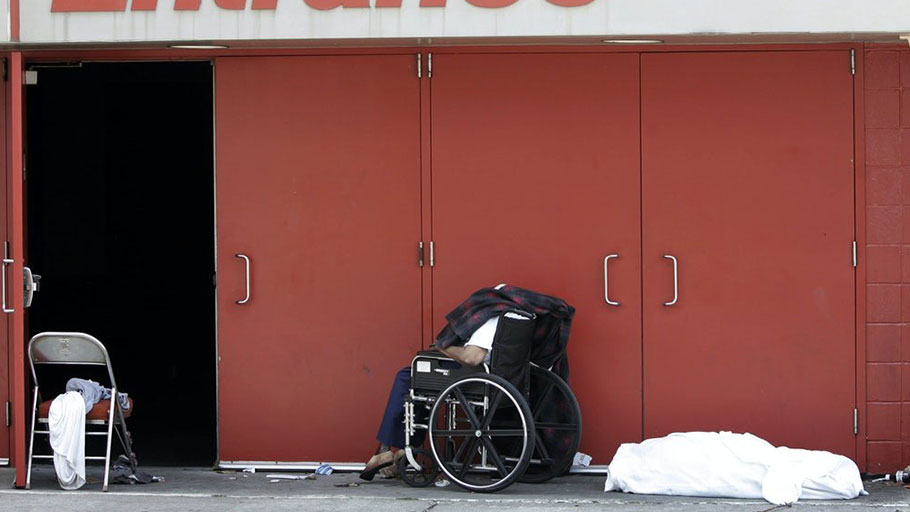 When Blackness Is a Preexisting Condition

You Are Here: Home » Blog » Commentaries/Opinions » When Blackness Is a Preexisting Condition

The body of Ethel Freeman, in the wheelchair, was found outside the convention center in New Orleans after Hurricane Katrina. (Eric Gay/AP/Shutterstock)

Ethel Freeman became famous in death, even though no one knew her name. For months, she was one of the many nameless people who lost their lives in the wake of Hurricane Katrina’s deadly intersection of race and class. Her son, Herbert Freeman Jr., had successfully rescued the 91-year-old retired school employee from her flooded home, but once they were both sheltered, alongside thousands of other displaced hurricane victims in the New Orleans convention center, he could only assure her that help was coming as he watched her life slip away. Nearly four days later, a convoy of buses arrived to transport Katrina refugees to other facilities, and Freeman was forced to abandon his mother’s blanket-covered corpse in her wheelchair. He next saw his mother in a heartbreaking photo of the elderly Black woman, alone in death amid the random belongings of the desperate souls who managed to survive the nation’s shoddy post-Katrina rescue effort. Ethel Freeman became a lasting symbol of a government that failed the most basic responsibility to its citizens in the face of cataclysmic harm.

Covid-19 operates on a much wider and more demographically diverse scale than Katrina did, but we’re certain to encounter the stories of other Ethel Freemans: people of color whose chances of survival were handicapped by generations of human-engineered disasters before they found themselves in the path of a natural one. Their deaths will overtake them silently and without fanfare, unless we are able to speak of common threats in a non–color-blind way that matches the devastating scale of the crisis at hand.

This time around, the tragedy will touch millions of white Americans before it is arrested, many of whom may never have dreamed that they, too, might lose their lives as the most lavishly resourced nation on the planet fumbled again and again in its response to the looming disaster. Some may even awake to the reality that they were never on the “us” side of Trumpism’s us-versus-them messaging—a lethal combination of white nationalist rhetoric and utter disregard for the material well-being of the base that supports him. There’s certainly irony in the reflection that the unvarnished, controversial statement that Kanye West delivered on national TV during a post-Katrina benefit show—“George Bush doesn’t care about Black people”—may take on a prophetic cast for all sorts of people excluded from Trump’s small army of swaddled aristocrats.

Yet if the past is prologue, this swelling of the ranks of the newly dispossessed will eschew a politics of targeted interventions in favor of a rhetoric of rising-tide–ism. “We’re all in this together,” liberal, progressive, and moderate pundits have regularly intoned since the Covid-19 threat overtook the country. This isn’t the time to chart the course of the pandemic’s suffering along the coordinates of race, gender, or other characteristics, they will say.

Today, images of body bags and makeshift morgues vividly capture this unspeakable tragedy. Yet embedded within the national crisis that’s affecting everyone are countless stories of people who were left to fend for themselves long before Covid-19 claimed their lives. We are likely to be assured that these stories should not be highlighted in the tally of mass death, since this virus does not discriminate except against the elderly and those with certain preexisting conditions. Racism should surely count as a preexisting condition—yet to acknowledge as much appears to be a crude assertion from another era, something we can ill afford to consider when the body counts include people of all races.

On paper, Covid-19 may fit the profile of an equal opportunity assassin, but the trajectory of its rampage throughout the United States strongly indicates otherwise. In April, a Washington Post study found that majority-Black counties faced three times the Covid-19 infection rate, and nearly six times the mortality rate from the virus, that majority-white counties did. Confronting these disparities squarely reveals a further truth that the conditions of disparate vulnerability are not just there, but rather reflect the long-term consequences of the nation’s racially and economically disparate response to earlier crises. Rescues past and present illuminate in striking clarity whose vulnerability warrants robust interventions and whose does not.

It’s especially true that the distinctive racial character of American hierarchy has confounded even universalist, left-leaning efforts to address class-based inequality—which means in turn that we’ve repeatedly failed to learn the painful lessons of past emergency mobilizations. The history of modern responses to natural calamities in this country is thus a sobering study in social as well as physical evacuation from the scene of a disaster, following a clear through line of economic abandonment and racial preference. Taking up the frame of a color-blind response in the present crisis flies in the face of this history, and all but guarantees a replay of the same dynamics that put some populations, especially African Americans, in harm’s way in the first place.

When a crisis disproportionately hurts those who are already structurally marginalized, the structural neglect of these factors further entrenches preexisting inequalities. Such failures weaken even what’s “good” about the occasional solidarity and creativity that come in conditions of broad social distress. Consider, for example, the governmental response to the Great Depression, which saw Franklin Delano Roosevelt begin to undertake the most transformative progressive governmental intervention since Reconstruction. Yet from the outset, FDR’s New Deal excluded key groups, such as agricultural and domestic laborers—sacrificial lambs to Southern demands that any enhancement of labor rights not threaten local relations premised on white supremacy.

The same story holds for the expansion of the American welfare state in the postwar years to support the socioeconomic standing of a booming white middle class. The GI Bill and the Housing Act of 1949 virtually shut out Black GIs and the broader Black community. These exclusions were not simply one-off legislative compromises of the moment; rather, they structured white supremacy into socioeconomic aid and disaster relief.

The landmark strides toward racial justice achieved during the civil rights movement were in no small part aimed at undoing the damage that white identity politics had wrought on the labor movement, and the broader effort to increase the bargaining power and economic security of working Americans.

But a good deal of this history, too, has been erased. The civil rights movement is now commonly depicted as a stand-alone racial project, one that bred lethal white resentment and consequently fostered an entire political realignment. It should thus come as no surprise that FDR’s ideological successor, Lyndon B. Johnson, said to an aide upon signing the Civil Rights Act of 1964, “We [Democrats] have lost the South for a generation.” Democrats, the party of FDR, have not carried the white vote since that fateful day in 1964.

And, significantly, today’s Republican Party, which has delivered a $2 trillion bailout to America’s plutocrats and crumbs to working people, enjoys widespread support from the white working class. There is no indication that even in the face of this administration’s utter disregard for their lives, this crucial voting bloc’s loyalties will waver. That’s because the racism definitive of the Republican Party’s post-LBJ incarnation and reinforced in each moment of crisis has metastasized into a seemingly ironclad identification with the spoils of what we might call, following Naomi Klein’s formulation, racial disaster capitalism. The intersectional racism of the 1930s that led to a tainted New Deal didn’t simply die off; it metamorphosed into the intersectional racism that hobbled the civil rights struggles of the 1960s. The legacy of that era, after a generation’s worth of white backlash politics, would go on to shape the intersectional racism of 2005 that left Ethel Freeman to rot outside the New Orleans convention center. And in the Trump era, white racial animus has become perhaps the most powerful force blocking anything like an egalitarian response to disaster.

The reflexive appeal to a post-racial and post-intersectional sentiment in the face of a racialized disaster is itself a key reason that racial disaster capitalism continues to destroy Black lives and Black communities. We’ve been reassured over and over again that some sort of help is on the way—buses and basic provisions in New Orleans; masks, ventilators, shelter, and economic support today. And it will be another promise in the future. Every time I hear that misleadingly hopeful phrase, “on the way,” my heart breaks anew remembering Ethel Freeman’s unheard plea for shelter that never came. Had her story and those of countless others prompted the reckoning that they should have—had the gargantuan intersectional failures that took the lives of scores of Katrina’s survivors been properly centered in our national consciousness—we would be staring down this virus and the multiple inequalities that it exposes with something more than a merely rhetorical invocation of inclusiveness and solidarity. And then, at long last, we might be genuinely prepared to fight for all of us.

Kimberlé Williams Crenshaw is the founder and executive director of the African American Policy Forum.