You Are Here: Home » Commentaries/Opinions » When Southern Newspapers Justified Lynching 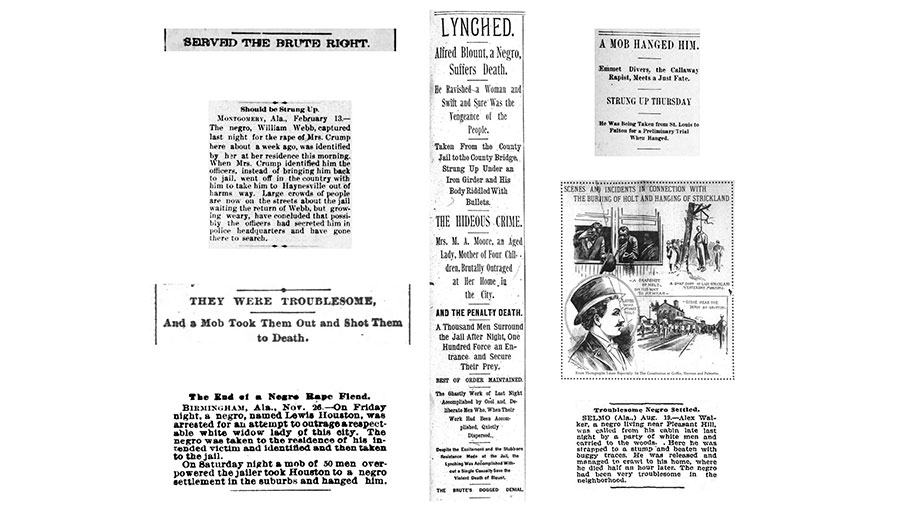 The white Southern press played a role in the racial terrorism of the late 19th and early 20th centuries, which saw thousands of African-Americans hanged, burned, drowned or beaten to death by white mobs.

The Arkansas lynch mob that burned a black tenant farmer at the stake in 1921 observed common practice when it advertised the killing in advance so spectators could mark the grisly event on their calendars. The organizers notified newspapers early in the day that they planned to kill Henry Lowery as painfully as possible, giving editors time to produce special editions that provided the time, place and gruesome particulars of the death to come.

Historians have paid scant attention to the role that the white Southern press played in the racial terrorism of the late 19th and early 20th centuries, which saw thousands of African-Americans hanged, burned, drowned or beaten to death by white mobs. This issue surfaced in dramatic fashion recently when the nearly two-centuries-old Montgomery Advertiser printed a front-page editorial apologizing for lynching coverage that dehumanized black victims. The apology coincided with the recent opening in Montgomery, Ala., of a memorial to lynching victims, and it sets the stage for a timely discussion of a deeply dishonorable period in Southern press history.

The bloody celebration at which 500 jeering spectators saw Henry Lowery burned to ashes was held at Nodena, Ark., on Jan. 26, 1921. Among those in attendance was a reporter for The Memphis Press whose story — under the headline “Kill Negro by Inches” — validated the barbaric proceedings and cataloged the victim’s suffering in lurid detail, noting that Lowery remained stoically silent “even after the flesh had dropped away from his legs and the flames were leaping toward his face.”

Lowery had been charged with a wanton act of murder for killing his white landlord and the landlord’s adult daughter. The renowned lynching investigator Walter White later reported that Lowery had drawn a pistol only after being shot by the landlord’s son and physically attacked by the landlord himself in a dispute over wages. In the eyes of the lynching state — where an African-American could be put to death on a white person’s whim — the impulse toward self-defense was often viewed as a crime when it came with a black face.

Newspapers even bragged about the roles they had played in arranging particularly spectacular lynchings. But the real damage was done in terse, workaday stories that justified lynching by casting its victims as “fiends,” “brutes,” “born criminals” or, that catchall favorite, “troublesome Negroes.” The narrative that tied blackness inextricably to criminality — and to the death penalty — survived the lynching era and lives on to this day.

The Montgomery Advertiser was historically opposed to lynching. Nevertheless, when its current staff scrutinized the paper’s lynching-era coverage, they concluded that it had conveniently opposed lynching in the abstract while responding with indifference to its bloody, real-world consequences. The editors found that the paper too often presumed without proof that lynching victims were guilty and that, in doing so, it advanced the aims of white supremacist rule.

That description applies broadly to the Jim Crow-era South, where even newspapers that were viewed as liberal replicated the apartheid state within their pages — by separating news and birth announcements by race, by rendering law-abiding black people invisible and especially by denying African-Americans the courtesy titles Mr. and Mrs. This humiliating practice was meant to illustrate the impossibility of racial equality. It also let white readers know when a black person was being quoted so that the person’s statement could be ignored.

The newspaper editor Ira Harkey, who was white, incurred outrage in 1949 when he abandoned the Southern journalistic practice of automatically labeling black people by race in stories and began cautiously extending the courtesy title Mrs. in the pages of The Pascagoula Chronicle-Star “to certain carefully selected Negro women such as teachers and nurses.” Harkey was reviled — and shot at — by racists in Mississippi for championing civil rights. He wrote bitterly of his earlier years at The New Orleans Times-Picayune, where there was “a flat rule that Negroes were not to appear in photographs”; it was required that they be airbrushed out of crowd scenes.

The Montgomery Advertiser — known in the 19th century as the leading paper of the Confederacy — put itself on the wrong side of history in countless ways, not least by ridiculing the civil rights movement that was launched by the Montgomery bus boycott in 1955 and reached its zenith a decade later with the march from Selma to Montgomery and the passage of the Voting Rights Act.

Bro Krift, now the paper’s 41-year-old executive editor, was well aware of this history when he greeted the opening of the lynching memorial by devoting the Advertiser’s front page to the names of victims alongside its bluntly worded editorial acknowledging the paper’s complicity. Speaking of the memorial in a recent telephone interview, Mr. Krift said: “I realized, holy Moses, this could change the narrative for the rest of time in America. This could be the physical representation of the conversation we need to have in America.”