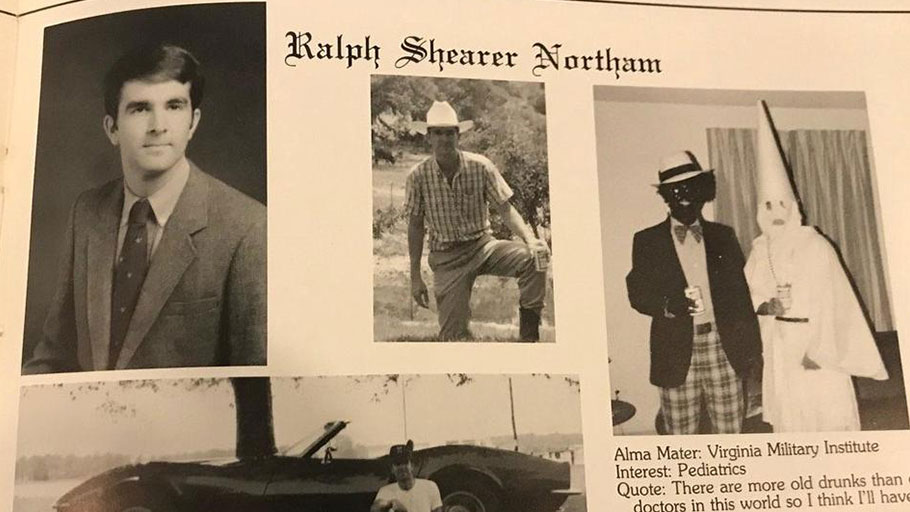 Why the GOP Really Outed Northam

You Are Here: Home » Blog » Commentaries/Opinions » Why the GOP Really Outed Northam

First there was a murky outfit calling itself Big League Politics that plastered all over the place Virginia Governor Ralph Northam’s now infamous medical school yearbook shot of him horsing around in either a Klan outfit or Blackface or both. Then a pack of Virginia GOP legislators piled on and demanded his resignation for his supposedly dastardly racism. Then Trump jumped in with the inevitable tweet and called Northam ‘s retracted apology “unforgiveable.”

Now this from a party that for a half century saw and heard no evil in, let alone condemned, the slew of outrageous racist digs, slurs, and taunts by a gaggle of GOP lawmakers, Tea Party activists, and bloggers. And from the same party and President that feasted on the borderline racial bashing of Obama, this was a swift and stunning turnabout.

There’s not much mystery why this seeming sudden epiphany on race. Let’s take the two headline grabbing examples. Iowa congressman Steve King and Northam. They are the softest of soft targets. King had virtually made a career out of name calling, slandering, and digging at Hispanics, Blacks and immigrants. GOP congressional and party leaders were stone silent on King. It took a resounding defeat in the 2018 midterm elections that cost the GOP control of the House for the GOP House leaders to strip King of his House committee post and unanimously condemn him.

Northam is even easier pickings. He is a Democrat. He takes fairly moderate to liberal positions on everything from expanded Medicaid coverage to tougher gun control regulation to his pro-choice stance on abortion. He is also regarded as somewhat of a political turncoat having been once a long time Republican who voted for Bush twice. As a governor that made him a special threat since he was a politico who might be able to work both sides of the political aisle in Virginia and get something done legislatively. This poses an added peril to the GOP. He might serve as a model for a former GOPer who turned his back on the party, and as a Democratic governor in a key swing state could serve as a model to spur a shake-up within the GOP. The shake-up would be stirred by the GOP’s mounting worry over the fast-changing voter demographics that are turning states such as Virginia from one-time deep Red to various shades of blue. That potentially means loss of more state houses, governorships, such as Virginia, the senate and eventually the White House.

Northam, like King, was the perfect patsy for the GOP to feign righteous, and very hypocritical, indignation over racism. That feigned and crass politically motivated indignation hardly represents any Saul of the Damascus epiphany on race by the GOP.

Peddling, pandering to, or ignoring racism and racists within and without the GOP has paid and continues to pay politically well for the GOP. A tip came during a cable talk show appearance in 2010, when Senate Minority Leader Mitch McConnell flatly refused several direct, angled, and nuanced efforts to discuss racism in the Tea Party. The NAACP had just passed a resolution demanding that the GOP speak out and speak out loudly against the racists among them. But McConnell was having none of it.

McConnell’s duck and dodge of the issue was no accident. He and the party would cut its throat if it denounced its racists and racism, and really meant it. That was on grotesque display during the Obama white House years. The shouts, taunts, spitting, catcalls, Obama as Joker posters, n-word slurs, Confederate and Texas Lone Star flag waving by some Tea Party activists, and the deafening silence from GOP leaders was an indispensable political necessity for the party.

Trump has used racial bashing to masterful effect to reignite the GOP’s traditional white rural, none college educated and low-income blue-collar workers. He stole this from the GOP’s ancient playbook. The GOP could not have been competitive during the 2008 and 2012 campaigns, and most importantly the 2016 presidential campaign, without the bailout from these voters.

GOP leaders have long known that blue-collar and a significant percent of college educated, white male voters, who are professionals, can be easily aroused to vote and shout loudly on the emotional wedge issues, with immigration now front and center on the list. These are the voters who GOP presidents and aspiring presidents, Nixon, Reagan, Bush Sr. and George W. Bush, McCain and Romney, and an endless line of GOP governors, senators and congresspersons have banked on for victory and to seize and maintain regional and national political dominance.

When Northam turned turncoat on abortion this sent a flag high up within the GOP to find any dirt it could to embarrass him and create enough outrage that hopefully could prompt his ouster. So, there is no sudden moral outrage over a racist photo of Northam at work her. This is brutal, cynical and dirty politics. This and nothing more are why the GOP outed Northam on race.

Earl Ofari Hutchinson is an author and political analyst. He is the author of the forthcoming Why Black Lives Do Matter (Middle Passage Press). He is a weekly co-host of the Al Sharpton Show on Radio One. He is the host of the weekly Hutchinson Report on KPFK 90.7 FM Los Angeles and the Pacifica Network.