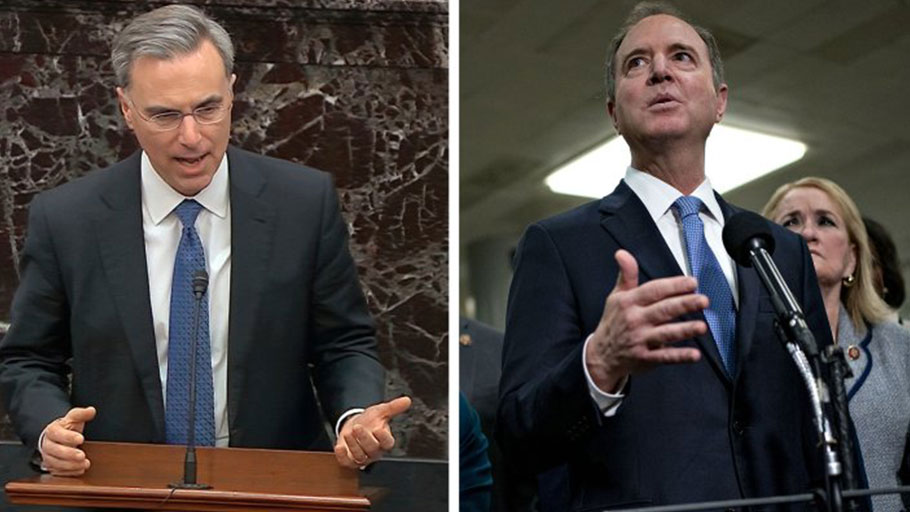 Why the impeachment fight is about more than Donald Trump

You Are Here: Home » Blog » Commentaries/Opinions » Why the impeachment fight is about more than Donald Trump

Return of the Imperial Presidency? Why the Impeachment Fight Is About More Than Donald Trump.

As the Senate considers whether to remove Donald Trump from office, there’s more at stake in his impeachment trial than just one man’s political fate. The power of the presidency itself will expand or shrink based on the Senators’ verdict, thanks in part to the maximalist, zero-sum view of the case presented by both sides.

Remove Trump, his defense argues, and the presidency will be weakened for a generation as impeachment becomes a partisan tool. Acquit him, the House managers retort, and it will give carte blanche to future presidents to abuse their power at the expense of the American people. “The Senate’s verdict on the articles of impeachment will either rein in or unleash the president’s ability to use the federal government’s vast powers for his own political ends,” says Ken Hughes, an expert on abuse of presidential power at the University of Virginia’s Miller Center.

Trump’s defense team has advanced a robust view of executive power throughout the trial. While Trump often proclaims his July 25 call with Ukrainian President Volodymyr Zelensky was “perfect” and that there was “no quid pro quo,” his lawyers have gone much further. They claim that even if Trump did leverage military aid to Ukraine for his own personal political purposes, that’s not an impeachable offense. “If a president does something which he believes will help him get elected in the public interest, that cannot be the kind of quid pro quo that results in impeachment,” attorney Alan Dershowitz asserted Wednesday.

Democrats immediately jumped on his comments, and Dershowitz attempted to clarify his position in a series of tweets the following day: “I did not say or imply that a candidate could do anything to reassure his reelection,” he wrote, “only that seeking help in an election is not necessarily corrupt.”

Dershowitz went too far even for some people who are critical of the impeachment process. “Clearly everything that a president does in office will come with a patina of politics,” says Jonathan Turley, a professor at George Washington University Law School who testified as a Republican witness before the House Judiciary Committee in December. “However, this argument would make that common denominator into an absolute defense.”

While Dershowitz’s comments were arguably the most controversial of the question and answer period of the trial, it was another lawyer on the president’s team who may have engaged in the most consequential exchange. The first question on Jan. 29 was posed by Republican Senators Susan Collins of Maine, Lisa Murkowski of Alaska, and Mitt Romney of Utah, perhaps the most moderate and undecided of the GOP conference on the impeachment question. “If President Trump had more than one motive for his alleged conduct, such as the pursuit of personal political advantage, rooting out corruption and the promotion of national interests, how should the Senate consider more than one motive in its assessment of article one?” they asked.

Deputy White House Counsel Patrick Philbin responded by arguing that even if Trump had some personal or corrupt motives in his withholding of military aid to Ukraine, it still is not an impeachable offense. “It would be absurd to have the Senate trying to consider, well, was it 48 percent legitimate interest and 52 percent personal interest? Or was it the other way, was it 53 percent and 46? You can’t divide it that way,” Philbin said. “Once you’re into mixed motive land, it’s clear that their case fails. There can’t possibly be an impeachable offense at all.”

The vision of the presidency that emerges from this defense is broad and in some cases barely checked, one in which the chief executive has extremely wide latitude under Article II of the Constitution to act according to his own purposes. “Subjective motive alone” cannot be the basis for impeachment, Philbin argued.

This line of argument also gives broad justification to Republican senators to acquit Trump. Following the defense’s theory, even if senators do believe the House’s evidence that Trump acted in his own self interest to freeze aid to Ukraine, if there is any possible legitimate reason he may have withheld the aid, it wasn’t an abuse of his power. Further, the defense lawyers argue, removing a president based on this threshold would turn impeachment into a partisan weapon. “We’ve never been in a situation where we have the impeachment of a president in election year, with the goal of removing the president from the ballot,” White House Counsel Pat Cipollone argued Thursday. “They don’t talk about the horrible consequences to our country of doing that. But they would be terrible. They would tear us apart for generations.”

The opposing side makes nearly the exact opposite argument. In the House managers’ view, Trump’s actions already represent an executive run amok and acting contrary to the Constitution, and the consequences would be more dire to leave him in the Oval Office than to remove him. The 2020 election is precisely why Trump must be removed, they say, because his alleged actions in trying to get Ukraine to investigate Joe Biden were an attempt to subvert the 2020 vote. “It strikes at the very heart of what the framers of the Constitution were concerned about,” Rep. Hakeem Jeffries, a House impeachment manager, said on the final day of questions. “Abuse of power, betrayal by the President of his oath of office, corrupting the integrity of our democracy and our free and fair elections by entangling oneself with foreign powers.”

Impeachment and conviction, House Democrats argue, is now the only way to protect against a president acting like a dictator. “What we have seen over the last couple days is a descent into constitutional madness,” Rep. Adam Schiff, a House impeachment manager, said Thursday. “Because that way madness lies, if we are to accept the premise that a president essentially can do whatever he wants.”

Senators on both sides agree on at least one thing: they understand the solemn consequences of the choice they face, beyond Donald Trump. “This to me is all about the future of our democracy,” Sen. Sherrod Brown, a Democrat from Ohio, said Wednesday. “If we vote to exonerate, what’s going to stop the president from getting worse?”

“We’re being asked to invalidate the choice of the people,” Sen. Josh Hawley, a Republican from Missouri, said the same day. “The Constitution does provide for that. It better be pretty darn serious… I would want to think the crime is very, very serious, the misconduct is very, very serious. And I would want to be very sure about it. And here I just don’t see any unlawful conduct that has been alleged.”

This won’t be the first impeachment fight that could renegotiate the balance of power between Congress and the White House. After the Watergate scandal, during which President Richard Nixon resigned in 1974 rather than be impeached, an era of reform began in which Congress ascended in power in relation to the presidency and reined in the power of the office that Nixon had abused. Watergate led to campaign finance reform, civil service reform, intelligence oversight reform and reform of freedom of information laws, notes Hughes, the abuse of presidential power expert.

Schiff himself drew a parallel to Watergate in the Senate chamber on Thursday. “What’s so striking to me is almost half a century ago, we had a president who said, well, when the president does it, that means it is not illegal,” Schiff said, referencing the infamous statement by Nixon. “We are right back to where we were a half century ago, and I would argue, we may be in a worse place, because this time— this time— that argument may succeed.”

“That,” Schiff argued, “is the normalization of lawlessness.”

Despite the impassioned pitches on both sides, the ultimate outcome for Trump has never been in much doubt. It is unlikely that he will be removed from office, given partisan math. A two-thirds majority in the Senate is required for conviction, which would mean 20 Republican senators would need to vote with the entire Democratic caucus to convict him.

“In the end, the presidency won’t be weakened because he won’t be removed from office,” says Julian Zelizer, professor of history and public affairs at Princeton University. “If anything, it will demonstrate just how powerful the president has become.”

This article was originally published by TIME.